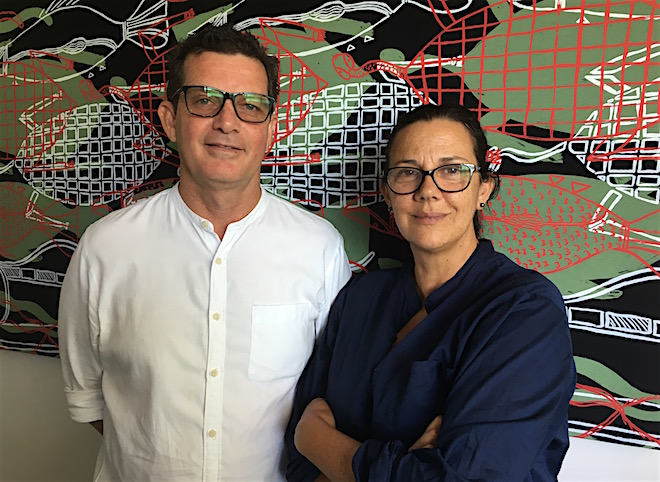 Above: Philip Watkins and Hetti Perkins in front of Ken-ronj (Freshwater Story)  by  Jennifer Wurrkidj.


Co-chairs of the National Indigenous Art Gallery steering committee are looking forward to the release of their full report.

Philip Watkins and Hetti Perkins say the leak of the report to The Australian last week came out of left field for them and it has prompted them to speak publicly for the first time since finalising their work in November.

Both have family roots in Central Australian Aboriginal communities and long careers in the visual arts.

Mr Watkins was formerly artistic and cultural director of Tandanya National Aboriginal Cultural Institute in Adelaide. He is now CEO of Desart, the support and advocacy body for Central Australian Aboriginal art centres.

Ms Perkins was senior curator for Aboriginal and Torres Strait Islander art at the Art Gallery of New South Wales for 13 years. She has been calling for a major national Indigenous art space since her resignation from that position in 2011.

Both believe passionately in the project as they understand it: the creation in Alice Springs of a national Indigenous art museum of international standing – “a place that respects our art in the way that the world does,”as Mr Watkins puts it.

Such standing, they fear, may be compromised by a process that is emphasising location in response to local issues – such as revitalisation of the CBD –  rather than focussing on the vision originally announced and on which the steering committee based its deliberations. 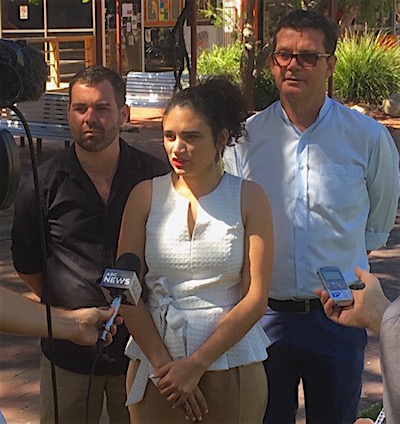 After six months of hard work, the committee handed its report to government in mid-November. Yet the announcement that two sites had been recommended for the gallery and consultations were beginning had already been made, on 2 November. Further, the announcement was made by a member of the committee, then CEO of the Department of Tourism and Culture, Alastair Shields – not by the co-chairs, not by the Minister, an unusual step to say the least.

Right: Minister Lauren Moss announcing the steering committee co-chairs in February 2017. Mr Watkins on her left; MLA Chansey Paech, then Assistant Minister on the project, on her right.

Mr Watkins says the ‘Have Your Say’ consultation that followed lacked any context for site selection and for the project overall.  As a mostly online consultation, it also excluded many Aboriginal people.

It also pitched to lower expectations of the project, says Ms Perkins, for instance by including visuals of a Victorian regional gallery: “That is not a good bricks and mortar model. This is not a regional gallery. We need to aim high!”

“How we get there, the manner in which we get there” is critical to the success of the project, says Mr Watkins. The process is part of building the institution’s reputation as a “centre of international excellence”.

“This is how we will get the buy-in needed.”

That buy-in needs to come first and foremost from Aboriginal and Torres Strait Islander communities around the country, and both warn that this will not be forth-coming if “fissures” are seen.

“It’s something we shouldn’t be complacent about,” says Mr Watkins, “we need to have a consensus.”

Buy-in by other partnerships is also essential. The $50m that government has on the table is nowhere near enough to build a museum with international cachet. Further, as the museum does not yet have a collection of its own, it will be counting on partnerships with public and private collections for accessing work.

Through their contacts with the art world, both Ms Perkins and Mr Watkins are confident that this will happen if a truly excellent museum is created.

Ms Perkins is careful to commend the NT Government for its commitment to creating this museum; to her knowledge, although such a project has been talked about for many years around the country, the NT Government has been the first to put money on the table. She also says the enthusiasm for the project of Tourism and Culture Minister Lauren Moss is “palpable”.

Ms Perkins  is unfazed by the election campaign promise by South Australia’s incoming premier that his government would push for a National Aboriginal Arts Centre and Gallery to be built in Adelaide. Indigenous arts, past and present, have the depth to sustain multiple institutions around the country, she says, and this has long been her view.

Both she and Mr Watkins speak of the privilege of working with a high calibre committee, whose members included Michael Lynch, Chief Executive of London’s Southbank Centre from 2002 until 2009, and Chief Executive of the West Kowloon Cultural District, a huge arts precinct being developed in Hong Kong, from 2011 to 2015.

Mark Wilson, co-CEO of MONA, the Museum of Old and New Art in Hobart, was also on the steering committee. 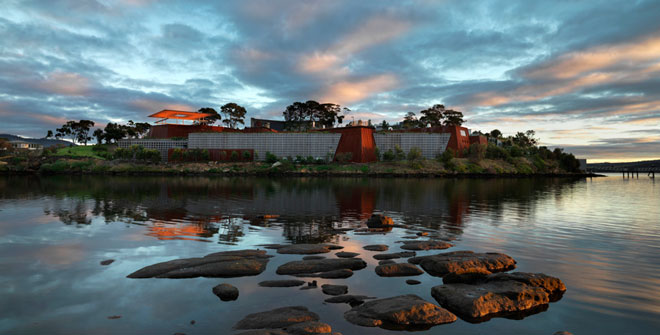 Above: MONA, viewed from the River Derwent. Source: MONA.

Their perspectives helped make clear that the Alice project can achieve other social and economic goals only if what is “best for the art” comes first, says Ms Perkins.

This – putting the art first– was actually the top tip to the committee from David Walsh, creator of MONA.

Opening in 2011, this unique and wonderfully successful museum has been applauded for its benefit to Tasmanian tourism. It is not in central Hobart, as Ms Perkins points out, but in a great location on the River Derwent about half an hour out, and it’s not on the Australian mainland, another potential barrier to travel, yet “More than a million people have visited the hard-to-reach showplace,” as reported in the New York Times in 2015.

MONA  was the main drawcard catapulting Tasmania into the Lonely Planet ’s Top 10 of the world’s must-see places in that year. Its visitation in the year ending September 2017 was 350,000, a 3% increase on the previous year (Tourism Tasmania figures). It was the second-most visited location in Tasmania.

The Guggenheim in Bilbao, Spain is another famed museum that has helped turn around the fortunes of its host city, but says Ms Perkins, in both instances it is because the museums have succeeded in becoming exciting cultural destinations in their own right. Their vision was not compromised by having them respond to other agendas and the government and the community of Alice Springs need to understand this.

The committee believe that the Desert Park is the best location to achieve the project’s vision.

More than any other site considered, it would allow an expression of “connectedness to country”, says Mr Watkins – fundamental for an Indigenous cultural project.

“It’s somewhere where you can understand the grandeur, the majesty of the country, where the museum would have room to breathe,” says Ms Perkins.

Both present and future needs of the museum are a consideration in this regard. The committee was not tasked to look at possible co-location with the parallel project, the National Indigenous Cultural Centre, but the vision necessarily encompasses space for all art forms – film, multi-media, song, dance, theatre, landscaped gardens as well as the visual arts.

When the committee considered the Anzac Hill location, only the high school site was on the table. The oval was added as a possibility later and is “not grappled with in the body of the report”, says Ms Perkins.

However, while location has come to dominate local debate about the project (not surprisingly given the dearth of any other information), both Ms Perkins and Mr Watkins say that the right governance model is more fundamental. The project needs to be led and controlled by Indigenous people. Possible models are discussed in detail in the report, with expert advice provided by committee member Emeritus Professor Helen Garnett.

Relevant examples are to be found in the largely publicly-financed state cultural institutions around the country, the appropriate difference in this case being Indigenous people occupying the board positions. They have the fundamentally relevant expertise of culture and identity and of being the creators of the art.

Both Ms Perkins and Mr Watkins are fully aware that their report consists of recommendations to government and it is government which must now decide.

But, they say, the committee worked on the assumption that their recommendations would be “tested” by further detailed consultations with the community – local, regional and national.

They expect the government to announce its next steps imminently and that their full report will be part of this next phase.

Chief Minister Michael Gunner has just announced the gallery’s site will be Anzac Oval and he has also released the report.