Aboriginal Men's Shed: 'We'll build it ourselves from scratch'

Above: Ken Lechleitner, third from right, with ‘Blokes on Track’. All photos this page courtesy CASSE.

A place for Aboriginal men to be safe: in the present climate it goes against expectations but its necessity responds to the low life expectancy of Aboriginal men in central Australia, their high rates of homelessness, incarceration and suicide, as well as the region’s high levels of domestic violence, with men as perpetrators, yes, but also as witnesses and victims.

Policing and punishment are not providing the answers, as Coroner Greg Cavanagh noted during his 2016 inquest into “extreme domestic violence”. His comments have been invoked in the case for creating an Aboriginal Men’s Shed.

The idea has grown out of a five year partnership between CASSE (standing for Creating A Safe Supportive Environment) and Central Australian Aboriginal Congress. Funded philanthropically, consultations were held over two years to set a direction for empowering Aboriginal men. This led to meeting of a male leadership group.

Doing something about domestic violence soon emerged as a strong priority. Violence programs were needed but so was longer-term support for change. As one participant in week 15 of the 2016 Breakthrough Violence workshop said:

“Nothing changes, when you get out of here, family are still doing the same thing, and your wife might be with some other man. I would bash her and that other man and then end up back here or in prison.”

A new body has formed to push forward the Men’s Shed. Launched last Friday by Ken Lechleitner, it’s called “Blokes On Track Aboriginal Corporation” (BOTAC) and is chaired by Glenn Sharpe. Deputy chair is Troy Appo, treasurer is Kevin Corby. Mr Lechleitner will act as a secretary or coordinator. There are no funds at present, just a business concept, backed by research and an organisational structure made up of men who are “the quiet achievers”: 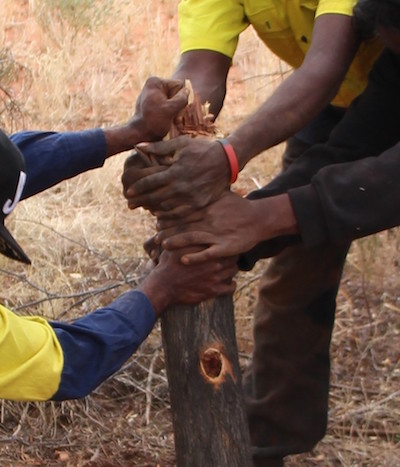 “They have worked all their lives, done all the kind of things the mainstream expects to work between the two worlds,” says Mr Lechleitner.

At Friday’s launch he went further:

“Many of these men you would walk by and not even know that they work above the hurt and pain of putting men and family back together as best they can, while hoping for Aboriginal men to find themselves and stop doing some mean stuff while on the sauce, alcohol …

“These are proud men, who love their wives and children, they are modern day blokes with big dreams.”

They’re also done with all the talking over the last 20 years, they don’t want a report that gathers dust, they want to create  “a grass roots development of men teaching men how to behave and learn to hunt and gather in this modern world through creating employment opportunity.”

They need a parcel of land, where men will build from scratch “a living community for Aboriginal men and fellow Aussie men that are doing it rough on the streets of Alice Springs”.

Negotiations are underway for land on the Iwupataka Land Trust, not far west of Alice Springs.

At the start, there may not even be a shed on the land. Mr Lechleitner envisages a group of men living in tents and working out between them what infrastructure they need and how to build it.

They may decide shipping containers are the way to go. They’d have to work out how to get hold of them and then what’s involved in converting them into a comfortable dwelling, with doors, windows, insulation. Two containers could provide a sleeping area and wet area with a breezeway in between.

Later they will develop a public space area, a restaurant / cafe, a market place.

“What trade certificates do you need?” asks Mr Lechleitner. “Not a lot, just a man with a certificate to supervise the outcome.”

But in this way the men would be experiencing some of what’s required to survive in the two worlds that confront them: having to get up, be motivated, work. 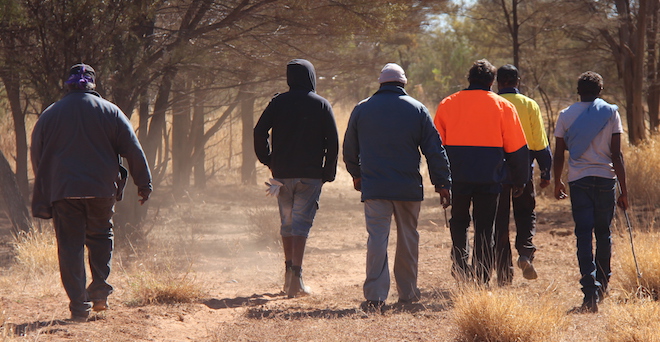 Alongside these kinds of skills, the Men’s Shed would teach cultural principles.

This extends to the protocols of intimate and family relationships: “Nobody comes equipped with that knowledge, you’ve got to see it, experience, talk about it.”

In the Breakthrough Violence workshops – another prong of the CASSE-Congress partnership, run as a “participatory action research process” which Mr Lechleitner led – he said a lot of men reported that “they don’t know how to speak to their other half, no-one is teaching men how to be intimate”.

This was done traditionally in the Ingkintja for males, the Alukura for females, but this doesn’t exist anymore, says Mr Lechleitner.

Development of other life skills would be supported, such as staying sober for five days a week, earning your keep, but then on the weekend, managing the kind of recreation offered by the mainstream: how you dine, enjoy wine, for example, “in the right way, not abusing it”.

At the launch Mr Lechleitner also spoke of men’s need to “groom themselves so they are approachable in the streets of Alice Springs” – a subject not often broached in public.

The emphasis of his speech was, as ever, on the unity that should arise from the  “dual heritage and dual responsibility” of all “the people of Mparntwe, that are of all mixed race and religion”.   But “shaping our future together” requires movement on both sides:


“We cannot be leisurely about the cultural divide any more. Let’s start writing the kind of laws that give us this ownership of shared space, with shared purpose in going forward.

“Let’s create a new symbol, put the Aboriginal Flag on top of Anzac Hill, and let that be our pledge of modern citizenry’s approach in managing ourselves, in embracing cultural change.

“We cannot see ourselves as us and them any more, we are invested in each other’s well-being, and in wealth creation.

“Let’s not put our negative past in front of ourselves, because we are never going to have a future if we keep on doing this to ourselves. ”

Meanwhile, the BOTAC committee have their work cut out for them, to develop contract services arrangements with governments and NGOs as a way of funding their vision.

The research report launched on Friday identifies a number of possibilities. For example, Medicare funds could be accessed through Congress for carrying out health checks and providing programs in nutrition, alcohol treatment and violence prevention. Medicare funds could also be accessed through the NT Department of Health for providing palliative care “for Aboriginal men to go to sleep on Country”. And contract service agreements could be negotiated with NT Corrections for providing things like probation support and juvenile diversion programs.

Below: Ken Lechleitner with CEO Donna Ah Chee and Dr John Boffa from Congress on either side of him, and from CASSE, chairperson Robert Springall (far left),  Director of Aboriginal Australian Relations Program, Pamela Nathan (2nd from right), and deputy chairperson Anne Kantor AO (far right). 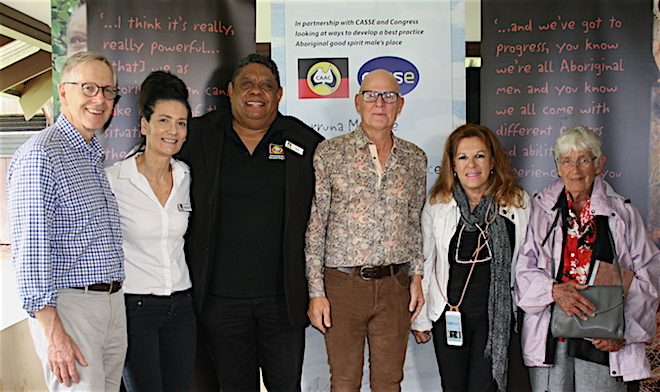