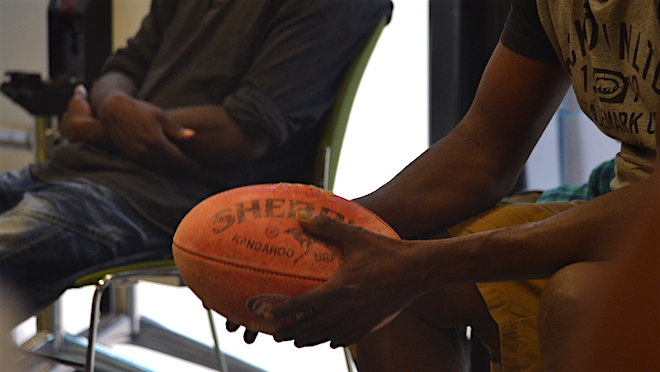 Above: After the footy game is over, what are the rules, who are the umpires? workshop asks.

Disturbing events in Tennant Creek this week, including the alleged sexual assault of a two-year-old girl, are an extreme example of a more widespread lawlessness engulfing the lives of too many Aboriginal people.

This is what a program called Codes for Life is attempting to confront.

Developed by Alyawarre/Arrernte man Michael Liddle, the program is now in its fifth year, evolving as it has been delivered, in Alice Springs, Tennant Creek and a number of remote communities.

Mr Liddle started with the simple observation that Aboriginal men clearly understand the rules of football, play within them and listen to the umpire. He followed with this question: After the game is over, what are the rules and who are the umpires they will listen to?

For a man on the straight path of Aboriginal law – “the journey that takes us from being boys to being men” –  the answers are clear, he says. “That journey teaches us our rules, our responsibilities and obligations.” 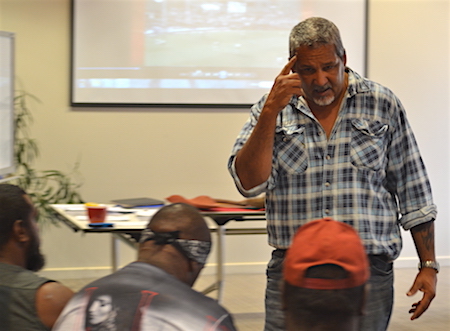 But for many men today these answers are drowned out by the noise and turmoil of heavy drinking and the anguish and shame of events that often follow, filling the hospital beds and prison cells.

A spell in prison in fact offers many men “the only time they get to switch off from the noise,” says Mr Liddle (pictured at left).

But there, they are “just a name and a number”. They might learn some basic skills and get some sense of self-esteem from being sober, disciplined and occupied, but nothing is done “to fix their brain”, to awaken the deep memory of being “either apmereke-artweye* or kwertengerle for their grandfather’s country”.

That’s what Codes for Life aims to do: “It resets the button of who they are as Aboriginal men,” says Mr Liddle.

Before doing anything, he took the concept to his Elders on Alyawarre country during “business camp”: “They said ‘we need this’.”

Together with Anmatyerre/Warlpiri and Western Arrarnta man Ken Lechleitner, he delivered the first workshop in 2013, when he was employed by the MacDonnell Regional Council. Heavily on his mind and the mind of the council at the time was the anti-social behaviour around Alice Springs in the wake of the annual football carnival.

About 15 men attended, their names put forward by Corrections and by a number of footy teams. Some were also personal contacts. Their response over two days was encouraging.

Mr Liddle took the idea with him when he changed jobs and started work at Desert Knowledge Australia as Intercultural Engagement Manager. His supervisors came on board as did sponsors – three local Aboriginal entities, Ingkerreke, Yeperenye and Centrecorp, as well as Mike Bowden who volunteered his time to do a professional evaluation.

The focus is not solely on the rules of the Aboriginal world. The program fully recognises that Aboriginal men today have to act responsibly in two worlds and over the two days the participants hear from the police, from an Aboriginal Legal Aid lawyer, as well as from the keepers of Aboriginal traditions – Elders, and leaders such as Shaun Angeles from the Strehlow Research Centre.

Mr Lechleitner continues to be involved; between them, he and Mr Liddle can communicate in six Aboriginal languages – Arrernte, Alyawarr, Luritja, Warlpiri, Anmatyerr and Pitjantjatjara – as well as English.

There are not many places where men are encouraged to speak in their own languages, says Mr Liddle. It’s part of what makes them comfortable about talking, opening up on what can be very difficult subjects.

The two days are often a very emotional time. There are many lows as men examine what have become the all too common attributes of contemporary Aboriginal  life – diabetes, renal failure,  sexual abuse, domestic violence, drug and alcohol abuse – all of which can drag them back into the cycles they are hoping to leave behind.

But there are also highs as they look through the door onto the ideals of Aboriginal life as laid down by the Altyerre (Dreaming) and the kin and skin system: there they see the possibility of being proud again as Aboriginal men.

The way is not easy. It requires “discipline and maturity” to steer that course: “You can’t just walk through the door, a man has to work for it, to do things for the Elders if he wants to learn,” says Mr Liddle.

“Elders are not in control of us but they are hoping we will take the right path.”

And what about the men’s relationships with women? It is touched on, says Mr Liddle, though he is reluctant to say more apart from the fact that families benefit from men – whether they be husbands, fathers, grandfathers, uncles, brothers – feeling strong in their identity.

That strong sense of who he is brings “a calmness of mind” allowing a man to observe all of the clear requirements of the skin system, about looking after country and their families.

On the scourge of alcohol abuse, Mr Liddle says no program can provide all the answers. Finally, Aboriginal people, individually and together, have to take responsibility for their actions, he says.


* The Arrernte term apmereke-artweye can be understood as ‘owners of an estate’. The apmereke-artweye take care of the estate in partnership with others known as kwertengerle. The English term “boss” is sometimes applied to both roles. This explanation of the terms is sourced from the outline of Arrernte social organisation contained in the determination of Native Title over the Alice Springs area, Hayes v Northern Territory, which can be found here.