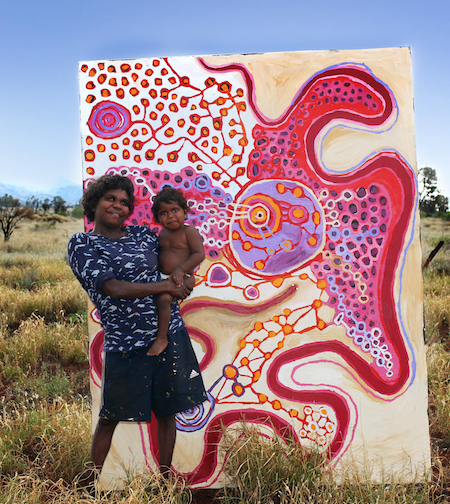 Sharon Adamson was in her senior years at Amata Community School on the APY Lands when she first picked up a paintbrush in the studio at Tjala Arts.  Now in her early twenties, an arts worker at the art centre and a mother, she is also hitting her stride as a painter, with a fluency, joy and command of scale impressive for one so young.

Her lineage might have something to do with it: she is the great granddaughter of the late Tiger Palpatja, one of Tjala’s stars, and she paints the Wanampi Tjukurpa associated with the Piltati site, as he did and with something of his fluid gestural style.

This photograph (at right) of her with her son Walter in front of a recent work has been chosen as the marketing image for the launch of a new APY artist-owned and -operated gallery in Sydney.

It’s the latest initiative of the APY Art Centre Collective, which brings together the seven art centres of the Lands as well as Maruku Arts at Uluru, Tjanpi Desert Weavers based in Alice Springs, and Ara Iritja Aborignal Corporation (which collects and maintains Anangu archives) – a formidable pool of creative brilliance and innovation as well as cultural strength. Their artists have shone in Adelaide’s Tarnanthi, at the Australian War Memorial and the National Museum in Canberra, to mention a few recent examples.

Skye O’Meara, formerly manager at Tjala, is now managing the collective. She says the photograph of Sharon Adamson reflects the priority the gallery will give to young and emerging artists. While Adamson’s work has been exhibited in group shows, for instance at RAFT in Alice Springs and at Outstation in Darwin, she has yet to have a solo.

“She is a committed and prolific artist. You can’t sustain a career without representation and the opportunity of solo shows and we haven’t been able to get her either,” says O’Meara.

That’s also where the market is. The interest in solos, allowing viewers a greater appreciation of an individual artist’s preoccupations and style, as well as in group shows with a more considered curatorial approach demonstrates “a level of maturity in the industry”, says O’Meara. 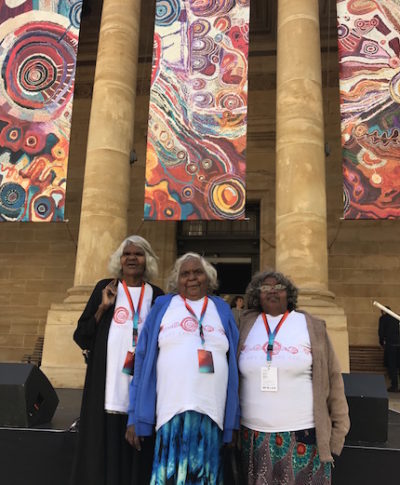 But at the same time there are fewer opportunities after many galleries closed their doors in the post-GFC  downturn. So what makes the collective confident that they can succeed – what’s the business plan?

Left: APY artists in 2017 outside Tarnanthi festival of Indigenous art at the Art Gallery of South Australia,  from left Nyurpaya Kaika, Tjungkaya Tapaya, and Tuppy Goodwin.

O’Meara says they “have run numbers” but while it looks promising, it is also untested. Backing from public and private sources has helped them take the plunge. The Australian Government is providing $246,000 from its Indigenous Entrepreneurs Fund, money that is being put towards the gallery fit out and vehicles to support the collective’s artistic projects in the Lands and to help transport their work to markets.

And the move is not all risk. Five minutes from the gallery – in Burton Street in inner-city Darlinghurst – is the National Art School, which has opened its arms to the collective. A partnership between the school and the collective will provide professional development opportunities for its students and alumni as well as for the APY artists.

One likely benefit from this partnership will be a boost for recruitment to art centre positions on the Lands.

Visibility for the collective at its city premises has also drawn support from unsuspected quarters. For instance, an arts organisation in the same street, Brand X, has lately provided office space for O’Meara and staff as they work to get the gallery off the ground.

“There are a lot of people who are passionate abut Indigenous art and artists as well as Indigenous-owned business but don’t know how to go about showing their support,” says O’Meara. “Having a home for the collective in Sydney is overcoming that tyranny of distance we experience as a remote business.

“We are putting our backs into this. We’ve been told it is unrealistic to expect much more government support, so it’s strategic to build our relationships with philanthropists and the corporate sector.”

Is she concerned about taking energy from the collective’s other goals, such as protecting artists from carpet-baggers when they are away from their communities?

No, says O’Meara. The collective made sure a sustainable program was in place for artists coming to Alice Springs before they turned to the gallery project: thanks to a cooperative arrangement with Tangentyere Artists “there has been no work by APY artists  produced for carpet-baggers this summer.”

Work is also underway in Adelaide to set up a studio there for visiting APY artists.

Meanwhile, it’s all hands to the pump in getting the opening show ready for March 23. Each of the art centres will show one of their emerging artists as well as their stars, and it wouldn’t be an APY show without some striking innovation. It will all be ushered in with inma (song and dance). Sydney will be wowed!

Below: Men of the Mitakiki family outside the Tjala art centre in Amata. 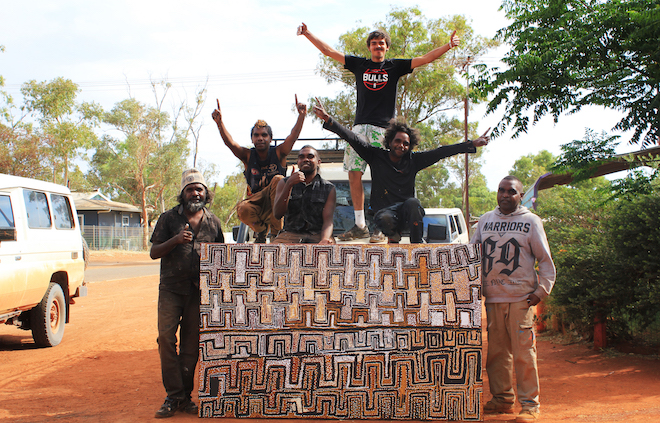