Aboriginal flag on Anzac Hill: the nays have it 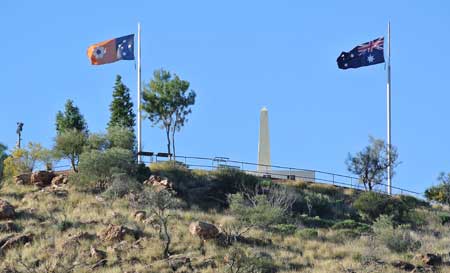 From the discussion it seems that such “ceremonial occasions” would be on days of particular importance to Aboriginal people. One might imagine these to include National Sorry Day and NAIDOC week.

Mayor Ryan, who largely drove the recent expansion of the war memorial on and around the hill (see below left), cannot see past its role in remembering members of the armed forces who have made the ultimate sacrifice.

He welcomes the Aboriginal flag flying outside the Civic Centre, which alongside the other flags flying there “clearly represents what council is working for, the whole community, and also it shows respect for the Aboriginal people.” But no word of recognition for Anzac Hill as a sacred site for Arrernte people passed his lips. This is despite him, at the start of every Ordinary Meeting of council, acknowledging  the Central Arrernte people as the traditional owners and custodians of the town. 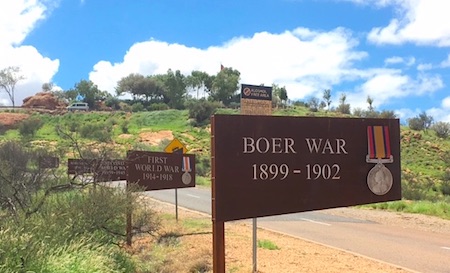 A stumbling block – or might it be called a pretext? – for those councillors opposed to flying the flag is the lack of response on the issue from Lhere Artepe, the native title holders organisation.

In contrast, with Cr Satour doing the groundwork, 16 traditional owners (a not insignificant number) turned up to a meeting with councillors last Thursday and all of them supported the idea of the Aboriginal flag flying on the hill.

Cr Satour had included Lhere Artepe in her invitation as well as approaching, more fruitfully, the IAD Senior Men and Senior Women’s groups and the Akeyulerre Healing Centre.

Not good enough for Crs Auricht, de Brenni and Price.

Cr Auricht needs the “legal” tick from Lhere Artepe and the Aboriginal Areas Protection Authority, even though AAPA has already said it does not have a view on the matter. Its offer to display a letter from council on the subject in its Alice Springs office, allowing interested custodians to see it and reply, has never been taken up.

Cr de Brenni preferred his personal consultations with local people, including unnamed “Eastern Arrernte and Western Arrernte people”, to reach the conclusion that the community “isn’t comfortable” with the flag proposal. 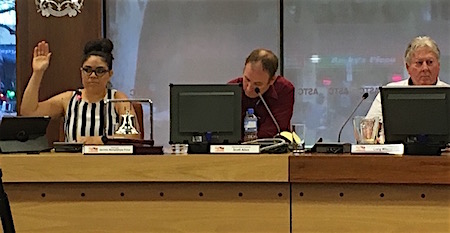 Cr Price, who was in the chair for this discussion, said she understood from senior man Peter Wallace that the hill is a women’s Dreaming site and she was concerned that not all the women who hold those Dreamings have been consulted.

Right: Cr Price, in the chair, showing her hand against the motion.

Further, the Aboriginal flag is a symbol for all Aboriginal peoples and other Aboriginal groups haven’t been consulted.

She also said the people attending last Thursday’s meeting are not elected representatives for other Aboriginal people (apparently some said they were speaking on behalf of others who could not attend).

She would like to see the Aboriginal flag flying 365 days a year in a prominent place in Alice Springs but not on Anzac Hill as it is “too divisive”.

Cr Paterson read aloud a letter from an Indigenous friend in the Army who says he serves under the Australian flag, not the Aboriginal flag, and who is also of the view that flying the Aboriginal flag on the hill would not contribute to overcoming the divisions in town.

Cr Paterson said the letter showed that not all Indigenous people support flying the flag on the hill, although “probably a majority do”. 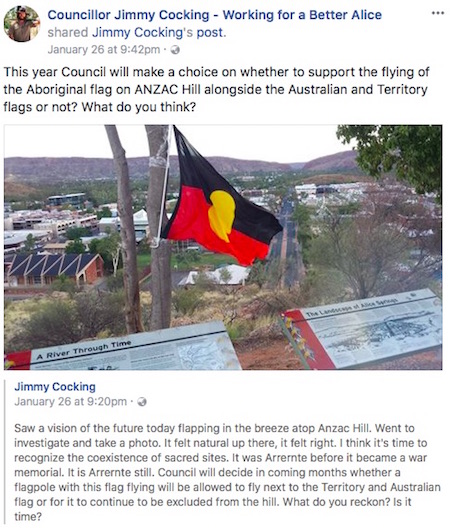 Cr Satour could see the writing on the wall, but nonetheless outlined with quiet gravity the case she sees for flying the flag: it would be not only in recognition of the site as sacred to the Arrernte; it would recognise the service of a lot of Aboriginal people who fought in Australia’s overseas conflicts even before they were recognised as citizens; it would also recognise the frontier wars, “incredibly under-discussed and a true part of our history”; and it would open doors to understanding and reconciliation in the community.

She also described it as “a vehicle to get onto bigger issues”. She said local traditional owners very much want to take leadership to address those bigger issues, including alcohol, youth crime and anti-social behaviour.

Cr Cocking, who had canvassed the views of people through social media (see post at left) and encountered only one opposing, couldn’t see how council could fail to acknowledge the hill as a sacred site and not take up the opportunity to engage with the Aboriginal community, including with their war history, when so many Aboriginal diggers were disrespected and treated unequally in the past.

Cr Melky saw flying the flag  as an opportunity for “good will”, a way of teaming up with the Indigenous community, getting closer to creating middle ground in the community between Aboriginal and other people: “We’re too far apart now.”

As the discussion went on, views became slightly more heated. Cr Cocking challenged council’s support for the national Indigenous art gallery / culture centre concepts when it can’t even put a flag on Anzac Hill. He suggested council was failing to offer leadership.

Cr de Brenni responded that no doubt “a massive Indigenous flag” will fly from atop the cultural centre, from where the whole town will see it.

Mayor Ryan resented that Cr Cocking, at last Thursday’s meeting, wouldn’t even mention other people (non-Aboriginal) who had fought in Australia’s wars.

Cr Satour challenged this: she said Cr Cocking was “incredibly respectful of all who had fought”, “our heroes” – as is she, as is everyone.

MLA Chansey Paech was in the gallery to watch this debate. Outside he described it as something of a “groundhog day”, referring to how the issue panned out during his time as councillor. He is confident though that one day, perhaps in the next council, this will change and council will embrace flying the Aboriginal flag on Anzac Hill.

The evolution of Cr Melky’s views on the issue lends support to this confidence: he said he had “struggled” when it came up in 2011-12, but he is of a “clear mind” now, it would be “a very good decision” for council to make.