Two boys aged abut 12 years were arrested a short while ago on a rural residential property after a chase by more than a dozen police including the dog squad.

It appears the arrest was linked with a car that had been driven onto airport land off Col Rose Drive and torched.

Only a burnt shell is left of the car, which is believed to have been stolen. The fire brigade also had to put out a grass fire. 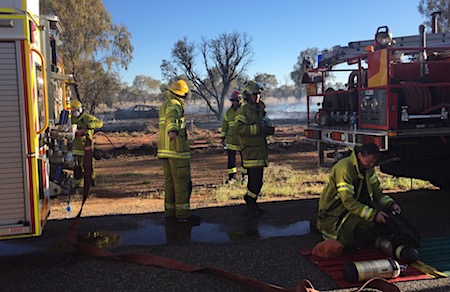 Meanwhile police responded to a vehicle rollover on Maryvale Road, about 10 kilometres outside Titjikala yesterday morning.

Police say they located eight youths with minor to moderate injuries which included a suspected broken collarbone. They are assisting with police enquiries.

The stolen motor vehicle had been taken from Alice Springs earlier in the day.

Police have charged two boys aged 14 and 12. They were bailed to appear in the Local Court on February 23 and 26, respectively.

Police say “an unknown offender” unlawfully entered a residence in Chewings Street and stole a sum of cash and the occupant’s car keys on Saturday around 11am.

The owner witnessed the offender drive off in the white Toyota Corolla and alerted police.

Police received a report of the stolen motor vehicle driving erratically on Norris Bell Avenue and engaged in a pursuit near Colonel Rose Drive.

The pursuit was terminated shortly after the stolen motor vehicle was driven across the road and through a fence into scrub land.

The offenders fled the area on foot and the car became engulfed in flames and the fire services attended.

Police arrested the two offenders, aged 12 and 14 years-old, soon after.

The boys have both been charged with unlawful use of a motor vehicle, dangerous driving during pursuit, driving unlicensed and arson.

They are both due to appear before the Alice Springs Local Court at a later date.