Fracking failure: Now you see it, now you don't

Lock the Gate is asking questions about the fracking inquiry, nearing its end, Origin Energy and the Territory Government, over a gas fracking well “deformation”.

The well is in the NT’s Beetaloo Basin, the prime test ground for the controversial mining method.

It is still not clear what its possible consequences are, but well casings have been repeatedly described during the inquiry as the crucial part which keeps toxic chemicals forced underground away from the water table vital to the region’s survival.

April 2017: Origin provides the NT Fracking Inquiry with a diagram that does not refer to the well casing problem (below).

25 May 2017: Origin writes back, referring to their February report to the department, showing well casing deformation.

December 2017: Judge Pepper releases the inquiry’s “draft final report” which contains the report omitting the well casing deformation, and which has the NT Government logo on the page showing a well diagram. 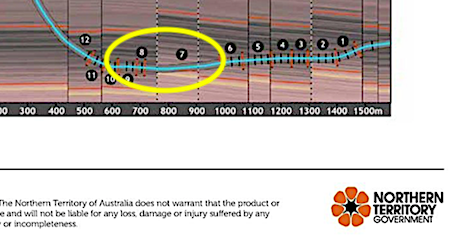 Says Ms Hogan: “Origin have mislead the inquiry with this cover up of a well casing deformation in their much celebrated Amungee frack well in the Beetaloo.

We have asked the government: What are the possible consequences of the deformation with respect to safety, ill health, pollution and contamination?

Has the government sought to mislead the inquiry?

We will report any replies received.

The Department of Primary Industry and Resources (DPIR) provided a statement that it has not mislead the fracking inquiry.

“The department was notified of the casing deformation in daily completion reports on 2/3 September 2016 following hydraulic fracturing stage number seven and in the Discovery evaluation report and well completion report which were shared with the inquiry panel by the company and by the Department.

“The Department has fully cooperated with the Inquiry.”