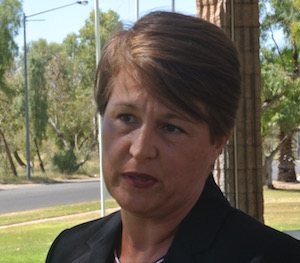 Sir – Fracking Inquiry Chair Justice Rachel Pepper [committed] an egregious misrepresentation of the economics of fracking in the Northern Territory.

Submissions are closing on the inquiry’s draft report, which was welcomed by the gas industry and criticised by communities.

The draft report ignores its own commissioned research, which says there is “very high probability” that lifting the fracking moratorium would see the industry “fail to commercialise”.

The inquiry’s commissioned research says there is “low to very low probability” of a major industry developing, but this is completely ignored in the draft report.

Despite these findings, Justice Pepper (pictured) claimed in a radio interview that fracking “had the capacity to create 32,000 jobs”.

Getting a figure wrong in an interview is understandable, but to be out by a factor of 60 on the best case scenario suggests the report commissioned by the inquiry had not been read, or the magnitude of possible gas industry employment was completely misunderstood.

The 32,000 figure didn’t come from nowhere. It’s right in the back of the consultant’s report and is an estimate of the extra “person years” of population a major fracking industry could bring. It has nothing to do with jobs.

It seems the Inquiry and its staff have misunderstood their own economics report, or are just blindly repeating the mis-information campaign on jobs by the gas industry.

Either way, more care needs to be taken around economic results in writing and communicating the Inquiry’s final report.