The eternal chase: songlines of the Seven Sisters 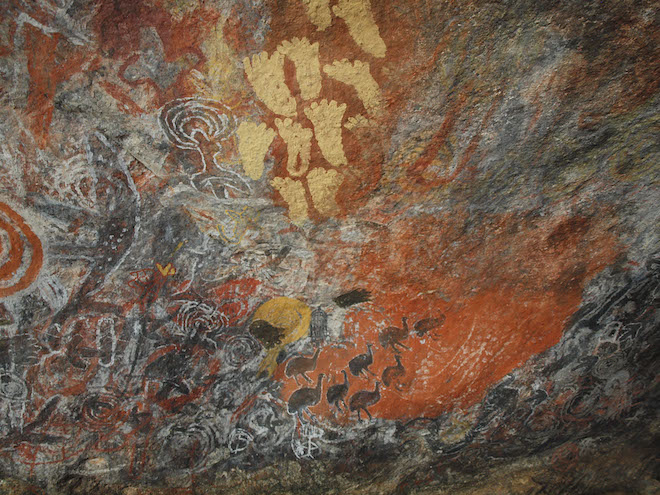 In this moment when, in the Western world at least, the tide is turning on what is permissible in men’s sexual approaches to women, it is fascinating to be taken into ancient scenarios in exactly these gender borderlands.

I am talking about the National Museum of Australia’s major exhibition, Songlines, Tracking the Seven Sisters, which brings together work from numerous Martu, Ngaanyatjarra, Pitjantjatjara and Yankunytjatjara artists and story-tellers from the desert lands.

The pursuit of the sisters by a powerful man is at the heart of the several versions of the  story that are presented, with varying emphases not only in incident but in the character of the interactions. These change, sometimes subtly, sometimes distinctly, not only with language group but with the story-teller.

Consistently though the man is in chase, and the sisters are in flight, finding strength and safety in staying together, looking after one another, attempting to retaliate. 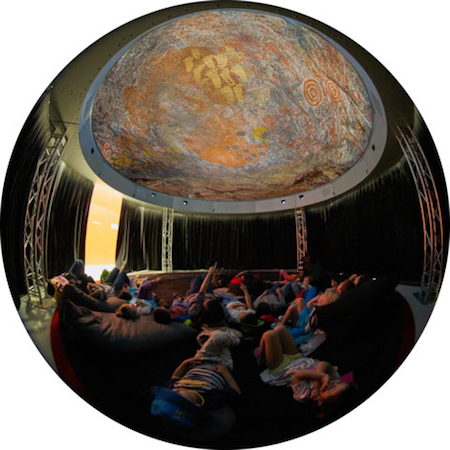 Male sexual desire is forefronted, so much so that the erect phallus is often treated as a separate entity from the man. It is troublesome, not only to the women, but to the man himself, Wati Nyiru in the APY Lands. In Stanley Douglas’ account, Wati Nyiru is aware that the unruliness of his arousal is getting in the way of a proper approach to the sisters, Kungkarangkalpa. His “longfella malpa” takes off without him, Douglas recounts.

Douglas is a senior custodian for Walinynga (Cave Hill, a rock art site in the APY lands) and in a short video tells the story with humour and relish for its lusty details. Video, used in a variety of ways, is a real strength in this exhibition, bringing people and country into the space, enlivening and deepening our understanding of the stories and the ways they are manifest in paintings, ceramics, punu (wood carving), tjanpi (woven grass sculpture).

In another video, we hear from Martu women at the Minyipura Parnngurr Rock Hole (Minyipura being the Martu name for the group of sisters). There is a greater sense of threat felt by the women in this account – the story-tellers are not laughing. They also describe how the sisters fought back, teasing, taunting and generally giving him, Yurla in their language, “a rough time”, including by urinating on his face, until he couldn’t see anything.

Then again, we hear in a video from Nyurpaya Kaika Burton, familiar to Alice art audiences as a frequent exhibitor at Desert Mob (for Tjala Arts and Tjanpi Desert Weavers) and an inimitable contributor to its symposium. Her story is tempered by her delight in being at her birthplace for the telling, the Seven Sisters site of Atila (Mount Connor). We hear about experiences of country, story, song in her long life, going back to babyhood.

It is perhaps clearest from Nyurpaya the way the story is used as a cautionary tale, instructing women and girls to stay on clear ground to protect themselves from the wily Wati Nyiru. In her telling the sisters, Kungkarangkalpa, like Wati Nyiru but not his friend, the long erect male member who walks alongside him. Again, male sexual desire is seen as troublesome, menacing in male-female relations. It manifests as a snake which threatens to penetrate the women and girls, coming up from the earth as they are sitting; they will be able to protect themselves, seeing it best on clear ground, they are taught. 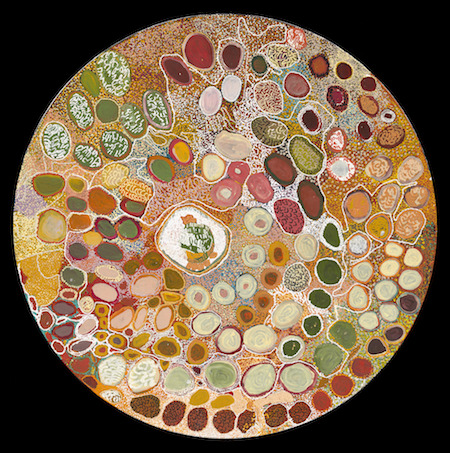 As all these videos are filmed on location at the sites of the stories, they help viewers understand, in a way that the more abstracted representations in paintings cannot, how the stories span vast stretches of country and come to be articulated in particular sites.

The most enthralling are the videos screened inside a six-metre wide dome. There are two: one animates a number of the artworks in the exhibition, their major story-telling elements drawn out as Shellie Morris narrates; the other takes the viewer inside Walinynga (Cave Hill), the most extensive Seven Sisters rock art site in existence, with its oldest layer of paintings dating back some 3,400 years.

A circular upholstered platform with head cushions allows viewers to lie down beneath the dome. Being in this prone position, unusual in a public space, invites surrender as you are transported deep into the desert and through time, as the sisters eternally seek shelter in the cave from Wati Nyiru, as they get tired and as others are born.

Wati Nyiru’s unfulfilled desire here turns deadly. He struggles to understand why his approaches to the sisters are so unsuccessful. The realisation that he is a sorcerer apparently disgusts him. Nonetheless, he works black magic on the oldest sister, who has been the most alert to his ruses. She dies as a result of his violent rape.

And so the story goes, the sisters and their pursuer forever captive of apparently irreconcilable positions, as reflected in the stars of the night sky where they came to rest, known in the West as the Pleiades and Orion.

The resonance between the Australian stories of these star clusters and the European ones is not explored in the exhibition, but it is acknowledged: “… even other people overseas know the Seven Sisters story in their own way,” Ngalangka Nola Taylor and Kampala Girgiba are quoted as saying. 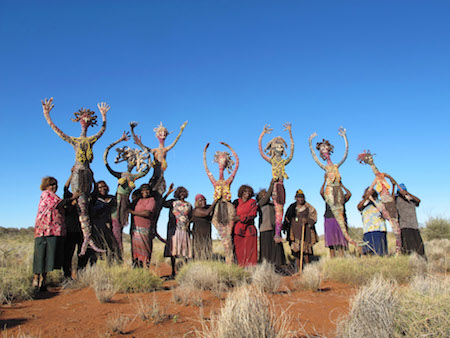 It is also noted that some of the contributing artists do not speak of seven sisters but rather of groups of sisters. For instance, Muuki Taylor represents a group of five in his 2004 painting, Jurta-rarra Pula Yaninypa, the Sisters Are Going to Another Place. The interpretive panel for this work suggests that the reference to seven sisters may result from the fusion of Jukurrpa stories with European ones for the Pleiades star cluster.

You could spend a month of Sundays in this exhibition and still not exhaust its offerings. These include exploration of the ways Jukurrpa stories guide not only mores between people but travels and hunting and gathering practices across the lands. Perhaps the most glorious example of this is the three metre by five metre collaborative painting Yarrkalpa (Hunting Ground), by eight women from Martumili Artists (see below).  Here the appearance of the sisters, Minyipura, and their pursuer Yurla is shown as a seasonal signal for burning practices, with the plant responses and hunting opportunities mapped for stretches of country in every direction around the community of Parnngurr, at the western end of one of two Seven Sisters songlines in Martu country.

Another strand of the exhibition reveals the story of the research and creative collaborations behind it, over long years of work by teams from the National Museum of Australia and the Australian National University with the Aboriginal people involved, who were led by a curatorium of senior Aboriginal women and men.

It sets the bar high for what could be achieved in the national Indigenous art gallery aspired to in Alice Springs, and demonstrates the depth of commitment and extent of resources involved. 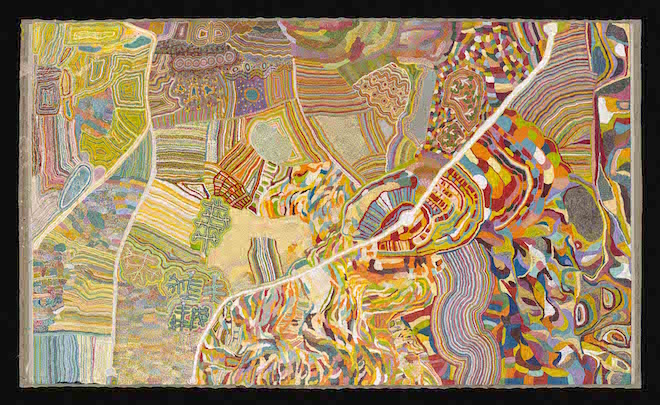 The exhibition is showing at the National Museum in Canberra until 25 February.

A touch of light: rockpools and desert frogs