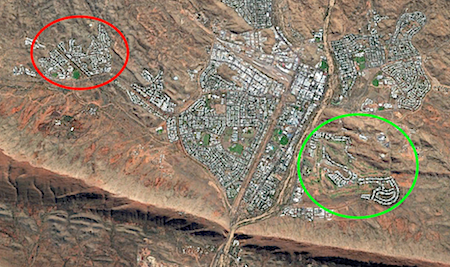 There were some significant fluctuations in median house prices in the December 2017 quarter, according to the report issued four times a year by Doug Fraser, Managing Director of LJ Hooker in Alice Springs.

Compared to the preceding quarter there was a whopping 28.7% drop in the price of Rural Area properties, reflected in nine sales, with the median price plummeting from $800,000 to $570,000.

Over the 98 house sales across town, described by Mr Fraser as a “significant increase” in the number of sales, there was a price increase of 1.37% with the median price now at at $480,000.

Mr Fraser attributes that “to the large number of the Stephens Road units, 16 in total, which were all at the lower end of the price scale”.

Mr Fraser says sales numbers went up 26% for houses and 47% for units.

“House sale numbers were evenly spread throughout the town with Gillen recording the highest number with 16 followed by Braitling/Stuart and Araluen with 15 sales each,” says Mr Fraser.

“Desert Springs/Mt Johns recorded the highest number of unit sales with 19 which is mainly due to the sale of a number of the refurbished Stephens Road one bedroom apartments.

Mr Fraser says there were a number of significant commercial and industrial sales: “Three adjoining blocks on Gap Road zoned “Tourist Commercial” totalling $4,510 sq. metres sold to the same purchaser for a total of $2,090,000.

“A first floor strata titled commercial unit in Gregory Terrace for $550,000 and a ground floor unit in the same complex for $1,078,000 to the same purchaser.”

• A substantial industrial property in Power Street for $1.5m.