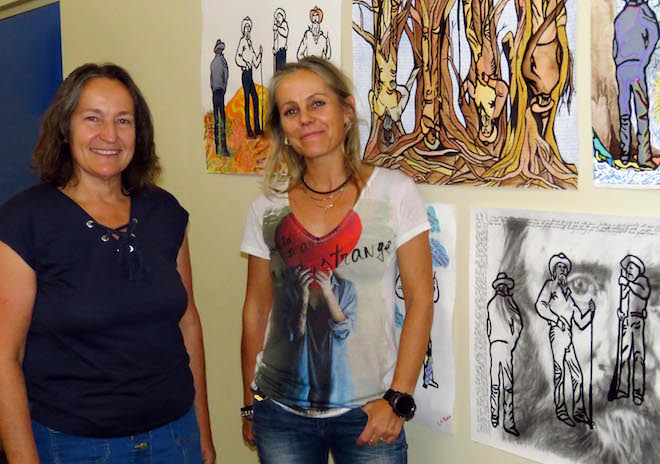 Senior research fellow and former creative arts therapist Dr Judy Lovell said a public arts engagement project that centred on a statue of the explorer had tapped into a vein of powerful emotion and resulted in the production of a collection of thought-provoking artworks.

“Participants have expressed hurt, anger and sadness among a broad range of visual responses that also was marked by humour, quirkiness and an appreciation of arid landscape,” Dr Lovell said.

“Some strong themes emerged, including those of cultural rifts and of a breakdown in communication. Despite the differences among the artists, and their pictures, one theme is the desire to reveal our differences; perhaps to recognise them, and perhaps to heal.”

Dr Lovell said that early this year more than 20 artists, writers, and educators from different cultural backgrounds were invited to respond artistically to the 4m high statue, which has been situated in a public park in Alice Springs for the past four years.

Each contributor was given a print containing an outline of the statue from four angles.

“The responses have been inspiring,” Dr Lovell said.

“From our intention to elicit a variety of responses from the public to a statue that is a significant and controversial piece of public art in Alice Springs, we are pleased that so many people reacted so creatively.”

The statue, made by Territory sculptor Mark Egan, has been the subject of controversy since it was gifted by the Freemasons to the town in 2010, marking the 150th anniversary of Stuart’s first journey into Central Australia.

Dr Lovell said the project was partly inspired by public engagement art initiatives in cities around the world.

“We were interested to see what that could look like in a remote setting like Alice Springs.”
Dr Lovell and Senior Lecturer in Education Dr Al Strangeways will present an analysis of their research to the Law, Literature and Humanities Association of Australia conference in Melbourne on Thursday.

“Our paper, Monumental in a small-town way”, explores different people’s responses to the statue, the man and the colonial era,” Dr Lovell said.

“This will be followed by an exhibition of the original works next year at a venue that is yet to be determined.”