Consultants with 40,000 years on the job 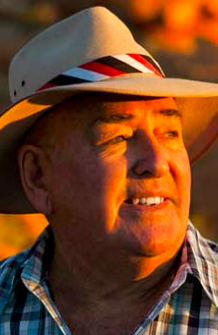 In his early twenties Ted Egan (at left) walked the length and breadth of Arnhem Land, east to west, north to south. It was this experience that exposed him to the intimate bush knowledge of many First Australian people.

In their presence, for all his youthful fitness and alertness, he looked inept: they could “read the country like a book in every situation,” he told the Rotary Cub of Alice Springs as a guest speaker last week.

Having come to the Territory in 1949, he worked in the Native Affairs Branch from 1951 to 1972, mostly in the Top End but also for five memorable years as superintendent at Yuendumu. 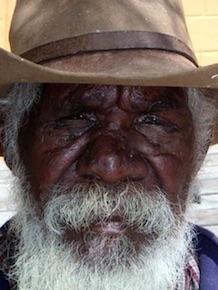 There he met Ted Jangala, who worked for him as a stockman and later – for conveneince in dealing with whitefeller paperwork – took the name of his boss, Ted Egan (right).

Both Ted Egans became figures of renown: one as a singer-songwriter, author and for eight years Administrator of the NT; the other as a legendary tracker.

Mr Egan experienced Tracker Egan’s skills first-hand: “While I was at Yuendumu, a car was stolen from Mt Doreen station, way out north-west.

“Teddy Egan showed me where the car had been parked, then we drove slowly in on the dirt road towards Alice Springs. He was aware of that track all the way.

“When we got to the Stuart Highway, he said ‘He entered the bitumen that way’, pointing north.

“He was there in the car, looking at both sides of the road. 150 miles up the track, he said ‘He just left the road there’.

“We went in, and there was the car. It was as easy as that, he had that track in mind.”

Later Tracker Egan was employed by the NT police and also did a lot of film work overseas. Mr Egan says he was put in a tracking competition against bushmen from the Kalahari and various other Africans.

“He just left them speechless, the things he could do and they couldn’t.”

In another film expedition, he was in the Black Forest of Germany. Two criminals had escaped, he tracked them very easily, caught them and they were arrested: “Again, he thought nothing of it.”

Since those early days, whenever Mr Egan has watched various tragedies in the NT unfold, he has thought, “If only there was a mindset where the instant that something happens off the bitumen – ‘Tracker!’”

The deaths of two elderly German tourists lost in the bush at Trephina last summer has prompted him now to call for a formalised system for using trackers.

Although Tracker Ted Egan was a man, Mr Egan says it is well known that tracking is a skill in which primarily women excel.

“I would trust my life to any 60 year old Aboriginal woman who doesn’t drink,” he says.

“A few blokes can track but women can really track. They can track ants!

“We used to have various old Yuendumu women stay with us – we live just out of town – and they would say, ‘Oh, you had a snake there last week’. I’d look and I’d say, ‘Oh yeah, I can see, but how do you know it was last week?’

“‘Oh, such and such happened, then three pidgeons walked across it’ and so on, like that.”

His suggestion is that the government or police recruit, say, 14 trackers from around the Territory and pay them an annual retainer to be on call at all times.

Then, whenever there’s an incident off the bitumen, a lost tourist, a crime, someone should say, “Tracker – this is a situation where an experienced tracker will be able to read what has hapened on the ground”.

The procedure must then be that nobody go there: police must cordon off the scene until the tracker arrives.

He recalled the tragic failed search back in October 1993 for a little boy lost in the bush near the Dunmarra roadhouse, which his parents ran. He had gone out riding on a child’s motorbike and wasn’t missed until evening.

When the word went out, 1200 people went to Dunmarra, on motorbikes, in utes, in aeroplanes. They conducted a grid search, walking through the bush: for all their good will, it was the “worst possible eventuality,” says Mr Egan. The searchers would have covered up all the signs on the ground.

If only someone had gone around Dunmarra Station and asked for a tracker. He has no wish to offend anyone, but Mr Egan says an experienced tracker would have found the lad in a matter of hours.

He says similarly the area near Barrow Creek where Peter Falconio disappeared was trampled by dozens of police before they called in Tracker Ted Egan 10 days later. Even so the legendary tracker was able to tell them that the assailant’s car had a soft tyre on one wheel.

So how should a team of trackers be recuited? Mr Egan says the job should be advertised, offering a significant annual retainer in return for being on call at all times.

The applicants should be able to demonstrate that they are not addicted to drugs or alcohol and pass an examination. This would take the form of reading a complicated incident scene, created for the purpose: lots of people, vehicles, going in every direction.

He acknowledges problems, with people’s commitments to sorry business for example. He says it simply has to be made clear from the start, they are on call like a doctor, not tomorrow morning and next week, but right now.

He says the propsect of a well-remunerated, respected job would encourage the younger generations to maintain the skills of their forebears.

“Meanwhile,” he says, “most of the old Aboriginal women around here have never tasted alcohol, don’t do drugs. They are just waiting to be asked to do the things they are good at.”

PHOTO of Ted Egan the tracker by ABC.