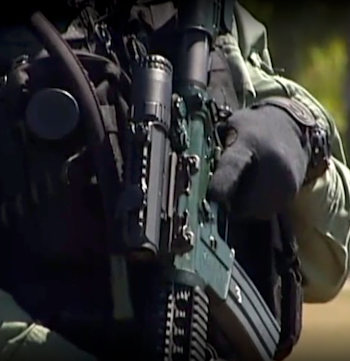 The images of the Territory Response Group (TRG) shown on last Friday’s ABC TV News, which was partly the subject of a comment in the Alice Springs News Online, were from file footage taken in 2011.

This has been confirmed by an ABC spokesperson today when asked by the News.

A police spokesperson says the footage, showing masked officers with military assault weapons, was not provided by the police in connection with an interview with Commissioner Reece Kershaw, speaking about preparations police were making for the expected disturbances caused by young people in summer.

The ABC reported that Commissioner Kershaw “has revealed plans to send a unit of camouflaged, specialised police with military-grade assault weapons to patrol Darwin and Alice Springs at night”.

Chief Minister Michael Gunner has since tweeted: “Police are active in Alice but I can guarantee there are no assault rifles or camouflaged police on patrol. The TRG are in town to support General Duties officers with specialised operational assistance re equipment for night time patrols. All straightforward stuff.”

“TRG are supporting General Duties officers and they are not doing it in camo or with assault rifles. They are doing it with specialised night time equipment.”

Commissioner Kershaw said during the launch in Darwin today of the Territory Intelligence and Coordination Centre, in a comment on the intiatives concerning children: “We are not talking about active shooters of counter-terrorism here.”

Asked by a journalist whether the assault weapons and camouflage gear would be used Commissioner Kershaw said: “If it is for an active shooter they will be, in a counter terrorism incident they would be. I can’t go into specifics on that front.

“What I can say is their particular task is around assessment and identifying criminal activity at night time.”