Aboriginal leaders will talk with the Town Council at its meeting open to the public this evening about an alliance fighting juvenile crime.

This follows the robbery of a tourist in the Mall and a violent clash between two youth gangs outside the Catholic Church yesterday.

Tonight’s meeting is likely to discuss reviving a long inactive Memorandum of Understanding between Aboriginal interests and the council. 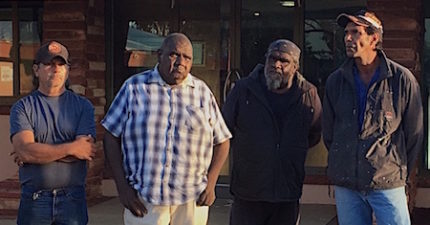 Mr Alice says he will be “playing more hard, starting at the grassroots” asking the parents why they are permitting their children “to run around late at night.

“This is Aranda country,” he says, with its own songs and stories, and children from other tribal groups “should go back to their grandfathers’ country”.

Mr Alice says tonight’s discussion will be about how the council could cooperate: “They are not supporting us” while the police are more keenly involved.

Mr Campbell says Lhere Artepe’s role is to provide support for a group of senior Arrenrnte men forming a partnership with the council, which could include the police and Tangentyere.

Asked why Lhere Artepe is not itself taking an official role Mr Campbell said the organisation is rebuilding and “not at full capacity as yet to take on that role. Other stuff going on from previous years” is still on top of the agenda.

As the government is plugging one hole another one is opening up.

The Wills Terrace side of Anzac Hill is now flanked by spotlights to discourage stone throwing.

Meanwhile what appears to have been two gangs were fighting a running battle outside the Catholic Church and the Youth Centre.

The centre is now surrounded by a tall fence with sharp spikes, accessible for young people only on Saturday evenings except if they belong to clubs hiring space at the premises. There is apparently some access to the open area rink.

Several young people we asked had no idea what the headquarters, a bit further up the road, of the Youth Outreach and Re-Engagement Team – YORET for short – is all about.

On two evenings we checked it was closed, and the sign (below) on the door – “better choices, brighter future” – probably isn’t a great deal of help. 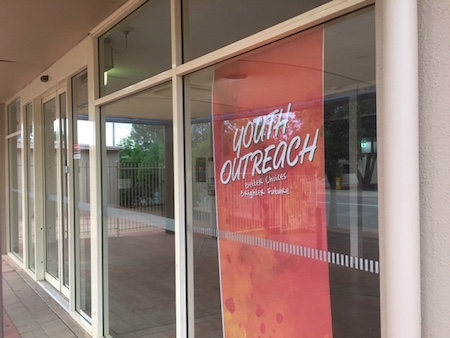 “At about 4:45pm on Sunday, police received a report of large group of youths fighting at a church in Alice Springs and disrupting the church service.

“In the course of the fight an unknown youth struck a 13-year-old youth to the head.

“No arrests have been made and police are still investigating this incident.”

PHOTOS (from top): Floodlit Anzac Hill • Mr Alice (second from left) with, from left: Matthew Palmer, Jonathan Conway and Shane Lindner • Police a the base of Anzac Hill after making an arrest.

Commander Michael White says police will use an intelligence-led approach to target anti-social behaviour and associated crime, as well as domestic violence and drink driving, “with a focus on engaging young people, proactive patrols of targeted ‘hot spot’ locations.

“But we are also encouraging people to get in touch with us and let us know what is going on,” he said. “If you report it, police will respond.”

School holiday programs are being coordinated “to maintain young people’s access to and involvement in safe and constructive activities that keep them engaged and ‘off the streets’, and to provide appropriate referrals and support to young people who are assessed as requiring more structured support”.