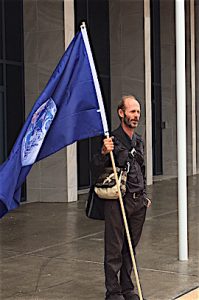 By KIERAN FINNANE
UPDATED (see below).

Peace Pilgrim Paul Christie has been found guilty of being unlawfully in a prohibited area, the so-called Joint Defence Facility Pine Gap. He was tried under Commonwealth legislation, the 1952 Defence Special Undertakings (DSU) Act.

The jury took little more than half an hour to reach their unanimous verdict.

Mr Christie asked Justice John Reeves to sentence him as soon as possible. He faces a maximum of seven years in gaol, although this punishment is likely reserved for more serious breaches of the law than his peaceful protest.

The court will hear submissions on sentencing from the Crown at 3pm.

Outside the court, Mr Christie said he had expected the guilty verdict – “of course” – and that this was a time to hold onto his integrity, courage and open heart – “that’s what I’m doing”.

The Crown has argued for a custodial sentence with real time served as the penalty for Paul Christie’s trespass on the “prohibited area” that is the military base at Pine Gap.

The maximum penalty of seven years’ imprisonment reflects how seriously the legislature views this offending, said Crown Prosecutor Michael McHugh in his sentencing submissions this afternoon.

Importantly a custodial sentence with real time served would  provide “general deterrence”: people thinking about similar actions should know that trespassing on this national security facility carries a harsh penalty; if they breach the law in this way they can be sentenced accordingly.

With respect, Mr Christie said in reply, I was carrying a rattle and some flowers and walking up and down in a river bed.

He said his intent was to carry out his action in the least egregious manner possible, showing respect to all involved: “There was no evidence that I was ever a threat to the protection of society.”

Justice John Reeves seemed inclined to agree with him on this point: his offending must be in the lower range of seriousness, he said,  and that is where his sentencing considerations would normally start. On the face of it, nothing about Mr Christie’s offending would attract a period of imprisonment.

Mr Christie’s previous trespass offence on a Commonwealth facility (with no conviction recorded and a modest fine imposed) pointed to the need for specific deterrence.

Justice Reeves asked Mr Christie why he shouldn’t send him to gaol.

The mild-mannered Mr Christie, who admitted to being nervous about the prospect, said such a sentence would be excessive in relation to the nature of his acts and his conduct in the court. However, if a custodial sentence were to be imposed, he asked for it to be suspended.

Justice Reeves reserved his decision. Sentencing will be sometime next week, likely after the conclusion of the trial of the remaining five Peace Pilgrims, which starts tomorrow.