Above: There is a large area of land available at the Desert Park, including the area cleared for the presentation of Parrtjima. Photo from our archive.

Two potential sites that best meet the requirements of a major national gallery have been identified by the steering committee for the National Indigenous Art Gallery, proposed for Alice Springs.

CEO of the Department of Tourism and Culture Alastair Shields told the Alice Springs News Online this afternoon that they are:

• the base of Anzac Hill; and
• Alice Springs Desert Park.

He said the selected site needs to take into consideration proximity, accessibility, size, landscape and cultural considerations. The steering committee, headed up by Hetti Perkins and Philip Watkins, investigated a number of sites around Alice Springs on this basis. 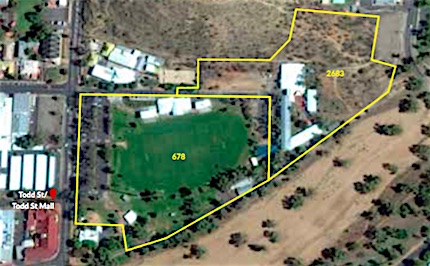 The “base of Anzac Hill” actually refers to the Anzac  Oval site (not the parkland on the Stuart Highway side as previously speculated) and the adjoining site, formerly the location of Anzac Hill High, currently of the St Joseph’s Flexible Learning Centre (see aerial view at left). This is made clear in a video outlining the proposals on the government feedback site.

The video says if this site is chosen, an alternative sporting ground with two ovals and a stadium will be constructed. It also says the historic Totem Theatre and sacred sites and trees in the area will be protected in any development.

Feedback is sought from the people of Central Australia on their preferred site out of the two that have been nominated. You can have your say here.

Chamber of Commerce CEO Kay Eade says for the sake of revitalising the CBD the option close to it is the better one.

“It would bring people into the town and they will spend money,” she says.

The Melanka site seems unsuitable because it is not big enough: “The project seems to include open space, a big area. It’s not just a building plonked somewhere.”

Mayor Damien Ryan says he “enthusiastically” supports the Anzac Hill proposal: Being close to the CBD “is a very good idea”.

Rugby – currently played on Anzac Oval – has been looking for a second pitch for a long time, and Blatherskite Park could accommodate two ovals.

Mayor Ryan says the gallery could be part of a re-development “right up through the mall” including the meeting place project the town council has been planning together with the Uniting Church for some time.

The Anzac Hill location could well stimulate private enterprise to build another motel, which the town needs, in collaboration with property owners in the Mall.