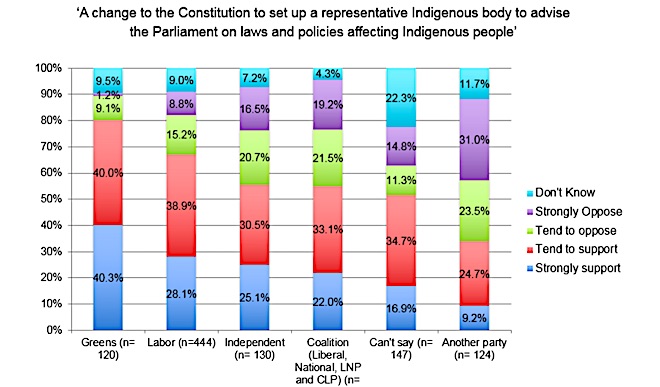 A national survey has found widespread support for Indigenous constitutional recognition, including the Voice to Parliament proposal.

This is contrary to views expressed by the Turnbull Government last week that the Voice to Parliament proposal was not “capable of winning acceptance in a referendum”.

The results were part of the most recent Australian Constitutional Values Survey, conducted in August by an Australian Research Council-funded team led by Griffith University, UNSW Sydney, University of Sydney and the Australian National University.

The survey was conducted online by OmniPoll among a representative sample of 1,526 adults, from all states and territories, age ranges, gender and political affiliations.

“Not only did general support for Indigenous constitutional recognition remain strong – specific support for the idea of a representative Indigenous advisory body (“Voice to Parliament”) was much stronger than expected, for such a relatively new proposal.”

“Based on this evidence, the idea that an Indigenous advisory body is incapable of winning acceptance at a referendum is simply unfounded.”

The survey asked respondents whether they supported a change to the Constitution to officially recognise the history and culture of Australia’s Indigenous peoples, and a number of specific options drawn from previous Expert Panel recommendations and the Uluru Statement from the Heart – including “a representative Indigenous body to advise Parliament on laws and policies affecting Indigenous people” (the Voice to Parliament).

Among the survey’s key findings:
A total of 71% of respondents generally supported recognition, 34% of those strongly;
61% supported the representative Voice to Parliament, 24% strongly; and
58% supported formal agreements between governments and Indigenous peoples, 19% strongly.

Professor John Parkinson of Griffith University, who is studying the Recognise campaign, said the results were stronger than many would have assumed.

“Importantly, there were more supporters in every state than there were opponents, an important factor when it comes to constitutional change in Australia. New South Wales and Victoria were the most supportive states. Only in Tasmania did support for a Voice to Parliament not have majority support.”

“Recognition also continues to enjoy support across the political spectrum, with a majority of Coalition voters (55%) also supporting the Voice to Parliament proposal.

“These results give clear reason to doubt assertions that the Uluru Statement is in any way unrealistic or unachievable,” Professor Parkinson said.