Clouds for Solar Challenge – but they have a silver lining 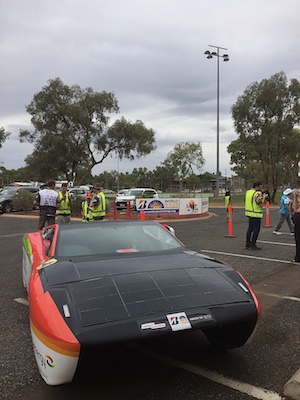 How much of a worry will clouds be if Alice goes solar?

This question in the accelerating local renewable energy debate is getting an answer from the 2017 Solar Challenge: Not a huge lot.

Dark clouds in The Centre isn’t slowing down the cars all that much: On Day Three the Netherland’s Nuon Solar Team is continuing its domination, travelling around 86km per hour.

The team has established a lead of around 40km and is now midway between Alice Springs and Kulgera, having covered 1608 kms since the start in Darwin.

The 44 cars compete in three classes: Challenger (in a single stage from Darwin to Adelaide), Cruiser (a regularity trial) and Adventure Class (a non-competitive class which provides opportunity for cars built for previous events).

Based on the original notion that a 1000W car would complete the journey in 50 hours, solar cars are allowed a nominal 5kW hours of stored energy, which is 10% of that theoretical figure.

All other energy must come from the sun or be recovered from the kinetic energy of the vehicle.