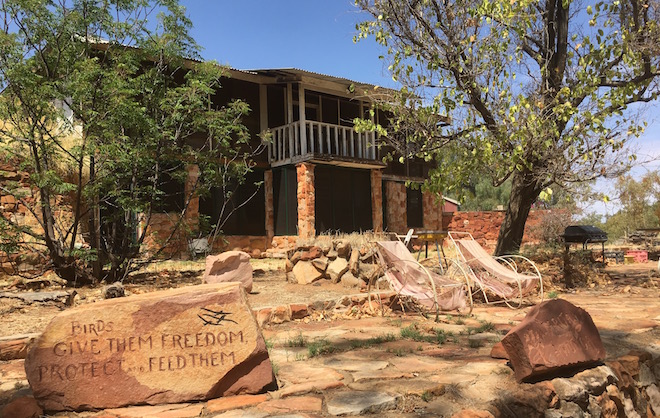 Above: Chapman House as it is today and a hand-crafted sign pointing to the original role of Pitchi Richi as a bird sanctuary, established by Leo Corbett in the 1950s.

A 12 acre sanctuary for birds just a stone’s throw from the Gap on the south side, with a fascinating sculpture garden and a heritage-listed dwelling: the sanctuary was the town’s first man-made tourist attraction, the dwelling, one of the town’s first double-storey buildings, and the whole complex is rich in stories of the region’s development and social relations.

We are talking about Pitchi Richi, mostly closed for decades now, but where plans to reopen are inching incrementally forward, under the steady guidance of the community group, Heritage Alice Springs (HAS). 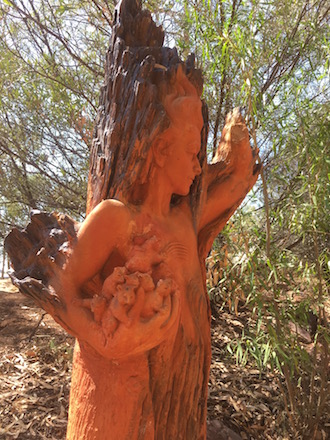 The group has resoundingly demonstrated their credentials by bringing The Residency on Parsons Street back to community life – an ongoing commitment, with strengthening support from government. A 25 hour / week coordinator’s position has now been funded, and a substantial regional museums grant will support its program of activities.

Left: “The Burnt Tree”, altered by the addition of iron oxide, colouring it red, emphasising the destruction rather than the emergent life.

Meanwhile, HAS has been quietly plugging away at Pitchi Richi, which was heritage listed in 2009. They have installed a caretaker; are working at bringing buffel grass under control; carrying out step by step renovations of the two-storey dwelling, Chapman House; creating and updating business plans and a master plan, and hosting high level visits – Michael Wells, director of the NT Department of Lands’ Heritage Branch, Lauren Moss, NT Minister for Tourism and Culture, Steven Schwer, general manager of Tourism Central Australia.

Critical to the future of the site and to preserving its heritage values is the conservation and protection of the surviving ceramic sculptures dotted around the grounds. These were created by the artist William Ricketts (1898-1993), who in the mid- 20th century was a frequent visitor to Central Australia, where he spent time with Pitjantjatjara, Arrernte and other Aboriginal peoples. The sculptures are beautifully realised if highly romantic expressions of his relationship with them and their culture.

Over the years the sculptures have suffered from theft, vandalism, censorship, and poor attempts at restoration. Now the Heritage Branch has commissioned locally-based conservator Isabelle Waters to assess the sculptures’ conservation requirements. HAS will then use this assessment to apply for funding to carry out the work. 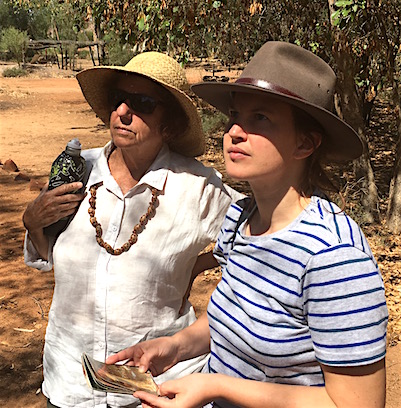 This is not purely a technical matter. Ms Waters says conservation needs to be based on an understanding of the sculptures in their time and place. Relaying this understanding to future visitors, through interpretive materials, would be a separate project but her conservation assessment needs to be grounded in the sculptures’ historical context and she is already deeply into informing herself on the works, their creator and the sanctuary itself.

The Australian Dictionary of Biography entry describes Victorian-born Ricketts as “a potter [though ceramist is surely a better word], and Aboriginal and ecological spiritualist”. After reading Spencer and Gillen’s 1927 book, The Arunta, Aboriginal people became his principal creative motif:

“His busts of Aboriginal men and women, together with animal figures, spoke of the unity of all life. His works preached the necessity of bridging cultures, salvation of the environment from rapaciousness, and a personal mysticism, based on a totemic view of life adopted from Aboriginal people.”

He spent time in communities including Ernabella, Haasts Bluff, Papunya and Hermannsburg and among his contacts were Nosepeg Tjupurrula and the late W. Rubuntja.

There are photographs of Nosepeg and Ricketts together with sculptures and of other (thus far) unidentified Aboriginal men men helping Ricketts install sculptures at Pitchi Richi. 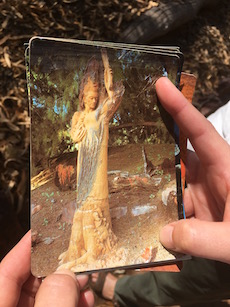 In Peter Brady’s biography of Ricketts, Whitefella Dreaming, Rubuntja is mentioned as “interpreter and guide” in Utopia region and there is a sculpture titled “Rubtuntja” in the William Ricketts Sanctuary in the Dandenongs (home to 90 Ricketts sculptures, many of them featuring Central Australian Aboriginal figures).

Albert Namatjira was also surely known to Ricketts, but never sat for him, according to Brady. Ms Waters, who worked for three and half years as manager of Hermamnsburg Potters, says the women there have told her that Namatjira camped and painted at the sanctuary. A monument to him that is not a Ricketts creation stands by the Pitchi Richi entry station, but the original painted image of Namatjira has disappeared. What to do about this will be one of the considerations of Ms Waters’ assessment.

There is quite a rich photographic record of the sanctuary and the Ricketts sculptures, including postcards of an earlier era, which will guide her assessment. They make clear the many instances of amateur restoration and some of alteration, such as the addition of iron oxide to the work titled “The Burnt Tree”, dramatically changing its colour.

This example is “quite extreme”, says Ms Waters, but poor restoration is fairly  common: “A lot of current conservation work is about fixing up past restorations.”
In another work, it seems likely that the genitals of a male figure in Ricketts’ own image (below right) have been covered over with cement. 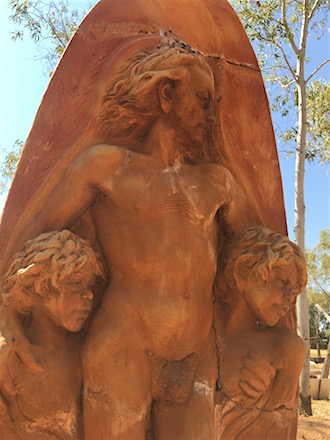 One of the most challenging pieces to assess has been extensively damaged, including by having the sculpted head of a figure entirely removed. Whether this was an instance of theft or of censorship (resulting perhaps from cultural sensitivity over the likeness), Ms Waters does not yet know. She says she is likely to recommend allowing the damage to tell its story, rather than recreating the missing elements.

Elsewhere, botched conservation efforts in joining pieces together or in providing supports, can be redone properly.

Old interpretive signs were painstakingly hand-written onto rock by Elsa Corbett, wife of the sanctuary’s founder, Leo Corbett. Many are now so faded as to be illegible. But there are records of them and Faye Alexander, who chairs HAS, says they deserve to be redone as part of future interpretive work:

“She put so much effort into them, there are hundreds of them!”

She says the sanctuary can tell the “whole history of tourism” in the Centre. Opening its gates in 1955, for many years it was a major tourist drawcard. With the present government’s new focus on museums, it may yet become so again.

Opening the property in stages is the way to go, with the sculpture garden being the obvious first stage. However, apart from conservation of the sculptures, some prosaic matters need attention: Chapman House needs to be fenced off, as in its present state it could present a risk to the public; the entry station, at the property’s boundary on Palm Circuit,  needs some work; and critically, a toilet block needs to be built. 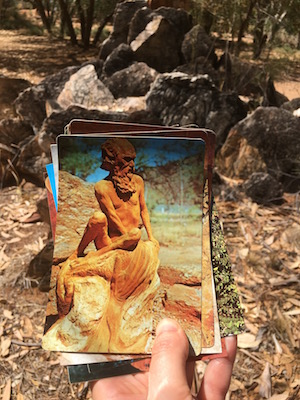 In the longer term, there are lots of ideas about how Chapman House could contribute to the attraction of the sanctuary: “It has so much potential, so much character – perhaps too much!” says Ms Alexander.

Left: This figure is missing altogether, originally positioned among the rocks behind.

The house was built in the late 1940s by Charles H. (Pop) Chapman, a wealthy miner who was a key figure in the development of The Granites goldmine and founder of the Centralian Advocate.

Some renovation work has already been done on the roof, with more to come; there’s been new wiring; there needs to be some structural reinforcement, and some internal rebuilding and repairs.

Once habitable, it could be used to host artists-in-residence, as a cafe, a museum, a base for volunteers. But, baby steps …