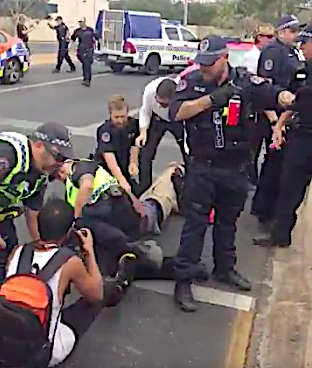 Protestors allege that an Alice Springs police officer kicked a young photographer to the ground during a demonstration in Alice Springs today described by organisers as a “peaceful march against deaths in custody”.

The Shut Youth Prisons group which staged the protest says: “It is believed that there have been six arrests including youth justice advocate Dylan Voller.”

The group released footage from a melee that erupted (see video).

The Alice Springs News Online is seeking comment from the police.

Police say they have apprehended eight people aged between 14 and 47 after they obstructed traffic on the Stuart Highway today.

“The obstruction of traffic was outside an arranged organised protest in Alice Springs and put motorists and pedestrians at risk.

“Enquiries are ongoing and it is expected that the offenders will be released today pending being served with infringement notices for obstructing traffic and disorderly conduct.

“Youths will be considered for diversion as appropriate.

“Police will review footage of the incident and take action as appropriate,” the release says.