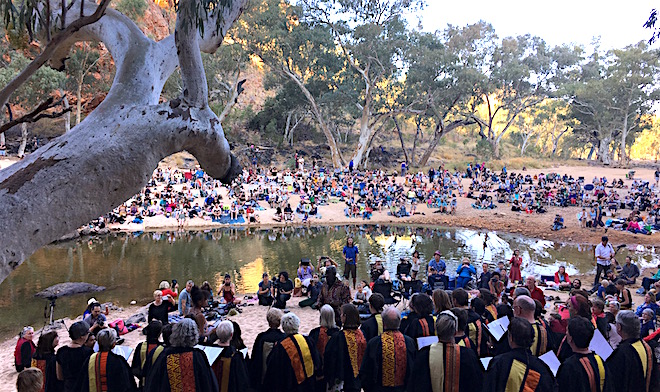 By KIERAN FINNANE and ERWIN CHLANDA

If the bones could talk, they’d say, “Bring me home.” The song was the moving finale of Desert Song’s a cappella concert in Ormiston Gorge on Sunday, but it was also a fitting expression of the whole event – of human longing for home, with all that word implies of shelter and connection with place and with one another, and the way we can, momentarily at least, experience this through the coming together of art and Nature. 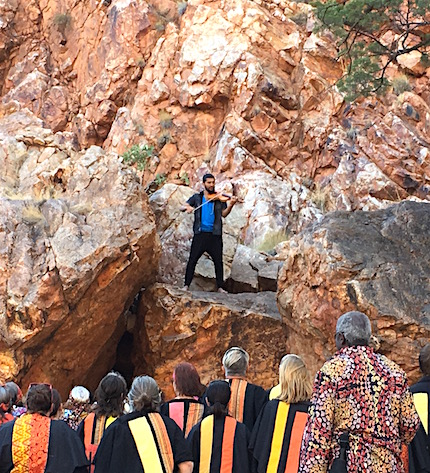 What better place could the assembled choirs have sung their songs of blessing, of the strength found through acting together for change, and for peace on this earth – freedom from war, should it need spelling out – and our deepest  desires to achieve these elusive goals.

At Ormiston, Nature expresses itself with dramatic beauty. In the gorge there is a sense of haven and nurturing welcome, with its long-lasting waters, generously spreading trees and enfolding rock faces. The river sands have disposed themselves to form a natural amphitheatre, a stage beneath the western rock face, sending the sound out across the water to the wide sandy auditorium.

As the choirs warmed up, maestro Morris Stuart told them to turn to the rock face, as if to pay their respects. Out from behind a large boulder, stepping onto another that seemed designed as a loft above the stage, facing the gathered crowd of some 500, came the troubadour figure of Q (Quetzal Guerrero, above) with his fiddle. The spell was cast.

Asante Sana, the choir formed in Alice Springs by Stuart each winter since 2006, sang “Let it go”, a poem by Michael Leunig set to music: “Let it go, let it out / let it all unravel / set it free and it can be / a path on which to travel.”

For the rest of this enchanted afternoon we were on this path. It took us around the world: to a Zulu wedding party, to South Africa and an anthem of the anti-apartheid movement, to the battle fields of Europe during World War One, the war supposed to end all wars – these stirring songs also came from the Asante Sana repertoire.

To the Gaelic lands, which are the ancestral home of many Australians, and to Greenham Common in England where women peace activists fought over almost two decades against the establishment of a base for nuclear weapons: these songs were offered by the Poco Tutti Choir (above), the headline guests of Desert Song this year. The choir is made up in part of people with a disability, an experience which may go towards their ability to transmit emotion, from the tenderness of a blessing that would soothe a baby to sleep, to the proud defiance  for the Greenham women, “I am a tower of strength”.

We also travelled in the land on which we gathered – Australia and The Centre in particular.

The flautist Marcus Kuchenbuch seemed to speak the very language of the birds, from his perch among the rocks.

A sweeter, more perfect rendering of “Waltzing Matilda” we will never hear: it came from the Australian Boys Choir (above), in The Centre for the first time in their 77-year history.  Their choirmaster, Noel Ancell, suggested that we might imagine the swagman’s billabong as much like the one where we were gathered.

The Central Australian Aboriginal Women’s Choir (below), whose profile Stuart has significantly lifted since taking them on tour to Germany in 2015, sang from the Christian tradition that they have made their own, in their languages (on this occasion, Western Aranda and Pitjantjatjara). The choir has its roots in the various community choirs formed in mission days and the survival of these songs now makes for a musical and spiritual inheritance more than a century old. 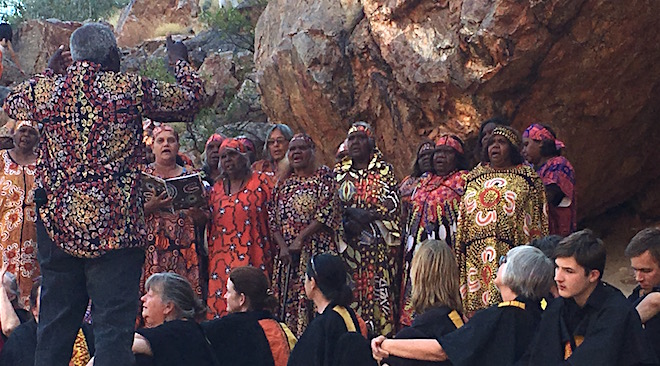 Then finally, after the departure of the boys choir in readiness for a recital that night, the remaining choirs came together for the unforgettable “Bring me home”. The song was composed by Rachel Hore, a songwriter and choir leader with whom Stuart has worked in the past. In it she imagines what the human bones that have been long held in museums might say if they could speak.

We heard it in English, in Western Aranda and Pitjantjatjara, in wave upon wave of melody and  feeling, voices weaving in and out, over and under one another, and from across the water on the final round the audience was invited to join in. For a moment, as the shadows lengthened and a cool breath could be felt on the air riffling through the gorge, it was possible to imagine that all the old injuries and injustices had been repaired and that peace truly reigned on this earth. 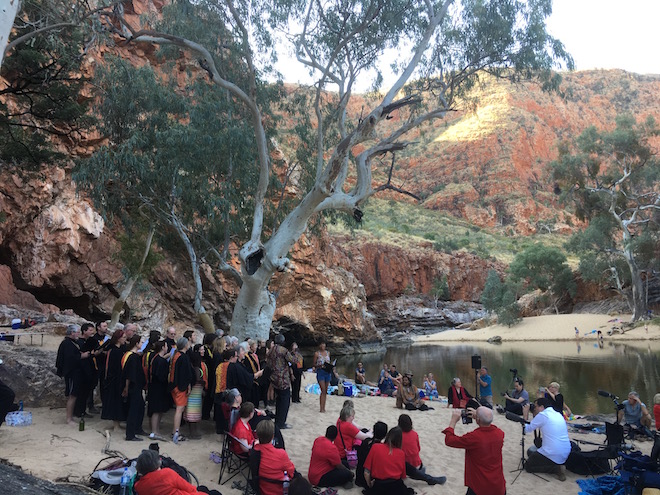