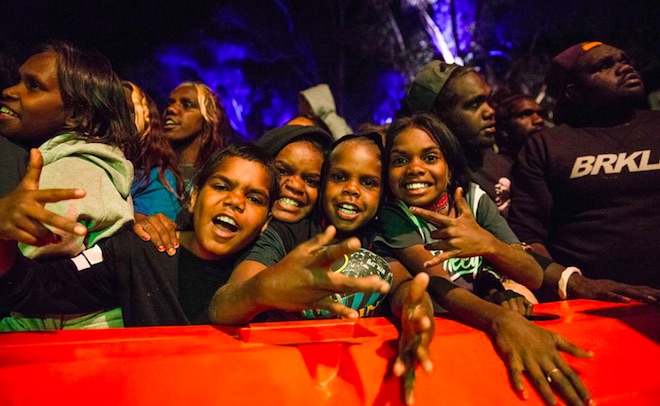 No doubt about them having fun! JEFF TAN PHOTOGRAPHY.

“Ay, Miss Honey, I saw you at the Bush Bands on Sunday!”

It’s one of the Year 6 boys from the school I teach at, catching me as the bell to go home rings.

“Yeah, but you couldn’t hear me up the front.” 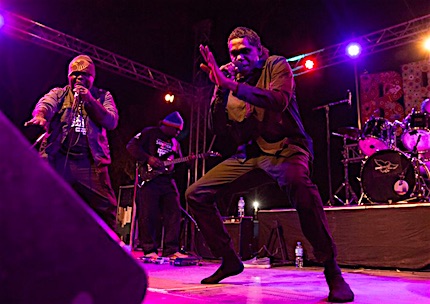 Haha! Too true! On Sunday night I was gleefully watching up close, saturated by the music of the concert.  Jesse and I smile at one another in a knowing way: knowing the true enjoyment that was had.

The annual Bush Bands Bash in Alice Springs was, in the best of ways, daggy and fun. That being said, the calibre of the music was very high – being the best of Indigenous music in Central Australia – and the professionalism of the event was impressive.

My beau, Deon, and I found ourselves on the shuttle bus from The Speedway to the venue at the Telegraph Station, having been asked to park away from the grounds. “Wow, this is pretty well thought out,” I thought to myself.

Once in I found myself gazing at the classic Alice Springs array of people. From my picnic blanket with my friends (and some other random hitch-hikers I picked up the day before from the Hugh River) I could see lots of local mob, other language group people visiting, Alice oldies, travellers, hipsters with a duration of a year or two in town and kids – kids galore! Different ages, nationalities and backgrounds, all intermingling on the dance floor.

After feasting on our packed cake and pomegranate juice, Deon and I made our way over to the organisers to see if he could speak to some of the bands backstage. Warm and inviting, they welcomed him behind the barriers. 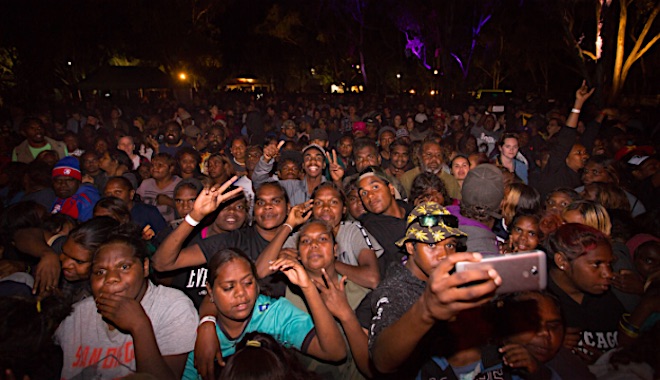 Up close and beautiful! OLIVER ECLIPSE.

Backstage, there was a balanced energy. Some bands finishing up their sets and others preparing to go on. It came to me in waves, a type of calm before the storm.

Waiting to speak with the bands, I looked around the park and allowed my mind to drift back. These grounds once played witnessed to the start of something new and which eventually grew into the town we all live in – such a symbolic place for such an event. 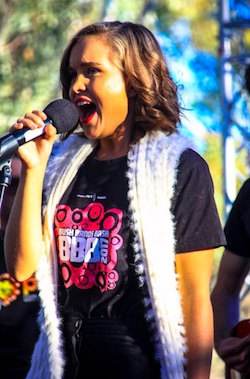 First up I sat down with Lonely Boys from Ngukurr, South East Arnhem Land. I was already star struck, knowing that they had recently been the opening performance for Queens of The Stone Age. They are now headlining the Sand Tracks Tour of six communities over three weeks.  But the boys were incredibly modest and genuine. They hilariously told me the story of their first gig, which was essentially just to a pack of camp dogs – so it had been humble beginnings for these fellas after all!

Then it was to Ritchie and John from Black Rock Band. Speaking both English and Kunwinjku I instantly felt drawn to their passion – in their eyes the fire burned bright. I learnt that the band had only been formed three years ago, but already it seemed that they had lived a lifetime of experiences together. We laughed over their memories of performing back home in Jabiru.

I was then lucky enough to meet up with Shana Ray, a 24 year old solo artist from Darwin, right after her performance. A very calm and measured young woman sat before me. It was made evident to me that she had been performing half her life, and when I asked, “What’s next?”, she told me producing her first album was on the top of her agenda.

All of these artists impressed upon me their drive for their music, but it was talking to Zedric from Wampana Band that helped me really grasp the essence emanating from all of them on stage.

Not only were these people passionate about their music, their country and their language (all very important aspects), they had a drive for a bigger picture. For Wampana Band it’s beyond just performing, it’s about learning how to manage bands and produce other musicians, thus creating opportunities for other members of their communities.

Bush Bands helped make this a further reality for these bands, running workshops at Ross River over the weekend – skilling people up to go out there and have sustainable, positive projects that are still in line with culture. In fact, one could say, that this was a harmonious meeting of traditional and modern Indigenous art.

I walked away saying to myself (and knew I would share these thoughts with Ronja later), “What a creative, humble group of people: all looking to better themselves, together. These are not individuals speaking about their passions, but instead people on the forefront of current Indigenous music looking to the future to support one another collectively.” 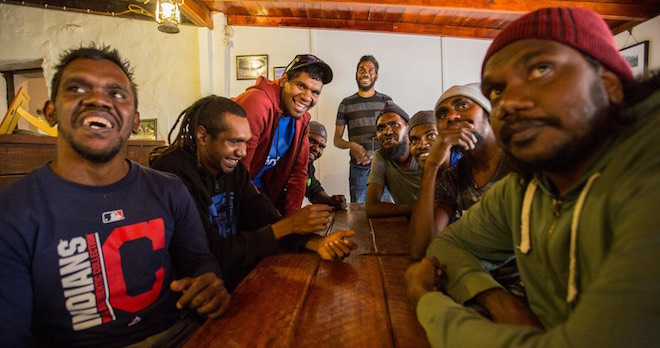