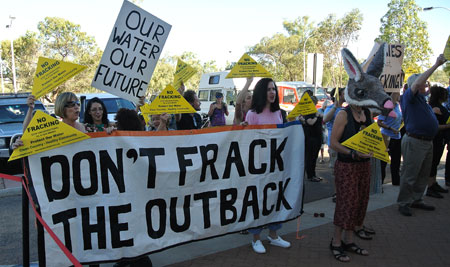 Sir – The Territory Frack-Free Alliance condemns the Country Liberals over its endorsement of a rehashed pro-fracking policy at its party conference over the weekend.

Despite claims the party has undergone a serious internal review and reflection of its disastrous defeat at the last election, it is clear CLP Leader Gary Higgins and the party still have a lot to learn if it hopes to reconnect with voters by rehashing the same unpopular fracking policy that cemented the party’s historic losses in key stronghold seats.

For the CLP to have any hope of regaining the support of Territorians, it must stop lecturing and start listening on energy and economic policy.

The seats of Katherine and Braitling, belonging to the former Chief and Deputy Chief Ministers, both went to candidates running on a clear fracking moratorium platform, with strong frack-free votes helping to carry candidates over the line.

With tried and failed policy ideas like this the Country Liberals are demonstrating just how out of touch the party  remains with its former voting base.

Prime Minister Malcolm Turnbull also used the conference to call for the NT Labor Government to abandon its fracking inquiry and moratorium and “pull the trigger” for onshore fracking gasfields.

At a Federal level it appears the Prime Minister is suffering a similar case of denial about the abject failure of Australia’s foray into onshore gas.

While Turnbull lectures Territorians about the benefits of fracking, we are acutely aware that this is the same Prime Minister presiding over an unprecedented crisis in the national gas market where Australia is producing more gas than ever before, yet prices have trebled in recent years, putting jobs and households under pressure.

This crisis is exacerbated by the Turnbull government’s refusal to effectively curb gas exports that are allowing companies to drive domestic prices sky high.

Shale gas produced in the NT would be some of the world’s most expensive, and would do nothing to bring down domestic prices.

If its fracking policy is anything to go by the CLP appear willing to throw our pastoral, tourism, farming and fishing industries under the bus to support the big polluters.

Hardly a new or winning electoral strategy, but one voters have shown they stand ready to reject.