Home Issue 7 Stories from the inside, by the insiders
Issue 7UncategorizedVolume 24

Above: A scene from Larry Doolan’s My Great-Grandfather’s Story.

“It’s a slap on the wrist, as good as a hotel, three square meals a day, lots of family members for company …”

This kind of throwaway comment about life in the Alice Springs gaol, often repeated, came severely under challenge from the lineup of short animated personal films made by prisoners, shown at the Alice Springs Cinemas as part of the Desert Festival program. 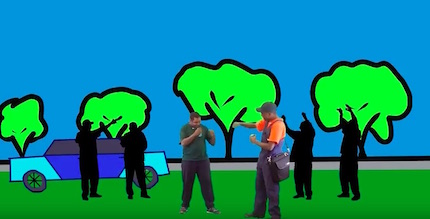 The films were produced as part of a media training program offered to inmates over 10 weeks, in a partnership between NT Correctional Services and italk studios.

Right: Fighting breaks out after drinking, a scene from One Young Fella From Bush by Cyrus Rose.

The first three weeks of the training is spent on learning computer skills; the next three on producing a “work story”, the kind of films that NTCS want to help orient prisoners to life behind bars (available in English and a number of Aboriginal languages). During the final four weeks inmates can then choose to tell their own story.

italk’s Christopher Brocklebank says the choice of subject matter is up to them: “We don’t guide them. They can be funny hunting stories, for example, but many people move into reflective mode and it can be quite a profound experience.”

In the selection of 40 shown at the cinemas there were indeed a few funny hunting stories, including some involving the much-feared Kadaitcha Man or the appearance of ghosts and stone-throwing “little people”. But many more were about regret over the events that had brought the inmate to this point and resolve to not repeat the same mistakes.

Although some non-Aboriginal inmates are involved in the program, all of the chosen films were by Aboriginal people who make up some 80% of the prison’s population. 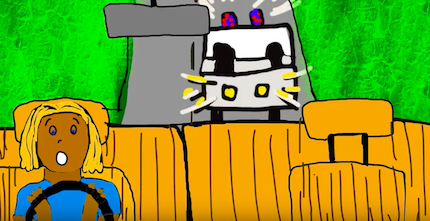 None of the film-makers liked being locked up. There was not one comment in the positive on any aspect of life in gaol. One inmate referred to seeing lots of people he knew there, but this gave him no comfort. His only thought was that he didn’t want to be like them.

Left: A woman gets caught for drink driving and speeding, a scene from A Story About Shirlene by Delvina Johnson.

The prison itself was evoked as a grey, lonely and monotonous place. As one film-maker put, “There’s more to life on the outside.”

Many among the 40 looked back with yearning on their childhoods or on their lives with family before landing in gaol. Going bush was a big feature of this, even for those living in town. They described bush trips made with family on the weekends – they’d go hunting, find bush tucker, cook for family around the fire, talking and laughing, and sleep under the stars.

This was the overwhelming image of freedom for which inmates longed, although some had other dreams: many expressed their intention to get a job and look after their family once they were free again, and some wanted to buy the things that potentially come from working for wages, such as a car, a house and travel.

Some looked back on personal achievements, like playing in the Alice Springs AFL grand final, learning to ride a horse, or a motorbike. It was interesting to see the Finke Desert Race feature in a couple of the films, including the aspiration to ride in it. 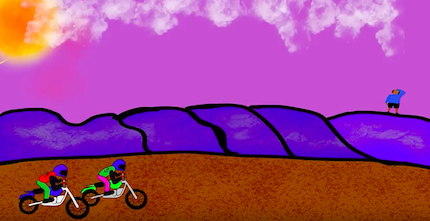 There was more than one story of a naive young man, lured into town and given their first taste of grog, which led onto fighting, arrest and gaol time. All it takes is “one wrong choice”. The pressure of older relatives was shown as contributing to this scenario, although a couple of other films had an older wiser man giving guidance about staying away from the grog.

Right: The joy of riding in the Finke, recalled in Race Day by Mike Wallace.

Women were also shown as being drawn into heavy drinking and its disastrous consequences.

Other film-makers seemed to have acquired wisdom on their own, during their time in gaol: a 27 year old man had been in and out of gaol since he was 15, and was determined to break the cycle; another was seeing clearly now the choice between a good and bad life. He saw time in prison as wasted unless you took advantage of learning from the programs on offer, to “be smart with your brain”, not your fists.

A couple of films struck tragic notes. One, called Living in two worlds, was about the toll on community life arising from old people becoming sick and having to move into town. Grog and kidney disease were the causes pinpointed by the film-maker. He observed many empty houses  in his community and with the absence of the old people, a declining knowledge of Dreaming stories and increased damage to sacred sites.

Another, My great-grandfather’s story, was about the impact of the Maralinga radioactive bomb blasts (left, from Larry Doolan’s film). This was the most developed film of the selection, with very effective artwork and animation. (Extra effort was put into its production, says Mr Brocklebank.) It had a scarifying story to tell, including of men sickened by the aftermath of the blast being rounded up, chained by the neck, thrown into a deep hole (from which they escaped to eventually settle in Apatula/Finke).

Whether this account can be corroborated by other records, or whether it may be a conflation of a number of distinct events,  it is relevant that this is the traumatic historical memory people are carrying within them and passing on.

All of the film-makers had given permission for these films to be shown at the cinemas; some of them can also be seen on the italk studios website. As a body of work they provide an interesting insight into the prison experience and the resolve of many inmates to change their lives. We can only hope that on the outside they will find the opportunities and support they will need to do this.

Below: Survivors of the Maralinga bomb blasts thrown into a deep hole, scene from Larry Doolan’s My great-grandfather’s story. 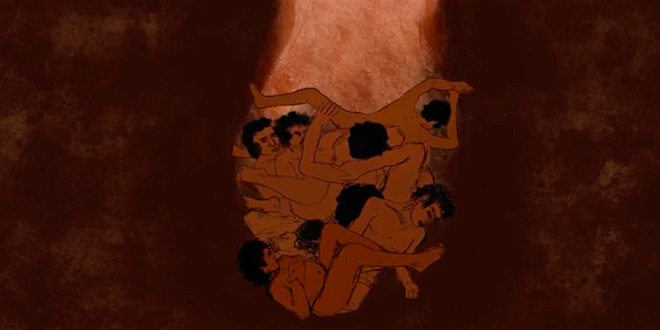 By OSCAR PERRI The Federals have moved into second spot on the ladder with a powerful win over West Alice Bloods under the lights at...
Read more
Issue 14

By OSCAR PERRI South Alice looked like a chance to bag their first win of the season early in their round five clash against the...
Read more