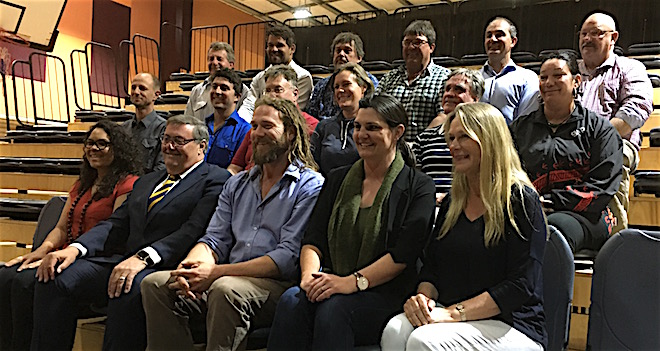 The gloves stayed on, no blows were landed. Only Mayor Damien Ryan tried, suggesting that some candidates may have had their corflutes printed outside of Alice, no names named, although it was clearly a dig at his rival, Jimmy Cocking.

The word ‘passionate’ was worn threadbare. Let’s take as a given that they are a passionate mob.

They were speaking at the only public forum assembling all candidates in the local government election. It was organised by Tourism Central Australia and the Chamber of Commerce.

This was not a debate, nor were there any questions taken from the small gathering of TCA and Chamber members as well as campaign supporters. All candidates had been supplied with notice of questions formulated by the TCA and the Chamber; all had equal opportunity to speak, in two minute slots, the first an open pitch, and later in response to questions.

Dale McIvor chaired and was determinedly neutral and respectful of all. However, she apparently did not recognise the unfair bias in requiring only the ‘environmentally-credentialed’ group to answer a question related to fracking.

This was the question: “Environmental sustainability is important for every business. However there are some industries such as gas extraction that can help business grow. If elected, how do you plan to balance your environmental credentials  with the need for economic growth?” 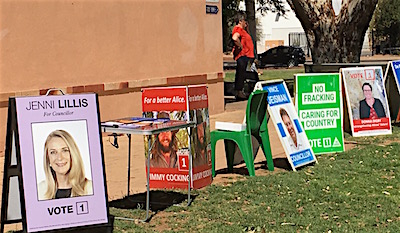 Every candidate in the room should have had to address this topic, one way or another. Those who support the extraction of unconventional gas, i.e. by fracking, should have been asked how they are planning to balance their ‘economic credentials’ with ‘the need for environmental sustainability’.

As it was, candidate Marli Banks, a small business-owner, answered by arguing that Alice Springs cannot afford to miss out on the opportunities of a cheap energy future offered by the sun in our zone – the most irradiated in the world. Clean green energy is what will grow the town, she said, in keeping with the move to renewables around the globe.

Jimmy Cocking, who heads up the Arid Lands Environment Centre (ALEC), challenged the  “old way of thinking” about economy as separate from environment. He referred to the risk to our water supply posed by an extraction method using chemicals under high pressure (fracking). The health of our water is not only fundamental to the town but also to the horticulture, agriculture and tourism industries.

He too argued for a focus on growing “the things we’ve got” (cheap energy produced by the sun, with the promise of better storage, and gas as a backup) rather than backing “an aspirational industry that’s trying to get a foothold in here”. What is needed is a long-term plan “to make sure we have got the economic capabilities to drive this and make sure we’ve got community support behind it as well”.

Jodi Lennox, the endorsed NT Greens candidate, challenged the assumptions behind the economic growth claims of gas extraction and its potential benefits for Alice Springs: royalties from all mining to the NT Government is a tiny fraction (2.9%) of what it earns from other sources; the gas industry is highly capital-intensive and does not create many jobs once the infrastructure is completed. She preferred investment in the type of growth that creates “jobs on the ground for our community”, and mentioned first steps to take to make Alice “a better place to do business”, such as revitalising the CBD, providing incentives to start-ups to use its many vacant spaces, and seriously investing in clean energy, creating “a whole industry” here.

Jason Quin wondered whether he had earned his “environmental credentials”, when his background is in enterprise development. This is what led to him being invited onto the ALEC  board in 2012, and he was “happy to report” that ALEC now has an environmental services venture, with a turnover of nearly $500,000.

On the question at hand, he wondered if anyone in the room “had opted for a mine site or gas field for their holidays or maybe bought a steak grown on polluted lands”. He preferred a focus on the economic potential of “organic beef from pristine country” and the lure for both visitors and future residents of “the beauty of wide open spaces in the cultural heart of the country”.

“Why risk short-terms gains, promised but far from assured, when the foundations for sustainable business are already in place?” he asked.

Above: Candidates on stage during the forum, Matt Paterson on his feet.

Incumbent councillors seeking re-election were given a more open question to answer about their plans for economic development.

He later also mentioned as his “single biggest thing” council support for events, such as the Red Centre Nats about to attract close to 700 competitors to Alice. And in introducing himself he had  spoken of developing the capacity of the council workforce to undertake infrastructure works themselves (such as bitumising roads).

Cr Eli Melky spoke of working on the council-run “businesses” of the library, town pool, and waste management facility (the latter currently helps subsidise the former), and their potential for returning a surplus and reducing council’s reliance on government grants and the ratepayer.

His “single biggest thing” would be work on delivering the four budgets of council’s next term, including limiting the risk of rate rises.

Cr Jacinta Price wanted to pursue council’s collaboration with the Uniting Church on developing the Meeting Place project. She suggested they should look to attracting private investment from companies such as Tellus (which hopes to operate a salt-mine near Titjikala, south of Alice).

Her “single biggest thing” was for council to do more in the arts, including work towards the provision of an amphitheatre; the arts are what draw tourists to Alice “on a grand scale”.

Mayor Damien Ryan’s emphasis was on making the most of opportunities being offered by NT Government investment: revitalisation of the CBD, for which they’ve promised $20m (and council has set aside $2.5m), and the national Indigenous art gallery ($50m promised), which “we must ensure is built within the CBD”.

He reiterated this focus as his “single biggest thing”: the national Indigenous art gallery could do for Alice what MONA did for Tasmania, he said.

Comments on the intertwined issues of economic development and population growth from other candidates:-

Paull Alekna: Attract the Department of Defence to headquarter here; expand Alice Springs Airport to become an international hub; give the town some “pizzazz”. (He also quipped that there’s “something we all do as humans” that could help the population grow.)

Donna Lemon: Invest in each other, build the town’s social capital; provide creative opportunities for young people, especially Indigenous young people, and entry level positions across industry. Develop what she called “civics orientation” to promote better cross-cultural understanding and so overcome the “great divide” in the community.

John Adams: Recognise the economic role of Alice being a major service hub for the region and of the community services sector in keeping the economy ticking over in the hot months when other industry goes quiet.

Matt Paterson (a 26 -year-old electrician who offers himself as a youth representative on council, referring particular to the young people of his own generation who will be the next leaders of the town):  Offer pop-up opportunities in vacant shops to students and young people doing a gap year; make more of the Masters Games opportunity to take visitors to the attractions around town, natural and man-made, so that they could discover “why we live here and why we think you should move here”.

Murray Stewart: Create incentives for corporate Australia to set up business here by establishing Alice as a special economic zone.

Vince Jeisman: Work on getting visitors to stay one extra day and in keeping retirees in town; address the parking and pedestrian access issues in the CBD with a view to the projected growth in visitor numbers; look after “the visitor economy” from the communities around the region.

Joshua Burgoyne: “Everyone, every day can encourage positive growth in this community … it’s up to all of us.” Work with existing initiatives such as “the True Local”.

Jenni Lillis: Work to have a cleaner, safer town, promoting Alice as a preferred location to live, invest and visit.

Jimmy Cocking: Grow a regional Indigenous cultural event, the likes of the Garma and Burunga festivals.

A question about reducing red tape, such as permits, went nowhere as the candidates chosen to answer it (Joshua Burgoyne, Jenni Lillis, Vince Jeisman) did not think there was much red tape and commented on the town council’s good job in this regard.

None of them mentioned public spaces permits, but Jimmy Cocking did in a flyer to supplement his answers, distributed to people arriving at the forum by a campaign supporter. It included reference to the $50 permit fee applying to artists selling their paintings in the mall, with a $350 fine for doing it without a permit. If elected mayor, he would support a review of this.

“It is worth noting that many of these art-vendors are pensioners and their presence adds incredible value to our public spaces,” he says in the flyer.

As mayoral candidates, Damien Ryan and Jimmy Cocking got to wrap up the meeting. Essentially they both appealed to voters to look at their records: nine and half years at the helm of council for Mayor Ryan, during which he “never left  a stone unturned”; 10 years in town for Mr Cocking, who took up the directorship of ALEC soon after arriving and has served on a number of other boards, such as Alice Solar City, Desert Knowledge Australia and the Regional Economic Development Committee of which he’s the current deputy chair.

The missing element in what they had to say was anything incisive on why one was a better choice than the other, what might be the downside of staying with the incumbent as opposed to voting for change, and vice versa. However,  it is fair to say that Mr Cocking’s pitch was more forward-looking in his emphasis on the necessity for a long-term plan that looks to where Alice will be in 2050.

Ms McIvor closed with a request to all candidates to keep lobbying the NT Government to deliver the national Indigenous gallery for Alice Springs, and to combine what they are presently treating as two projects (an art gallery and a cultural centre) into one. Having two projects makes sense to no-one in the community, she said, and especially not to the Indigenous community.