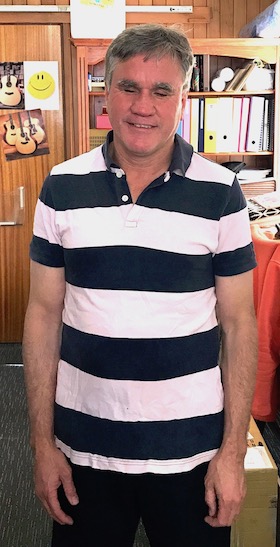 “The Todd River is our Harbour Bridge, our Opera House, but it’s been ignored for too long,” says Murray Stewart, who is standing for Councillor in next month’s election, after a five year break from local government.

The 54-year-old myotherapist says the river should be the venue for sports, entertainment and social functions and the present look-but-don’t-touch icon should become the heart of The Alice.

It should be the “powerhouse of a corporate innovation” in the town which he says has now reached “the bottom of its decline”.

The council, local commerce and the traditional owners should collaborate in the staging of events ranging from concerts to beach volleyball, running events and markets in the Todd.

“To achieve this we need to strip away red tape,” says Mr Stewart.

He fought a determined but unsuccessful campaign for Mayor in 2008 but was elected as an Alderman.

He says the town’s anti-social behaviour problems will fade into the background as the new CBD redevelopment attracts investment from outside.

Mr Stewart says he would push for that to be encouraged by rate and tax reliefs, and favourable prices for power and water provided by publicly-owned utilities.

He says he’s encountered many obstacles as the head of the Desert Sports Foundation which saw some of its initiatives hampered by bureaucratic delays.

Similar to Denver, Colorado, Alice Springs could become a centrally located transport hub: The local airport, in terms of its size, is one of the biggest in the world.

“Not all kids want to leave town. Many want to stay and we must give them opportunities for a great life here.

“I also look forward to continuing my work with the seniors committee. There are subsidies for electricity but not for bottled gas which many used for heating, which is not needed in the Top End.”

Mr Stewart says during his term on the council he initiated the employment of a grants officer to attract government and other funding for a string of projects, starting with an $800,000 glass crushing machine.

PHOTO: Mr Stewart, who was born blind. “It makes me see with my brain a little brighter,” he says.