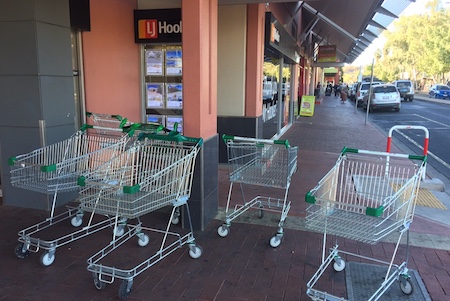 Abandoned Woolworth shopping trolleys are causing chaos at one of the town’s busiest intersections.

Their brakes set to lock on the footpaths outside the Yeperenye shopping centre where – unsurprisingly – lots of shoppers leave them behind.

They block access to businesses including the L J Hooker real estate agency, fire escape doors and pedestrian traffic, with people likely to step on the road and find themselves at risk of getting run over.

The way the brakes are set prevents the trolleys from being taken across the road to the Hartley Street carpark, for example, except in a straight line across Hartley Street from the main entrance, where they would be less of a nuisance and risk.

Abandoned trolleys can also be seen along Gregory Terrace.

L J Hooker managing director Doug Fraser says he’s been trying in vain for three months to get the town council to fix the problem.

Woolworth meanwhile is blaming the shoppers: “Most customers do the right thing and not take trolleys from the supermarket environments,” says a spokeswoman. 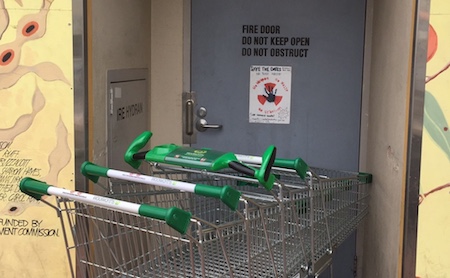 We have asked her who controls the mechanism that allows the trolleys to go beyond the shopping centre complex, but not past the footpaths; and would that mechanism be changed so that the trolleys cannot be moved outside the centre itself, including the carpark, of course.

We’ve had no reply so far.

Meanwhile the town council’s Kevin Everett, Manager Rangers, says: “We have been monitoring the area outside Mr Fraser’s shop since he brought this matter to our attention on June 15.

‘We will be meeting with Yeperenye Centre and Woolworths regarding how they might better manage their trolleys. I would suggest that the simplest solution is collecting trolleys from this area more regularly.

“Under our by-laws, individuals and businesses have responsibility to ensure that their property isn’t causing an obstruction that impedes the use of a public place.”