Hundreds of women, men and children, Aboriginal and others, responded to the call to march with the Tangentyere Women’s Family Safety Group calling for an end to violence against women.

“Stop the violence!” was the chant. “Stand with us women.”

They marched from the Town Council lawns down Todd Mall to the courthouse lawns, many carrying flowers of the kind you see on graves or at roadside memorials, in commemoration, as MC Catherine Liddle said, “of anyone who has ever been impacted by domestic violence or feels overwhelmed by the need to protect other people from domestic violence.” 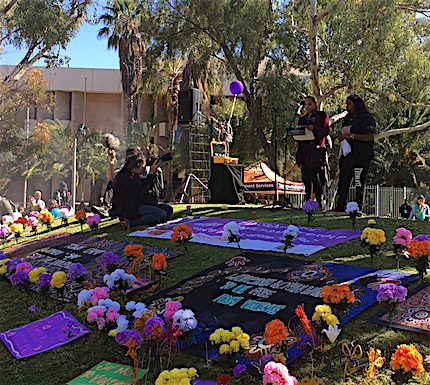 The marchers included prominent figures such as national domestic violence campaigner Rosie Batty, Police Commissioner Reece Kershaw, NT Senator Malarndirri McCarthy, Territory Families Minister Dale Wakefield, and visitors from around Australia, but it was the young women from Alice Springs town camps who put their stamp on the occasion.

Teenagers Connie and Rhiannon (at left, on the microphone) proclaimed their rights to live free of violence, to have non-violent relationships, a safe home and community, to be able to say ‘No’, to be free of sexual violence and to have safe sex, to be respected as women, to have a voice, make their own choices, follow their own dreams, hold their own cultural beliefs.

Shirleen Campbell, who seems scarcely much older but is in fact a 36-year-old mother and coordinator of the Tangentyere Women’s Family Safety Group, spoke of the frustration that Aboriginal women feel with their invisibility as people behind the shocking statistics. 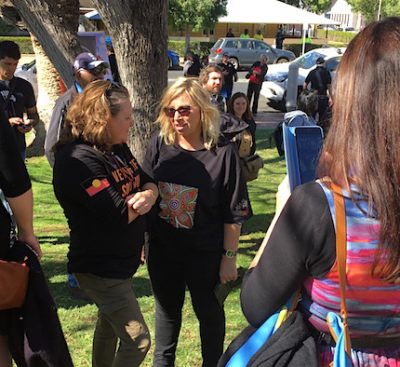 “Why don’t we hear about this?” asked Ms Clarke.

“It’s not alright that the stunning, beautiful Northern Territory is known as the hot bed of family violence, we are so much more than that.”

“We are not just numbers,” Ms Campbell  said, “we are people, walking breathing humans. We want to show the country, the world we are standing up against family and domestic violence.

“It’s not about breaking up families, it’s to make them strong, healthy and happy.”

This statement earned applause and cheers.

Afterwards Ms Campbell told the Alice Springs News Online that she had found her voice on these issues when she lost two of her aunties: “That’s what gave me the courage to stand up and speak about family and domestic violence.

“And not only that, I’ve got nieces and one daughter to look after and I want to teach them to be strong just like me and have a voice and speak up.” 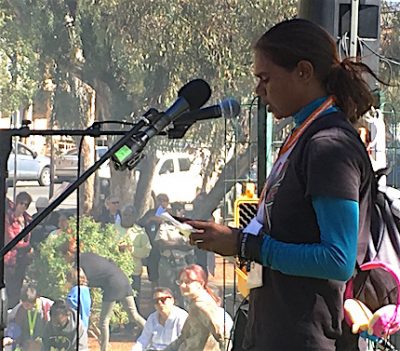 She described the Tangentyere Women’s Family Safety Group as “like the blanket on top” of a men’s behavioural change program and prevention program for youth.

It’s about taking “baby steps, not big steps,” she said, and from the ground up. She wants Canberra to put more money into grassroots services like hers, not services based on “reading from books”, because “we are the people of our land … we know which way our mens can go and what to do, and with our youths we can understand where they’re coming from”.

“Aboriginal women are and will be front and centre of change,” Ms Clarke told the crowd.

“When we start to listen to our Aboriginal voices we will finally start addressing the devastation that is family violence,” she said.

She thanked the Tangentyere Women’s Family Safety Group for organising what she saw as “a game-changing event” and also acknowledged “the men and brothers who have walked with us today.”

Before the march began the crowd heard from June Oscar AO, a Bunuba woman from the Central Kimberley and the first Aboriginal woman to be appointed as the Aboriginal and Torres Strait Islander Social Justice Commissioner at the Australian Human Rights Commission. 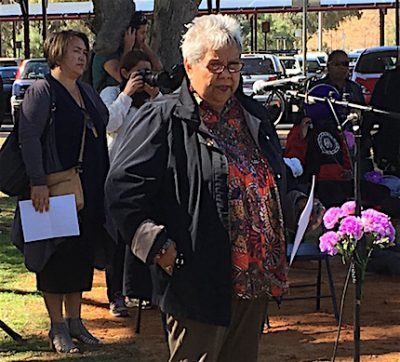 Her speech was read by Jackie Huggins AM (left) from the National Congress of Australia’s First Peoples.

“I know all too well the damage and havoc that violence wreaks on our lives as Aboriginal women,” said Ms Oscar.

“I have lived this chaos in the Fitzroy Valley where alcohol fuelled much of the violence within our community.”

However today, after years of community-led grassroots work and tackling alcohol issues head on, Ms Oscar was able to report “overall a greater sense of peace and order in our communities now”.

“Most people, men as well as women now accept that control of the grog is essential if we are to build a better future for our children.”

She hailed the young women from Tangentyere as “examples fighting against the picture of deficits that so often seek to define our communities.

“I know that all of the hardships in communities seem to be never ending in a cycle of trauma and grief which is unbearable. Sometimes the mountain in front of us seems too hard, too steep to climb …

“I know that despite everything you continue to climb because you can see what it is on the other side for us, you can see a future for our peoples that is free of violence.”