Q&A: Instead of Nigel we'll get Bob 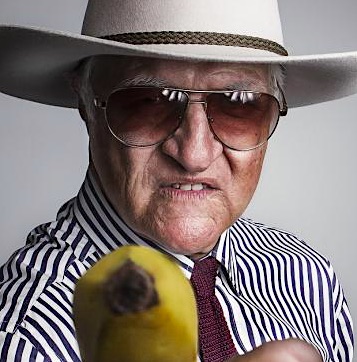 Where is Nigel when you need him?

Territory CLP Senator Nigel Scullion will not be on tonight’s Q&A panel and will be replaced by Queensland independent Bob Katter (at right) whom the program’s moderator, Virginia Trioli, describes as a maverick.

Mr Katter’s link to Alice Springs is no more than that his electorate of Kennedy adjoins the NT but then stretches all the way to Innisfail in Queensland.

Half the panel is Aboriginal and perhaps that is a recognition of the town’s much decried “Aboriginal problem”. But while the three Indigenous members will have important insights to share from their own personal and professional perspectives, that “problem” needs a whole of community response.

Yet Dale McIver, as the chairperson of Tourism Central Australia, is the only representative of the town’s active commerce. Why are there no representatives of employers, educators, law enforcers, environmentalists, planners on the panel?

And then there is Warren Snowdon, the Member for Lingiari, and a former employee of the Aboriginal Central Land Council (CLC). He is currently the Shadow Assistant Minister for Indigenous Health, an inexplicably long-serving politician with a string of minor jobs in Canberra over decades and noted in is home patch for his lack of initiative and creative policy development.

Senator Scullion would of course have been the obvious foil for Mr Snowdon – one Federal politician versus another, and from opposite parties.

That the good Senator wasn’t going to play ball became obvious when Ms Trioli closed last week’s show with these words: “Unfortunately, no relevant senior government Minister could join us in Alice Springs (side glance at Christopher Pyne, a panel member last week).

“Maverick Independent Bob Katter, who supports the Government in the House of Representatives, has agreed to join us there.”

Senator Scullion this morning would not disclose the reason for his absence.

What has become clear is that his preferred contact with the public is a barrage of media releases including on the most insignificant issues.

Sample: Friday, 30 June 2017 – A new change room will be built and additional lighting installed to increase safety levels at Boggabilla Oval, thanks to a $236,000 grant from the Coalition Government.

Sample: Email on May 29 from the Alice Springs News Online to Senator Scullion’s Senior Media Advisor: What is the value of assets owned by Centrecorp (in which the CLC is the biggest shareholder as well as an instrumentality answerable to Nigel)?

These assets, held by what is conveniently structured as a Pty Ltd company, which has little transparency, are believed to be in the hundreds of millions. Tangentyere and Congress are shareholders.

Reply from the adviser: “Thanks for your enquiry. I will come back to you.”

Other members of the panel are:

William Tilmouth, former Tangentyere boss and now on the board of the $40m a year Central Australian Aboriginal Congress.

Town councillor Jacinta Price, who appears to be settling into the mantle of national spokesperson on issues of Indigenous domestic violence inherited from her mother, Bess Price, who faded from politics in the NT Labor landslide last August.