Home Issue 5 'Child One' behind bars: Who could, should have helped?
Issue 5Volume 24

'Child One' behind bars: Who could, should have helped?

Our report about a 13-year-old boy accused of property damage – we called him Child One – who was remanded in custody by Judge Greg Borchers (pictured) sparked many reader comments, more than 50, that were in favour of the judge’s actions by a ratio of 10 to one.

Our previous reports appeared on Monday and on Wednesday. The issue quickly turned into a national controversy.

The majority of our readers, approving the judge’s actions, expressed utter dismay about the perceived impotence of authorities in their dealings with juvenile delinquents.

Many locals are feeling imprisoned in their own homes, fearful of going out at night in case their homes are broken into, or they themselves are assaulted. They complain about what they perceive as inadequacy of court sentences and orders, and suggest that in a situation of confinement the boy would receive the care and direction denied to him by his family and surroundings. 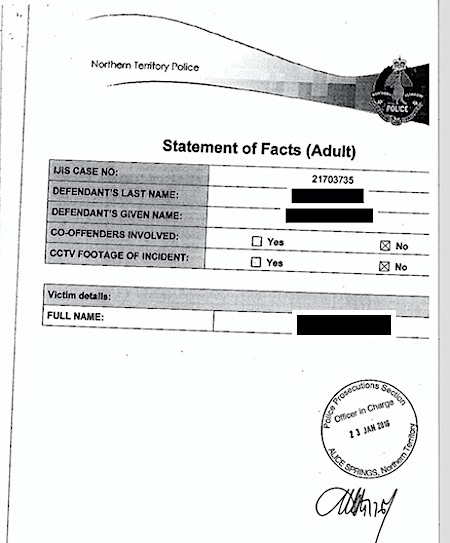 A minority expressed strong disapproval of what they consider the judge’s harsh treatment, especially in view the death of the accused boy’s mother in January, allegedly at the hands of his father who has been charged with murder.

We are publishing on a separate page a police “Statement of Facts” about this alleged murder to shed some light on the situation which Child One was in prior to his offending. We have redacted names to protect the identity of Child One. We advise that this document, presented in open court, includes highly distressing material.

The Central Australian Aboriginal Legal Aid Service (CAALAS), which provided Child One with a lawyer, whose conduct of the case  several readers describe as inadequate, is now calling for the NT Attorney-General to “consider assessing Judge Greg Borchers’ suitability to remain on Youth Court following his inappropriate comments to a traumatised 13-year-old offender”.

This aside, there are several pressing questions: Given the horrendous events in the boy’s home in January, why did his family and government instrumentalities not come to his help immediately?

The boy came before the court in March after what the judge described as “rampages” and received several orders to which the boy agreed, but did not comply with.

He is alleged to have offended again, and came before Judge Borchers again this month when the judge made his now controversial comments and declined bail.

There are – at least – the following authorities which could and possibly, should have acted but evidence of effective intervention is scant: The authorities are the police, the Department of Territory Families, probation officers of the Department of Justice, and CAALAS’s own Youth Justice Advocacy Program.

The Alice Springs News Online emailed the NT Department of Justice on Thursday: “The bottom line issue seems to be that no-one ensured that the boy followed the orders from the court, made when he was before it in March.

“I understand ensuring compliance would have been the responsibility of parole officers in the correctional services department. What did these officers do? What were they obliged to do but did not do?”

The department replied initially it would “look into this but responsibility may be with Territory Families which is responsible for children in custody”.

We contacted the Department of Territory Families but have not received a reply so far.

The Department of Justice replied further at 4:10pm yesterday: “The role of a Probation and Parole Officer is to supervise and monitor an offender’s compliance with the Court order he has agreed to abide by, and report back to the Court if he fails to comply.

“Correctional Services does not comment on individual cases involving youth.”