Self-funded retirees may get concessions back 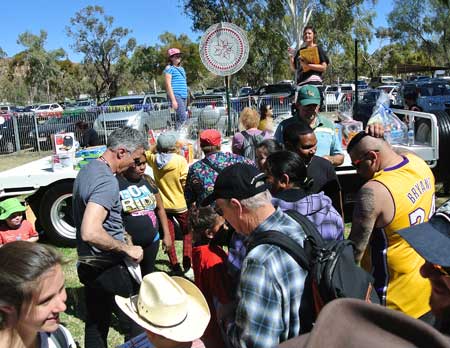 The NT Government wants to bring back under its concession scheme self-funded retirees over 65 who were excluded from it by the Giles Government in May 2014.

Right: Keeping seniors in the NT. Annual fundraiser at Old Timers, photo from our archives.

From that date financial subsidies such as for electricity, water, rates and motor vehicle registration and licensing, as well as a travel subsidy of $500 every two years, became restricted to pensioners and carers who qualified for Commonwealth pension and carer payments or cards.

The Gunner Government is now putting the proposed changes, including raising the $500 subsidy to $700 every two years and permitting it for uses other than travel, before the public for comment.

“The scheme in its current form has not been reviewed for a number of years and has become outdated, expensive, unsustainable and open to fraud and rorting,” says a government spokesperson.

“Some concessions were not capped, so members could claim thousands of dollars in concessions.

“These issues need to be addressed to ensure a robust, fit for purpose scheme that supports Senior Territorians to remain in the Territory after retirement.”

The proposed scheme will be two-tiered and will offer concessions for eligible pensioners and all seniors, says the spokesperson.

“The two tiers will be those on a government pension, and self-funded retirees 65 years of age or over. The details of eligibility may be a topic of discussion at public consultations.”

Similar to Centrelink’s Basics Card arrangements for some Aboriginal people, it is likely future NT Government concessions will be administered via debit card. It will be loaded with a single annual concession amount and can only be used for specified purchases with identified vendors.

“How this will work is still to be identified and finalised through the consultation process, however depending on the results of our consultations it may continue to it will include things like power and water, travel, and smaller items such as motor vehicle registration and spectacles,” says the spokesperson.

There will be a cap on concessions paid: “How and where these are used will be part of the public consultation. The Government has included an additional $2.1m extra to support senior Territorians previously excluded from the scheme under the CLP.”

The new scheme will commence on January 1, 2018. Hardship provisions for low income and very special needs such as unusual medical needs requiring high use of power, “if required,” will be incorporated into this review.

The Government will also have an independent review of the current scheme to better understand why some households are claiming very high concessions.

This review will be completed in June and will be used to inform ways to support a more moderate consumption of electricity as well as how to more fairly distribute the funding across all members.

The key findings will be made publicly available “and will inform the community consultation”.