Breathing new life into an Alice institution: The Show 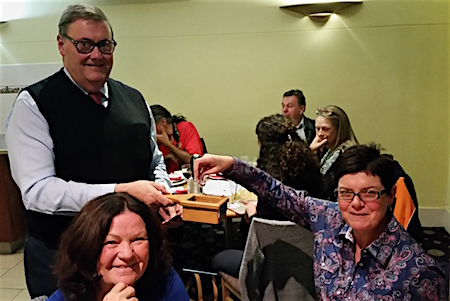 Six years ago Rosie Gibbins was just a volunteer manning the gate. Then the president resigned, his successor fell ill and suddenly she was next in line to head up one of the town’s oldest organisations, and the one indisputably attracting the biggest crowd: The Central Australian Show Society.

Left: Rosie Gibbons drawing a raffle at the Rotary Club of Alice Springs after speaking to the club about the 2017 Show. Pictured with Rotarians, Mayor Damien Ryan and former Mayor Fran Kilgariff.

On July 7, as always a special public holiday in Alice Springs, around 17,500 people will be thronging to Blatherskite Park again for the 58th Alice Springs Show.

And showing off won’t be a shame job. It’s what you do at the Show: ranging from a coloured pencil drawing if you’re a kid, or a pumpkin you’ve grown if you have a green thumb, to parading a one-tonne bull if raising cattle is what you do, all will be vying for that blue ribbon.

Entries are expected to top 2700 across 30 competition categories, facilitated by dozens of stewards and judges, all volunteers, of course.

It’s expected there will be 175 trade space exhibitors. There has been no increase in the space rent for three years.

The Show has changed over the decades, migrating from Traeger Park to just outside The Gap, but it remains that great event where you’ll bump into people whom you haven’t seen all year.

This year Ms Gibbins, running a one-woman small health and safety business as her day job, is aiming to uphold the traditions of the Show, and rectify what she sees as a slight  imbalance in supporting all the disciplines in agriculture.

“At its heart the purpose is being an agricultural show, and the committee hope to increase the participation of  Central Australian plant based growers,” she says.

Ms Gibbins says it’s a way of showcasing Central Australia with the motto “paddock to plate”. The concept touted on the front of the show book – out now – is “heritage, discovery, connections”.

The demographic Ms Gibbins is most keen to attract are “young people as well as families to explore and experience everything the Show has to offer so they have those memories of going to the Show handed down for generations”.

The numbers are impressive: A budget of $400,000 needs to be met from admissions and letting of display space which this year is down around 20%.

Local businesses take up 36% of the commercial space, 16% come from elsewhere in the NT, and the remainder are from interstate, with 18% from SA in the lead.

That drop, together with a cut of direct NT Government funding since 2014 to all show societies, as well as other controversy at the time, was enough to keep Ms Gibbins awake at night.

“At the time we were broke,” she says.

There was a $200,000 infrastructure government grant in 2015 but that was not for operating the Show.

An appointment by the Giles Government of a consultant on Territory-wide show matters “has been welcomed by the committee and  we have  made strong headway in to being a very efficient organisation. The fabric of the Show has always had good bones.”

Ms Gibbons’ efforts have even taken in joining  Toastmasters to iron out her public speaking ‘umms and aahs’.

Ensuring the survival of the Show needs to be a community effort, she says, and “ideas are welcome”. There are a couple of vacancies on the 12 member committee.

This year the iconic Boxing Tent will be back, to be featured in an American documentary.

Sideshow alley will return, of course, although Ms Gibbins says “we don’t want it to be just a rides and show bags Show”.

Other changes are a more rigorous management – “repositioning ourselves ” – and collaboration and cross-promotion with other events, such as the Apex Camel Cup which is usually on the weekend following the Show.

The Society is now gathering data and ideas useful for attracting other revenue and grants; raising the profile in the community; value adding by keeping gate prices down; and working towards using cashless systems.

“We are a not-not-profit organisation, but we are a business albeit run by volunteers,” she says.