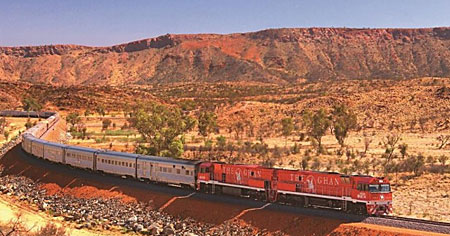 Ah yes, “a historic agreement between South Australia and the Northern Territory [that] will usher in a new era of collaboration” – hmm, yet another one…

This is a perfect example of my oft-repeated contention of a near total lack of corporate memory in Central Australia and the consequent repetition of history.

It may be an “Australian first” to have a joint cabinet meeting between the SA and NT governments in Alice Springs but in terms of strengthening bonds between the two jurisdictions this occasion doesn’t even make it onto the pedestal.

The signing of a “joint strategic agreement” replaces the five year Memorandum of Understanding signed between SA Premier Jay Weatherill and former Chief Minister Adam Giles in Canberra on April 17, 2015 – just over two years ago! That event was also publicised as a “historic first” too, as I recall.

However, as is the wont of public relations exercises these days, the MOU of 2015 was signed in complete ignorance of the MOU signed between SA Premier Dean Brown and NT Chief Minister Shane Stone in Alice Springs on June 15, 1995.

There was lots of media coverage of this event at the time, I’m sure the major media outlets could find their reports in their archives if they tried. [The Alice Springs News covered the event but it preceded our online edition and archive which started in 1996.)

Interestingly, Premier Dean Brown displayed an apparently singular capacity for memory when he recalled his previous visit 16 years earlier when he led a South Australian trade delegation to Alice Springs.

He was correct – as the SA Minister for Industrial Relations, Dean Brown had arrived with a “trade train” on the newly opened Tarcoola-Alice Springs rail line to meet with Acting Chief Minister Marshall Perron to announce the formation of a SA/NT Trade Association on October 22, 1980.

At that time Prime Minister Malcolm Fraser made an undertaking that the line will be extended from Alice Springs to Darwin (pictured), further strengthening the link between SA and NT.

This meeting was held the day prior to a three day trade fair held at the new Civic Centre (v 1.0) which proved very successful and was thought would be the beginning of an annual event.

These occasions all agree on the same kind of issues, such as for developing transport and communications, rationalisation of provision of services, and co-operative development of tourism, mining, pastoral, agricultural and business opportunities, with the ultimate goal of a trade corridor linked to the markets of Southeast Asia.

To a large extent this echoes the vision of a “Great Central State” that lay behind colonial South Australia’s acquisition of the Northern Territory in the 19th Century.