Donations to Salvos stay in town – and then some 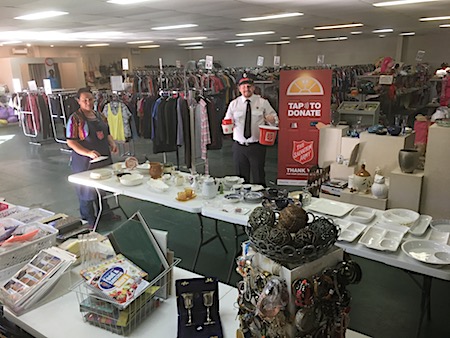 Alice Springs is the big winner each year when the Salvation Army runs its week-long Red Shield appeal.

The Salvation Army Alice Springs Social Program Network has an annual budget of $1.6m to run its operations in town.

About one third of this comes from government funding but the majority of funding comes from the national Red Shield appeal.

In The Alice the appeal is likely to generate over $10,000 and every cent of it will be spent in town, says Captain Stuart McGifford.

The fund-raiser is an important event, giving the many volunteers the satisfaction of being part of a charity that tackles The Centre’s disproportionate share of poverty and suffering – and not just amongst the Indigenous population.

Says Captain McGifford: “We serve everybody in need with equal dignity and grace.”

The Salvos run a men’s hostel with 27 rooms.

They provide drug and alcohol counselling.

Food, vouchers and utilities are available from the headquarters in Hartley Street. At the same site the Waterhole provides showers, toilets and breakfast for up to 80 people a day who’ve been sleeping rough.

And of course there is the Thrift Shop in corner Bath Street and Wills Terrace where the appeal will kick off on Saturday, between 9:30am and 1pm, with all takings going to the appeal.

Other activities will be collection stalls at Yeperenye Shopping Centre, outside the post office and at the airport, as well as volunteers – more are needed, says Captain McGifford – door-knocking in the suburbs.

There will be a BBQ at Bunnings on Saturday next week.

If you would like to help out or give a donation, call Alice Springs Salvation Army on 8951 0200.

PHOTO: Store salesperson Letetia Berends and Captain McGifford are pictured in the Thrift Shop this morning.