The gaolers and the gaoled: new exhibition 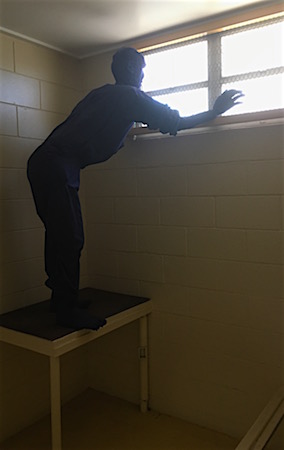 What’s it like to be in gaol? What’s it like to be the gaoler?  What happened to the mentally ill in Alice Springs before there were any specialist services?  How is it that , in a town that has destroyed much of its built heritage, we saved a gaol ? How does a women’s museum make sense of their role, housed in an old gaol?

These are among the questions for which the National Pioneer Women’s Hall of Fame (NPWHF) has looked for answers in its new exhibition, Relationships.

The museum began with a vision (Molly Clark’s) and soon a collection – of photographs, documents and a range of women’s objects – that became an exhibition, curated to tell the story of mostly European women’s experience in Australia, particularly Outback Australia. The exhibition opened in the Old Courthouse, opposite The Residency in Parsons Street, before the move to the Old Gaol – a heritage building looking for a new purpose.

The gaol setting though is far from neutral. Even without interpretation its story makes itself felt, quite distinct from that of the core NPWHF exhibition, and the excellent recent addition of What’s Work Worth?.  There have been a number of one-off events that have reflected on the story of the gaol as a place of incarceration, including historian Megg Kelham’s reincarnation as Mrs (Bertie) Muldoon, a former gaol matron and wife of Its Superintendent, Phillip Muldoon, and last year’s series of performances, under the umbrella title Let me See. 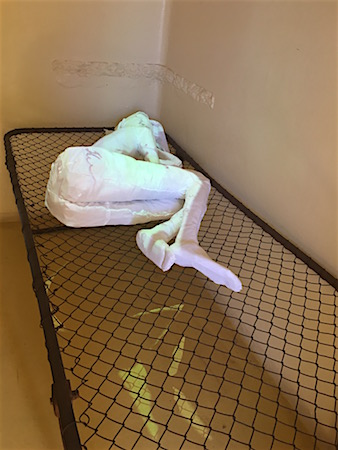 Now NPWHF, under the guidance of curator Dianna Newham, is tackling the  gaol story head on, laying the foundations of a new exhibition upon which they can keep building.

Its title, Relationships, is sufficiently broad to take in everything from the gaol’s institutional history to the stories of individuals who have spent time there – prisoners, prison officers, visitors, the mentally ill – or who have shown an interest in it – journalists, heritage campaigners. What has been achieved so far makes for a thoroughly engaging visit.

Deeply moving are two sculptural works which inhabit two of the cells in what was formerly the women’s block. They stand in for the thousands of individuals who  have been confined at the gaol for different reasons, and express two fundamental states: one is the desire to be free, the other is the prostration of suffering.

The sculptor is Sia Cox, known for her highly expressive soft sculptures and deep interest in the human figure and face.

One of the figures is perhaps Aboriginal and male, the other perhaps white and female, but each has a humanist breadth that allows the viewer to project other identities onto them.

There is a story that the relatives of Aboriginal inmates would stand on top of Billygoat Hill / Akeyulerre  and communicate with those inside by hand signals. Cox’s dark figure stands on the tabletop bolted to the cell wall peering through the high window. The view might be to relatives beyond the gaol walls, but he/she  might simply be seeking the consolation of sunlight, of sky, of a tree or a bird. She/he might be remembering life on the outside, or pondering the challenge of returning to it. These were some of my thoughts; you will have your own.

The white figure lies huddled on a chain-mesh bed frame. While the dark figure is tall and quite robust, this figure appears frail, even wasted, and is closed in on her/his anguish. The outside world is out of reach and appears out of mind. This could be a prisoner at a low ebb – full of remorse and regret, depressed, lonely – but the audio in this cell introduces the visitor to another possibility: this could be a person in mental health crisis,  incarcerated because nobody knew what else could be done. 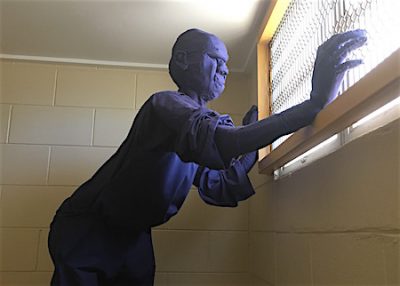 We learn from historian Megg Kelham that Alice Springs did not get its first mental health services until the 1970s. The prison officers hated having to take in a mentally ill person, she says, because they knew the illness was not a crime and the person’s distress could also upset the other prisoners.

She says one of the gaol’s first “mad” inmates was a European man from a station, who had been exposed to mustard gas. What happened to him is not revealed, but there was no treatment available, no programs, as Tony Bohning, former superintendent, makes clear. Just observation, with the more extreme cases sent to South Australia.

Telka Williams, a past matron, recalls a personal friend in crisis who was brought in: she said “I’ve had my shock treatment, walking through that gate.”

Mrs Williams was compassionate but had no appropriate training. If it got “too tough”, a doctor would be called to give an injection.

She tells another poignant story of an Italian woman, with no English,  who had arrived in Alice Springs for an arranged marriage but was rejected by the prospective husband. She had a complete breakdown and was eventually certified and sent to Adelaide: “To me it was heartbreaking,” says Mrs Williams.

This is the story that sticks to the prone figure for me: the whiteness, the ghost of her marriage hopes; the frailness, her feeling of being utterly abandoned. 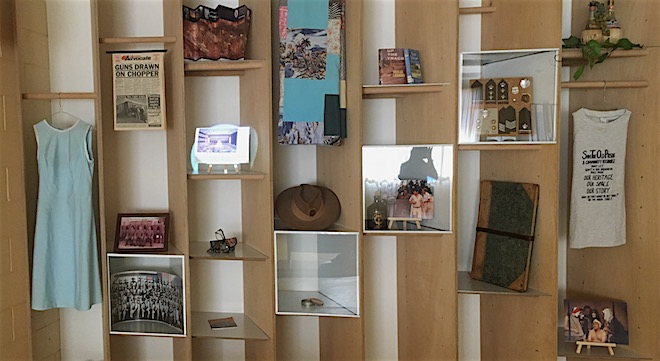 In one of the larger common rooms, a Story Wall, designed by Elliat Rich, has been installed. It shows a range of objects, some of whose connection with the gaol is more immediately obvious than others. It’s worth sitting down here and again tuning in to the audio. A spotlight synced to the recordings picks out which object in the display they are referring to.

A front page of the Centralian Advocate is headlined “Guns drawn on chopper”; a subheading reads “couple fly over gaol”. The couple in question were Erwin Chlanda, then a freelance journalist stringing for commercial TV stations (who went on to establish the Alice Springs News), and a helicopter pilot. In the audio Mr Chlanda explains that he was doing a story for Channel Seven on the Territory’s high imprisonment rate and wanted pictures of the gaol as overlay.

The authorities declined to give him access so he hired the chopper and asked the pilot to fly over the gaol as low and for as long as he was comfortable. Hovering overhead while he got his footage, he could see the prisoners waving to him and the guards running. He later learned that they were arming themselves, even though they had recognised him as a local journalist, and were preparing to shoot.

“Journalism at the point of a gun!” – it made national headlines.

Another quite dramatic story is linked to a pair of glasses. It’s told by former Australian Senator Jo Vallentine, who came to Alice Springs to protest against the presence “in the living heart of our country” of the US spy base at Pine Gap. She was one of the first at the protest to be arrested and charged.

When she returned later for the court case, she protested her innocence, invoking the Nuremberg Principles of  “a higher law than the law of the land”. Nonetheless, she was found guilty and fined but refused to pay. So she was sent to gaol.

Far from any special treatment being accorded her as a prisoner of conscience and an Australian Senator, she got the usual – the disinfecting shower, prisoner garb to wear, and all her personal effects removed, including her reading glasses and briefcase of papers. Without her glasses all she could read were the admonishing signs on the walls and the headlines of the few Women’s Weeklies lying around.  She spent her time meditating and praying.

We hear again from Tony Bohning here, about “Bohning’s chain gang” – the prisoners who built the Larapinta Trail (the object on display is a brochure for the trail). Prisoners would vie for a spot on the team; there was never enough employment to go round, he says, commenting that the biggest problem confronting prison authorities is trying to “combat boredom and occupy minds”. 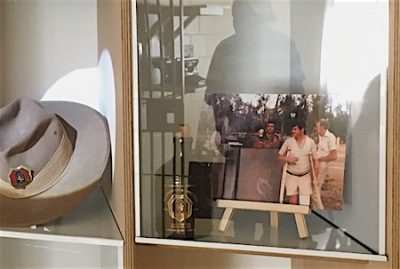 There’s also a liquor bottle displayed with a photograph of some men socialising that Mr Bohning speaks to. He comments on the “strong culture of drinking” among male and female prison officers, who became socially isolated “by virtue of the work” they did.  They became callous, lost their compassion for people, he says. He found this sad, but rather than address the issues, they drank and toughed it out  – they were “hard times”.

These insights into the gaolers, not only the gaoled, have stayed with me. More no doubt can be heard in the stories playing in the men’s cell block, which I have saved for a future visit.

My final stop on the day was in front of the DVD titled Save the Gaol, that runs on a loop in the old kitchen area. It was created by filmmaker David Nixon, with interviews and research by Dianna Newham.

In a little over 20 minutes it tells the terrific story of the concerted local campaign to save to Old Gaol from demolition, as the NT Government of the day intended.

When you see our local political representatives at that time – Alderman (later Mayor) Fran Kilgariff, MLA Peter Toyne – sticking their necks out, joining the demonstrations and the vigils; when you see the daring of some of the campaigners – Mike Gillam, Domenico Pecorari, “Radical Pensioner” Jose Petrick – you wonder where that strong civic feeling has gone. Is there nothing that warrants a determined fight anymore?

Something seems to be missing, that fire in the belly about shaping the town’s future, not being ridden over rough shod.

At least it was there in spades at that time and succeeded in saving the Old Gaol. We can be grateful to the brave campaigners that they did so, when so much else has been lost, and grateful too to the NPWHF, in particular Ms Newham and her collaborators, for finding ways to tell its story.

Below: Mike Gillam and Domenico Pecoraro coming back over the gaol wall after filming inside to prove the government of the day wrong in their assertions that the gaol buildings were beyond saving. With them is an ABC TV news cameraman. Waiting at the bottom to take the ladder was Jose Petrick, “Radical Pensioner”.