Above: Something Somewhere free opening night screening on the council lawns.

A program of films designed to be provocative … of conversations. Not of the movie buff kind, but around what was shown on the screen to be happening in the real world, and perhaps taking the next step – creating change.

This was the goal of the second Something, Somewhere film festival  which screened in Alice from last Thursday night. Curators Alex Kelly, Anneke Rose and Matt Woodham worried that the program might be “too political”, but in the end decided it was just right, “beautifully provocative” within their framework of choosing films, mostly documentary, with heart and with resonance for people in The Centre. 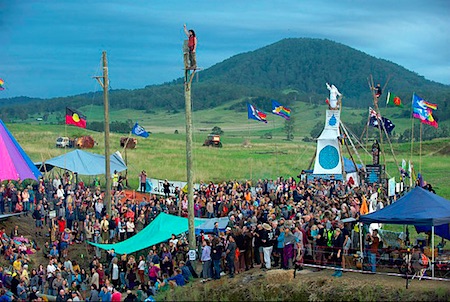 Of the films from elsewhere, perhaps the most obviously resonant and most likely to galvanise people into local action was The Bentley Effect. The film follows, over an intense hour and a half, the rise and rise of community resistance to coal seam gas (CSG) mining in the Northern Rivers area of New South Wales.

Right: ‘Gate A’ at Bentley. Photo by Martin Jacka, from The Bentley Effect gallery.

It does not set out to be a balanced examination of the facts of this industry (see vox pops at bottom). Its starting point is the resistance to it, rooted in people’s feeling for the beauty of the Northern Rivers landscapes and the livelihoods they have created in them.  From there it’s a compelling account of the strength of people power, at least in a country like Australia.

Victory though was not easily won. People had to stay on the case, to remain extraordinarily determined and take real risks. They had to turn up and keep turning up.

The film shows an unforgettable public meeting attended by the relevant state government minister, where the huge crowd captured the agenda, fielding their own experts (qualified scientists with serious challenges) and insisting that they be heard, on the questions that government and the industry find hard to answer. This was not an easy-to-dismiss ‘noisy minority’ in action. The turnout took its legitimacy from an  87% ‘No’ vote in a ballot initiated by Lismore City Council to determine the level of community opposition to CSG in their area.

The role local government took in this campaign was remarkable – highly responsive to their community, as the “government closest to the people” should surely be. Other unforgettable images were the mayors of the various towns in the region ‘manning’ the barricades, quite literally (except that some of the mayors were women). It’s hard to imagine this happening in present-day Alice Springs! 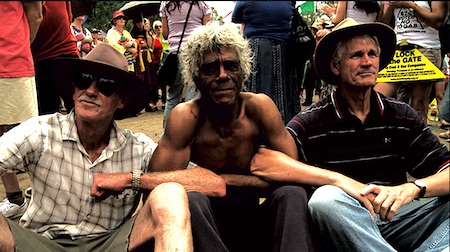 People had to put their bodies on the line, some of them “locking on” to vehicles and to objects buried in the earth, in one case in a tunnel they dug under the road, some of them sitting down on the road as huge trucks bearing drilling rigs advanced towards them, others driving at snail’s pace in front of the rigs. They had to take the risk of arrest, and many were, as the government kept sending in police to clear the way.

Right: ‘Locked in arms’. Photo by Brendan Shoebridge, from The Bentley Effect gallery.

This kind of situation could easily turn violent, but the movement from the beginning was committed to non-violence and it was impressive to see their discipline around this. Filmmaker Brendan Shoebridge, who was present at the screening, was questioned by Alex Kelly about the key ingredients for the movement’s success.

The “absolute adherence to non-violence” was critical, he said. There were strict codes of conduct which people had to sign on to, and designated “peacekeepers” to maintain calm.

The other key ingredient was “grouping up” – forming the action groups. “When a threat comes to your door … it negates all that powerlessness that you tend to feel,” he said. “As soon as you come together in a group you share all that collective intelligence, you start bouncing off each other and amazing things happen really quickly.” 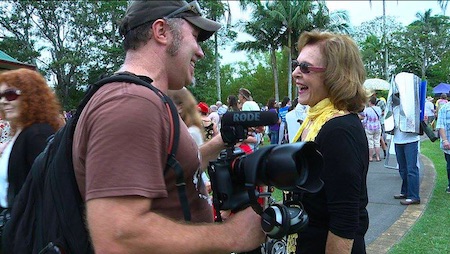 The groups of the Northern Rivers –  of Glenugie, Doubtful Creek and ultimately Bentley, where thousands gathered for the final showdown with an expected 800 police – were deadly serious. At the same time, they showed wonderful exuberance, and it just seemed to grow and grow along with the level of determination.

Some of this joy came, it seemed, from the expanding sense of community between a wide range of people, young and old, men and women, of all sorts of backgrounds. They were not uniformly or even mainly ‘greenies’ or ‘hippies’ as the stereotypers might have it. The presence of local Aboriginal people and their appreciation of this defence of country also seemed to deepen the movement’s sense of purpose.

It would be interesting to see what flows from this experience in the long run. No coal seam gas, importantly, after the government backed down in face of the community’s overwhelming resistance. But what else? Will those new relationships be sustained? as Alex Kelly asked. Time will tell, as it will also of the lesson the local opposition to the gas industry might take from this powerful film.

Question put to people coming out of the screening by ERWIN CHLANDA: This film was about coal seam gas. We may get shale gas. Is one acceptable rather than the other?

Woman: I need to do a lot of learning.

Woman: I wouldn’t accept fracking at all.

Man: They sound both terrible. 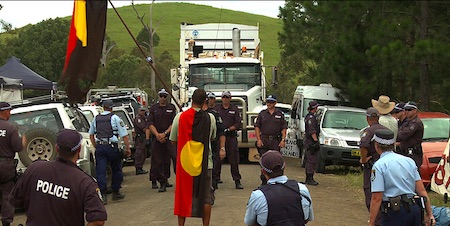 Woman: All of it’s going to threaten our water. The traditional owners have been pretty strong in their statement that they don’t want that in the Territory.

Right: Face-off with police at Doubtful Creek, Jarmbi in the centre.  Photo by Brendan Shoebridge from The Bentley Effect gallery.

Man: We’re spending so much money building up old industries when we can use that same money to build up new industries.

Man: I’ll think about it.

Woman: I don’t think so. Neither is good.

Man: No, both are unacceptable.

Woman: I would have to research about shale gas. I don’t know.

Man: I think the general understanding of unconventional gas is a real issue at this stage. There needs to be some sort of moratorium [ED – there is one at present in the NT]. Once it’s understood, then they can move forward. It can’t move forward until we have a better understanding. It needs to stop until then.

Woman: I didn’t understand the difference but both of them would bother me.

Man: I haven’t researched either.

Man: I don’t really know the difference between them. I guess I’d have to find out.

Man: It’s all bullshit. Conventional mining, unconventional mining is all the same bloody thing, it’s all devastation right? What I’m interested in is a balanced resource, that can be put out to the populace, where it’s not one side of the other, it’s got both sides, people can make up their own minds. Not demonised, focussing on the protests.
I came here tonight thinking I would get some facts. We talk about chemicals that are carcinogenic, massive amounts of chemicals – [they’re] in your bathroom cleaning products.
Unconventional is a more sophisticated version where you can drill sideways, that’s the only difference. It makes less of a footprint on the surface, it does the same underneath. It’s like saying keyhole surgery instead of cutting your ribcage open and doing open heart.

Woman: I don’t really know enough about it.

Woman: I’d have to investigate a bit more.

Woman: I think it really depends on the consequences of shale gassing which I don’t really know right now.

Woman: I don’t want to accept any of them.

Below: A place for conversations. For three nights the vacant bank building a few doors from the cinema became the Something Somewhere lounge. The building and this part of  Todd Street has never looked so good. 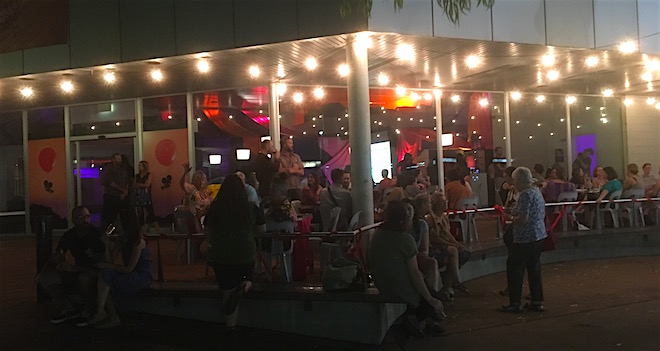