Geocachers – they're all around us 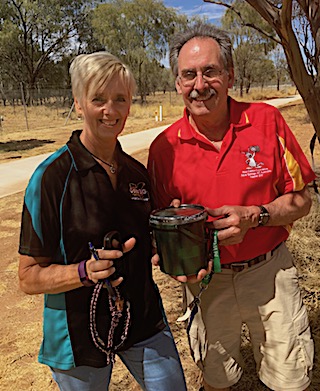 You may be wondering about grown-up people, otherwise of quite normal appearance, in public places looking in, around, on top of and under things, frequently peering at a hand-held gadget, stepping out distances, and emitting yelps of delight when they find something they have apparently been looking for.

These are Geocachers. They are looking for Geocaches. They are people who probably enjoyed playing hide and seek in their younger days, and who have swapped their toys for satellite-based navigation gadgets.

They’re in town, 514 of them, from all Australian states, Switzerland, Sweden, Finland, the USA and New Zealand, for the Red Centre Geocaching Event over Easter.

This is how it works: Geocaching is a reciprocal event. You can either hide a Geocache or look for one.

A Geocache or just Cache, can be pretty well anything. It is put into a container that is then hidden.

Its location is described on a website by its latitude and longitudes. The aforementioned gadgets are global positioning systems (GPS).

The containers are described as large, medium, small (that would be the size of a cigarette packet) and micro. 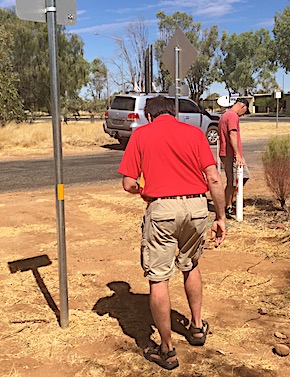 The latter can be the size of a peanut (shelled). Talk about the needle in a haystack!

The GPSs have an accuracy of four meters.

That means if you are in ground zero that peanut could be anywhere in a four meter radius.

A star system further indicates the access difficulty to the Cache location which ranges from being suitable for people in wheelchairs to the Cacher having to abseil.

The only other clues are quite vague, deliberately so, of course, but they are also a charming guide for getting to know a town or area pretty well.

For example: “Take a stroll along the shady Todd River banks on the way to the Alice Springs Telegraph Station. This odd looking structure [in which the Cache is hidden] is an important part of the flood warning system. It lets the town know when the Todd River is likely to flood. The Todd River flows on average about three to five times a year, although in 2010 it [flowed] over a dozen times while in 2009 it did not flow at all.”

It then goes on to tell the Cachers that locals delight in their river flowing, watching “the foamy, bubbly first flow come down from the catchment further up on Bond Springs. We stand on the causeway and feel the river flow over our bare feet”.

Once a Cacher finds the Cache he or she records this in a note inside the container. They usually take a small gift from it, as well as placing one in it. 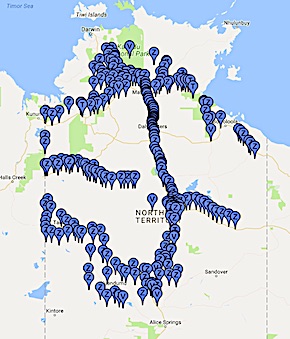 It’s a gentle and nice gesture between people sharing an amusing pastime.

Most Cachers came to Alice in their 4WDs and caravan rigs. Many are camping at Blatherskite Park or elsewhere around town.

Look for the cars with those small flags!

PHOTOS (from top): Sonia (holding a gift) and David Dougherty (with a GPS), from Gosford, NSW, at the Mall Market this morning, checking out clues • Clayton Lucey from Michigan, USA, holding a container, with Sue Palmer. She and her husband travelled from Geraldton via Warburton, the Gunbarrell and Ayers Rock Resort. Good news: She says the formerly ghastly road a few kilometres east of Docker River is now sealed, • Cachers searching. The location of the photo, of course, is highly confidential • Map: Cache locations in the NT •