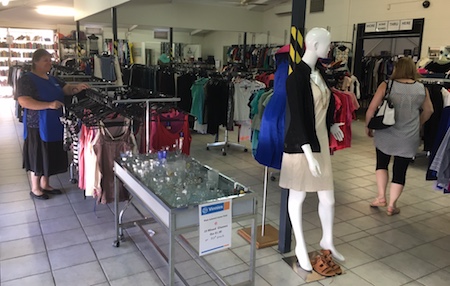 St Vincent de Paul, after being a Godsend to many poor people in Alice Springs,  assisting them with a string of initiatives and run by just three staff and 120 volunteers, with a dedicated conference, is now but a shadow of its former self.
The self-sufficient and financially stable organisation declined from June last year when after the resignation  of centre manager Melissa Durston, personnel from Queensland, on FIFO assignments, took over, says her successor Ruth Fox.
While the shop survives with a skeleton staff, the emergency assistance office and food van are shut down and clothes donations, without even removing them from their bags, are being taken to the dump.
Previously surplus was taken to the Salvos, sent to Vinnies in Tennant Creek or given to other local op shops. 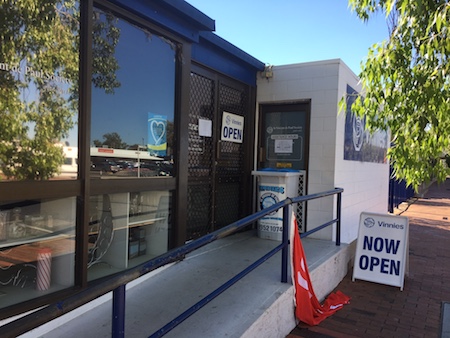 Mrs Fox, who was engaged late last year, recently was given just minutes of notice to leave the premises, five days short of the end of her probation period.
She says the number of volunteers was down to six or seven when she took over, and after her sacking only four remain.
There was no hand-over of the operation which was well-organised less than a year ago.
Ms Durston says in Alice Springs there is a level of need for Vinnies that is 15 times greater than the national average, because of the large percentage of impoverished people.
Ms Durston is well-known in the business community for organising the CEO Sleep-outs.
“I am very disappointed that the organisation has deteriorated so quickly under Queensland management,” she says.
Vinnies Queensland and NT spokesman Hayden Calderwood, when asked to comment, said: “Thank you for the opportunity to respond [but] I’m sure you can understand due to the sensitivity of the matter and to respect the privacy of all individuals involved, we can’t delve into the particulars around volunteer or staff changes.”
UPDATE Friday 10am
The St Vincent de Paul Society NT spokesperson provided the following statement:-

Vinnies Alice Springs values the contributions of our wonderful volunteer team, who have been helping us for over 50 years to provide affordable clothing and food through the Vinnies shop and much needed support in the local community to give people a hand up.

We are aware of the departure of one volunteer in the past month. We appreciate their efforts and hope they consider volunteering with us in the future.

We acknowledge that over the past year there have been some changes to our volunteer team, however like any voluntary organisation we must seek out new volunteers to keep our operations going.

Community initiatives run by the Alice Springs Conference of the St Vincent de Paul Society, such as the food van which is not currently operational, are dependent upon adequate member involvement and funding to ensure their operation. Activities in the local community have not been affected by staff changes at the Vinnies shop.

Volunteering with Vinnies is a great way of meeting new people and making a real difference in the local community. We encourage anyone wanting to find out more to drop in to the shop or go to the Vinnies website.

Since then, the focus has been on making sure services continue and that Vinnies in the NT is sustainable so that we can keep supporting people in need.

Our focus has been on the safety and security of our staff, members and volunteers, and ensuring the Society is transparent in its operations and has adequate policies and procedures in place to ensure good governance and financial accountability.

The Society will continue to operate at a local level to ensure our support is flexible and responsive to the needs of the community.