What the open letter didn't say 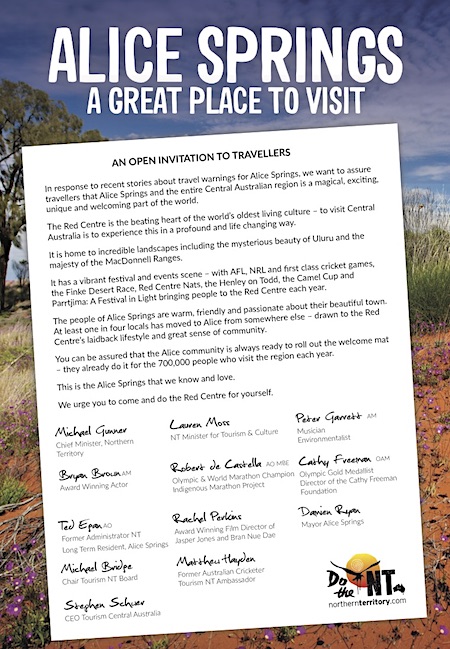 The promoters of an open letter titled “Alice Springs – a great place to visit” have not contacted the embassies of countries where travel warnings have been issued, describing the town as dangerous.

No requests to withdraw the warnings have been made to the embassies.

One of the 12 signatories and an enthusiastic promoter of the letter is Mayor Damien Ryan. When asked “do you think people, especially women, should exercise caution, especially at night in Alice Springs? For example, not to walk alone?” he said: “I always encourage everyone anywhere in the world to be carful, no matter what they do.”

Mayor Ryan said the open letter initiative was a response to “discussion by journalists” and “recent stories about our town”. He said it was an invitation to people to come to Alice Springs “and find out for themselves.

“I’ve had a large number of calls congratulating us on making a stance … on standing up for our town.”

The letter (pictured) appeared as advertisements in the The Age, the Sydney Morning Herald and the Brisbane Courier on Saturday at a total cost of $25,678.98, paid by the NT Government’s Tourism NT.

Asked whether bringing the Mall to life was a major issue during the campaign for the election of the current council, nearly five years ago, Mayor Ryan said: “It was not part of my election campaign.”

We asked whether there are more tangible ways to promote tourism than this open letter: “Why is there no sunset entertainment in the Mall every night during the tourist season and the shoulders? It seems facilities and staff of the council at one end, and Tourism Central Australia in the middle, would be ideally placed to organise and facilitate Mall entertainment, seven days a week, for a few hours at the end of the day. It would be very nice for locals as well. Why is it not happening?”

Mayor Ryan replied the council sees its role not as a creator of events but as a supporter – and that applied to some 100 events, including all the big ones such as the Finke Desert Race, NATS, Henley on Todd, Masters Games and Bangtail Muster. An exception is the public Christmas party which is a council initiative.

We asked why is there an assertion in the open letter that Alice Springs is home to Uluru, given it is 450 kms away and visitors fly there direct, with the active encouragement of Tourism NT?

Mayor Ryan said “Uluru is in Central Australia” and there is a “great connectivity” with Alice Springs. “Every person who comes to this region is important to us.”

We asked: “The majority of crime – clearly the reason for the warnings – is committed by young people neglected by their parents who are consuming excessive amounts of alcohol. It seems a no-brainer that effective supply restrictions are needed. Which ones do you favour?”

Mayor Ryan said he is “very impressed” with the Point of Sale Intervention [cops-at-bottleshops] initiative in the past two years and said it should continue alongside at Banned Drinkers Register proposed to be re-introduced. Both are needed, he said.