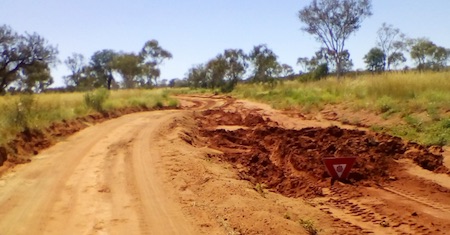 Hello climate change: The consequences of catastrophic weather in the Western Desert in December and January are still reverberating.

In Kintore 240mm of rain fell in two hours. That’s about the region’s average annual rainfall. The Tanami Road was out for 60 days, and so, for various periods, were countless bush roads and tracks.

The Granites gold mine had to close. Nyirripi and Willowra communities were running out of food. Cattle stations, too, were getting low on supplies and could not truck cattle at a time of high demand.

The systems put in place to cope with life in the remote outback were pushed to their limits, and human relationships came under stress.

A case in point is the area north-east of Yuendumu which in turn is 300 kms north-west of Alice Springs.

The local government Central Desert Regional Council (CDRC), which covers 283,000 square kms, three and a half times the size of Austria, has a depot in Yuendumu.

The responsibility for road maintenance is shared between the NT Government which, in that region, looks after the Tanami Highway, nearly all sealed now to Alice Springs, and the road leading from Yuendumu via Mt Denison, Coniston and Pine Hill to the Stuart Highway, just north of Aileron.

The local government looks after – among many others – the bush roads to Nyirripi, about 150 km to the west of Yuendumu, and the “back road” from Mt Denison to Willowra, a 100 km dirt track to the north.

Both Nyirripi (population about 250) and Willowra (pop 221) were running out of food. Their airstrips were mostly serviceable but flying in supplies is expensive, says Glenn Marshall, who supervises road maintenance for the CDRC.

Not so, says Ms Martin: The main supply road to Willowra is from the Stuart Highway turn-off just north of TiTree. That road was open before a grader bogging fiasco at the edge of the Tanami Desert.

Mr Marshall says the only way to get his road machinery, ahead of the supply vehicles, to Willowra is via the government road through Mt Denison which, according to local resident Dianne Martin, was officially closed because of flooding and a soft surface.

Mr Marshall says the closure may well have been on the website but there was no “road closed” sign on the road and local staff “were confused about the situation”.

Ms Martin says she has seen a road closed sign at the Yuendumu end of the Mt Denison road.

Facing what he reasonably described as an emergency – some 500 people running out of food – Mr Marshall despatched a grader.

It got bogged on the government road.

A second grader was sent out to retrieve the first one. It failed to remove the first grader and it was sent back to Yuendumu “but admittedly did some more damage to the road”.

Mr Marshall says the front end loader managed to get the first grader unbogged but also “did a bit more damage”.

Ms Martin says the government road was seriously damaged, stopping to this day trucks bringing supplies from Alice Springs and taking cattle there, via the Tanami Highway.

Mr Marshall says the section of the government road between the Willowra turn-off and Yuendumu is now open but only for four-wheel drive vehicles and not for trucks.

The other option normally available, going east on the government road, was not viable because that road was closed from Yuendumu via Mt Denison to the Stuart Highway. It was closed until about a week ago.

Tension between the local government and the cattle station fraternity was escalating.

Mr Marshall says he acknowledges the graders were sent out “a bit before we should have but the situation was outside the normal.

“We damaged 30 meters of road,” says Mr Marshall. “Any other damage might have been done by other vehicles.”

Says Ms Martin: “Mr Marshall is omitting that it was 30 meters on each of four sections of the road. And there could not have been any other vehicles because they couldn’t get onto the road due to the damage done by the CDRC.”

Why were they grading a road not under their responsibility, asks Ms Martin.

Mr Marshall says although they were using the government road just to get to the Willowra road, they did lower the blades in sections that were too rough.

Who is going to fix the road, asks Ms Martin, the local government or the NT government?

She says station people are running out of diesel for their generators, consequently cannot use power tools, food is getting low, and income is lost while cattle buyers are paying big prices as the trucking season is just getting under way.

PHOTO: Bog on the Yuendumu to Mt Denison road. The by-pass is a recent addition.