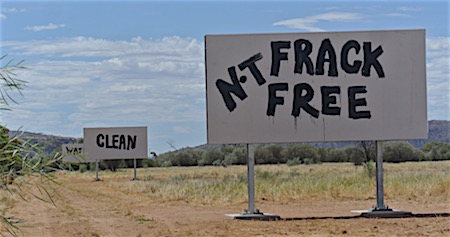 Six new, large, double-sided structures for advertising signs on the South Stuart Highway were pressed into service over night – not quite the way their owner, the airport, had in mind.

Anti-fracking graffiti in big, black letters are covering the formerly blank billboards, on airport land, opposite the ‘Welcome to Alice’ sign.

Lauren Mellor, from the Frack Free Alliance, says: “The community groups linked to us are focused on getting our message across as part of the fracking inquiry process and we are not involved in this action.”

Airport manager Dave Batic says a report has been made to the police on what amounts to trespassing on Commonwealth land.

Police say the graffiti were reported at 9.40am today. Investigations are still under way and police are seeking witnesses who are asked to ring 131444.

Mr Batic says the sign structures – erected only in the last few days – are airport property and are part of an initiative to promote the town and businesses.

Revenue from this will go to the airport company, he says.

Town council permission was not required but all NT Government rules have been followed, such as minimum distance from the road.

He says there have been no complaints about advertising billboards drawing away the attention of tourists, just arriving in town, from the vista of the ranges to the north.