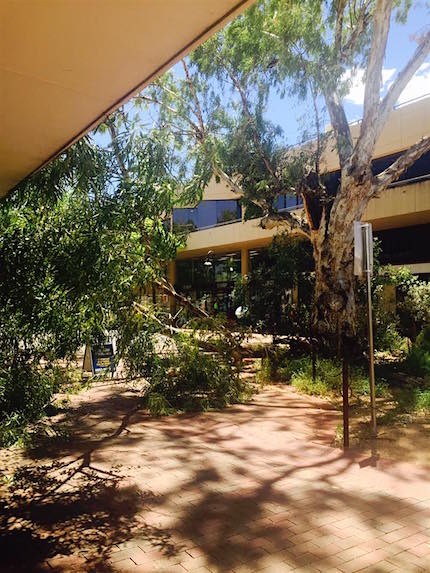 Arborist Geoff Miers advised the Town Council almost two years ago to reduce the weight loads of the limbs shed within the last weeks by the old river red gum standing at the intersection of Parsons Street and Todd Mall.

His advice specifically identified the largest of the three limbs, which crashed to the ground outside the Intersport shop on Parsons Street last Thursday, 2 March (see photo at right, courtesy Dunya Ganama).

Mr Miers also identified at least one of the two branches that dropped onto the balcony at Alice Plaza on 19 February.

Council’s Acting Director of Technical Services Scott Allen has confirmed that the advice was received but it appears to never have been actioned.

This would have been the responsibility of the Parks and Gardens Supervisor who has since left his job with council.

The document, delivered by hand rather than coming in by email, also got lost in the system.

Mr Allen says council apologises for the breakdown in communications that led to this situation.

He says no pruning has been done on the old tree in the interim, that is, since March 2015 (up until the remedial pruning done last week).

“We understand that people are upset, we won’t hide from what has happened, we won’t try to sugar-coat it,” he told the Alice Springs News Online this morning.

He said staff will work diligently to make sure that this does not happen again.

Council has a qualified arborist whose duty it is to oversee the state of health of the 20,000 trees in public places within the municipality.

Mr Allen says the arborist has inspected the old tree since the incident last week.  In fact, he undertakes a routine visual inspection of all trees in the mall area twice a week and had not identified any problems with the old tree.

The Alice News asked whether it might be useful in future to get a second opinion from another qualified arborist. Mr Allen did not rule that out.

He reiterated that council’s clearance certificate from the Aboriginal Areas Protection Authority (AAPA) allow it to take immediate action on any tree if an imminent threat to public safety is detected.

However, council always does endeavour to contact AAPA “as soon as is practicable” if trees of significance are involved.

Last Thursday, he says council took action first to remove the fallen branch from the street and then contacted AAPA to advise of the situation.