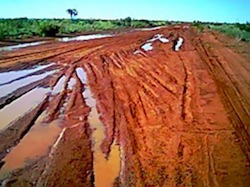 Following an extended period of rain and flooding, assessments are underway to determine the repairs needed on the Tanami Road, according to a media release from the NT Department of Infrastructure, Planning and Logistics.

The Tanami region has reportedly exceeded its average annual rainfall in the first 39 days of 2017 and December and January were the wettest months on record in the last 46 years of data collection.

Water has damaged the road between 484 kilometres to 527 km, the Granites Mine intersection. Repair works have been undertaken to make this section passable, enabling the conditional opening with weight restriction in place.

Roadtech Constructions Pty Ltd is currently undertaking gravel resheet works between 510 km the mine, and there will be further repair works to occur as recent sunny weather has assisted in drying the road and improving access to enable assessment and repair of damaged sections.

Works are expected to be completed by June, says the release. 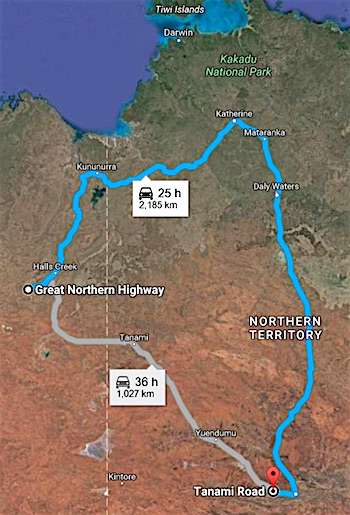 The portion of the Tanami Road in Western Australia remains closed.

The government is working towards sealing the Tanami Road and has invested $16.5m since 2014-15.

A tender to upgrade the road between 252 km and 260 km to a dual lane sealed standard will be released in coming days, with works expected to commence by mid May.

A joint WA and NT business case to seal the entire length of the road was submitted to Infrastructure Australia in June 2015.

In February 2016, Infrastructure Australia refreshed the National Infrastructure Priority List, with the Tanami Road again listed as a project of national significance.

Infrastructure Australia is currently working with the NT Government to finalise assessment of the proposed business case.

MAP by Google. The numbers tell it all.