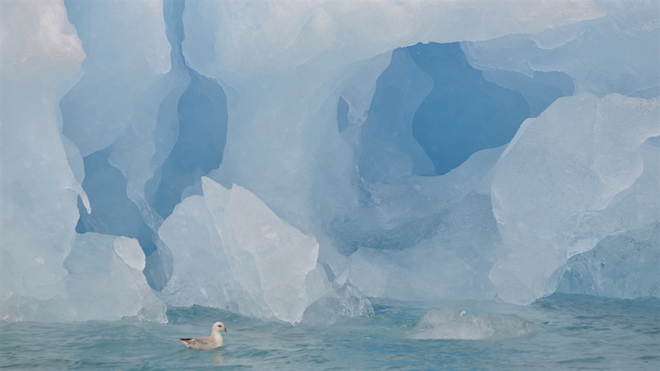 Above: Melting sea ice, a still from 24hrs, digital video by Suzi Lyon from her exhibition ‘Into Blue’, expressing her sorrow at what is being lost to the world as a result of global warming. The exhibition, at Araluen, closes this Sunday 2pm, with contributed performances responding to its themes.

The evidence for major climate change in central Australia is strong, say two scientists who have worked in the field recently. While melting ice caps have become its universally recognised symbol, we ignore the impacts closer to home at our peril. KIERAN FINNANE reports.

The inter-annual pattern, marked by increased variability in rainfall combined with increased average temperatures, has become more marked since the 1970s, as long-term rainfall records reveal quite clearly. The changes intensify features of a climate considered one of the most variable and unpredictable in the world.

The majority of people now living in Alice Springs have not been here long enough to have personally experienced this change. This obviously does not go for local Aboriginal people and a small number of long-established non-Aboriginal families. Nonetheless the population in town in 1971, at 11,179, was less than half of what it is now, even if it grew rapidly over the next decade to 18,395 (as historian of Alice Springs Peter Donovan tells us). Local demographics are also marked by high turnover. Northern Institute research suggests a total turnover figure of two thirds in the years 2006-11 as “conservative”. As Dr Sparrow says, “Of all the people that I know in Alice, only a tiny minority lived there in 1973.”

Weather records have been kept long enough in the region for scientists to discern trends, allowing them to talk about climate rather than weather. The missionaries at Hermannsburg (Ntaria), 130 kilometres west of Alice, began to record rainfall there from 1889, laying the foundation for a continuous record of almost 130 years (broken only in 1999, 2001 and 2003).

It shows that there were relatively modest variations in rainfall in the years up to the middle of last century (above, 1889-1950, chart produced by Dr Sparrow). Sure, there were wet years and dry years but there weren’t the extremes of difference we experience now.

In the early 1960s there was a seven year drought, followed by a marked increase in both very wet and very dry years (below, 1951-2013). The highest rainfall on record in Ntaria fell in 2000, with well over 1000 mm, while there have been four years since 1970 with falls of less than 100 mm. These big variations have persisted for more than four decades now.

Alice Springs rainfall records date back to 1943. They show the same shift: more big rains, although not quite as high as Ntaria’s record, and more very dry years since the 1970s.

To the east, at Ltyentye Apurte (Santa Teresa) and on nearby Allambi Station records have been kept only since the 1960s. That period is considered too short to discern a trend, even though the records also show big rains in the mid-1970s, at Easter 1988, in 2000-1, and again in 2010.

The mean in the Alice Springs region may have increased by only 10% across the years since 1970, says Dr Sparrow, but the variance has increased almost four-fold.

In Alice Springs temperature records were also kept from 1943. Again, the shift is clear, with the warming occurring at both ends of the scale. There are now more years with many very hot days (over 40 degrees C). In the 1940s and ‘50s, there were only two years with more than 20 very hot days; in the 1960s to ‘80s, there were nine, and in the 1990s to 2000s, ten years had more than 20 very hot days. There is also a trend of more days below freezing (0 degrees C), usually in the years immediately after big rains, says Dr Sparrow. 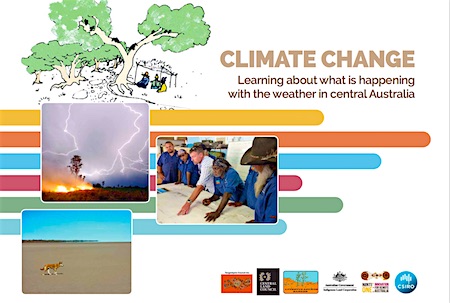 These data were gathered together in a recent report produced by the CSIRO as a Climate Adaptation Flagship project, together with Ninti One and the Central Land Council (see footnote for full credits). The project’s purpose was to help Indigenous communities understand from a local perspective the challenges of climate change and how they can deal with them.

So, what are the impacts, the things that should or ultimately will drive adaptive change?

The Ltyentye Apurte weather chart reports big fire events following the high rainfall years. While this is not noted on the Alice chart, our memories (and our news archive) tell us that fires raged in the region in 1975, 2000-1 and again in 2011-12, following big rains and the resultant high fuel loads, exacerbated by the spread of the weed, buffel grass.No doubt we need to prepare for wildfires again soon, following this very wet summer and exceptional plant growth.

The Ltyentye Apurte Rangers, who worked with Dr Sparrow and other scientists on the adaptation project, have focussed efforts particularly on combatting erosion on their country. Some of the causes of the erosion are historic – coming from the introduction of cattle and horses, which reduced vegetation cover in dry years and whose hard hoofs break the soil crust – but the big weather variations since the ‘70s have had a major impact. The increasingly dry years further reduce the growth of grasses, exposing the soil to greater risk when the big rains come and the fires follow. 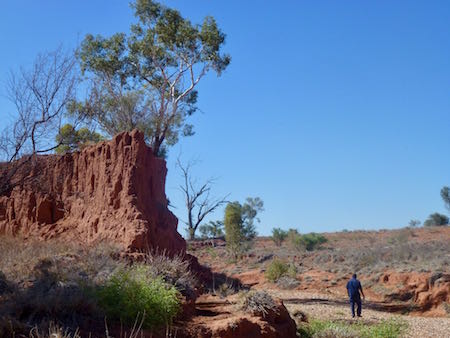 The rangers’ efforts over a decade to repair past damage will help protect their country against worsening ravages brought on by climate change: they have been constructing ‘whoa-boys’ to divert water off roads, and mounding soil to form ponding banks that slow and disperse the flow of water across the landscape. They have also fenced off large paddocks, one to keep out feral horses, cattle and camels, the other to keep in the locals’ own horses.

Such immediate repair and protective action can almost be envied from the perspective of urban Alice Springs.

Through its take-up of solar energy, the town has made a concerted effort, both public and private, to become more self-sufficient and to act as a good global citizen by reducing its carbon footprint. This effort has been undermined by the recent purchase (despite considerable local protest) of gas-fuelled generators for the Owen Springs Power Station.

The big threats of increased wildfire risk due to the explosion of fuel loads, particularly weedy grasses, and of a major flood are beyond the efforts of individuals and small groups. While the town waits for government action on even beginning to know what to do about flood mitigation and while buffel grass takes an ever increasing hold of the landscape, what is the scope for meaningful adaptive change?

There’s no clear take-home message, says Dr Sparrow, and that’s true for urban populations around the world. Adaptation in Darwinian evolutionary terms happens in response to a selective force, so species don’t adapt in advance. Asking people to make adaptations based on a prediction of the future is inherently risky: people could make adaptations that turn out to be to their disadvantage.

In this sense, adaptation may be the wrong term to use, even though it is entrenched in CSIRO science, says Fiona Walsh. Formerly with CSIRO, she also worked on the climate adaptation project. Trained in evolutionary biology, she says adaptation can only really be seen in retrospect.

Some people believe that desert eco-systems are pre-adapted to the changing climate, that they are more resilient, says Dr Walsh, but “from what I’ve seen, I don’t think there’s evidence of that”. 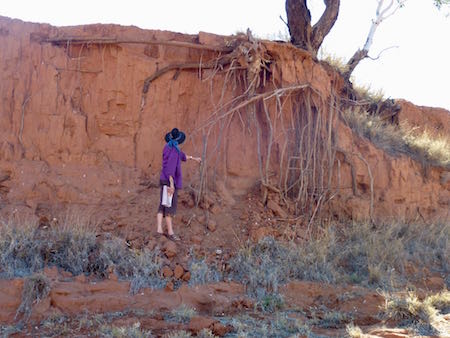 She points to the major issues already canvassed, particularly wildfire, and in the landscape she sees erosion gullies, like the ones at Ltyentye Apurte, as the desert equivalent of melting icebergs: the sentinels of a challenging future.

Dr Walsh also questions the presumed resilience to climate change of Aboriginal people, especially in remote communities, as they are already having to deal with so many other contemporary challenges.

“If people have the income they can buffer themselves against higher temperatures, by staying indoors more with air-conditioning, swimming pools, air-conditioned cars.”

All these things are less accessible to people on low incomes and who may not necessarily own their houses. But there are some relatively inexpensive strategies for buffering against heat, says Dr Walsh, and there should be much better information available (for instance, through local government) on the simple things that can be achieved.

At a townscape level, better urban design to shade buildings and streets is “the big one”. Orientation of buildings to the north, white roofs, wide eaves and verandahs, the right kind of tree-planting – the sustainability features are well known.

Individual householders may be able to do some of this themselves. In her own home, for example, she tossed up whether to invest in a shade structure for her exposed western wall or to go the natural route. She chose the latter, harvesting rainwater off the roof and driveway and choosing the right tree species, planting both on the verge and in her garden, resulting in a very well shaded western aspect within five years.

Dr Walsh also notes the efforts of small groups across the town (some private individuals, some with registered Landcare groups) who labour hard to combat weedy grasses, restoring public areas to better condition, allowing the return of native species and people. Examples are to be found in Ankerre Ankerre (the Coolibah Swamp) and at Spencer Hill.

“The actions of these individuals and groups are really generous and important while we wait for governments to rise to the occasion,” says Dr Walsh.

Heat is on as NT in limbo on global warming policies by JIMMY COCKING (January, 2013)