On the ground, in the sky, 1 Territory seeks sporting excellence 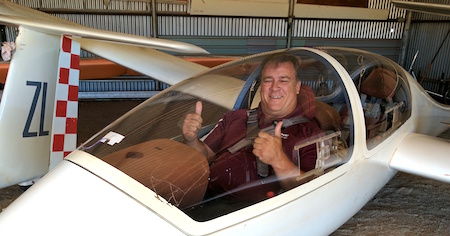 1 Territory president Braedon Earley says he would turn Alice Springs into “the epicentre of sports excellence in the NT, Australia and quite possibly the world” if his party wins government.

“The economic future of Alice Springs hinges on ramping up its natural advantages of superb climate, spectacular scenery and environment and wonderful Territory hospitality,” he said.

With its elevation of about 580 metres above sea level, Alice Springs would be one of the highest places in Australia to train and prepare athletes and machines for national and international competition.

Rob Clarke and the Redtails have similar plans, to lift the town out of the doldrums and create opportunities for young people.

Mr Earley (pictured above in a glider at Bond Springs aerodrome north of town) says one of the sports to benefit would be soaring.

In the past the region has has been recognised as one of the world’s best for the sport, with German pilot Hans Werner Grosse setting a string of world records. They included the largest triangular distance, 1,306 km in 1981. 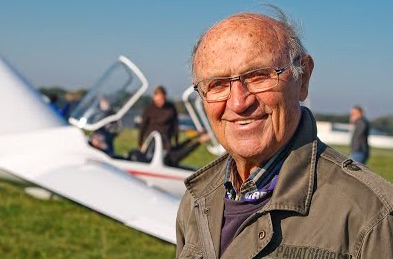 For that flight Mr Grosse (at left) used an aero tow launch to about 3000 feet in Alice Springs and then took his engine-less glider, with a wingspan close to that of a Boeing 737, to Ayers Rock, Marla Bore in South Australia and back to The Alice, using The Centre’s powerful thermals along the way.

“The economic multipliers for local businesses plus the opportunities for local and Territory sports men and women are enormous. The return on investment would far exceed the benefits of sponsoring a Rugby League club based in another state or supporting Ministers on overseas junkets.”

“One important aspect of achieving the highest utilization of facilities and getting the highest rate of return is employing the principles of multi- use at the design stage” he said.

“The cost of facilities construction, both new and upgrades, is in the order of up to $300 million over 15 years. The end cost would depend on the buy-in by national and international sporting bodies as well as commitment by the local, Territory and Australian governments. It is entirely achievable – it just requires focus, determination and leadership by a Territory Government.

“The Territory Labor Government must start immediately to seek the support of all sporting groups, governments and locals and make this project happen.”