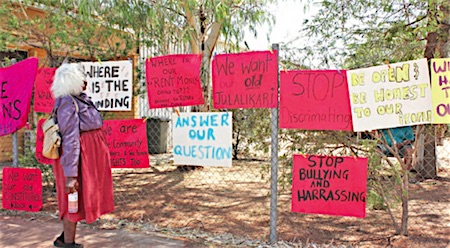 
Sir – We have placed the Julalikari Council Aboriginal Corporation under special administration.

The corporation is based in Tennant Creek.

As one of the largest Aboriginal and Torres Strait Islander corporations in Australia, it is an icon in the NT.

The corporation was established in 1989 to alleviate poverty and improve the wellbeing of the Aboriginal people who reside in the Barkly region.

Julalikari is funded by both the Commonwealth and Northern Territory Governments to provide a range of housing, community and social services for people living in Tennant Creek and surrounding homelands and communities. It also has investments in a number of commercial businesses in Tennant Creek.

The corporation is the largest employer in the Barkly region, employing over 90 permanent staff.

Julalikari has been through a difficult period. The range of programs and services it looks after is vast, and it’s facing significant pressures and criticism about its ability to perform effectively.

An independent examination in October 2016 revealed the corporation had experienced
a significant breakdown in its relationships with members, key stakeholders and commercial partners. The loss of support has impacted upon the corporation’s ability to respond
to important governance and operational matters.

There is frustration on all sides. The special administrators will provide an opportunity for all parties to restart conversations in good faith, restructure the corporation’s governance, and refocus its energy on delivering high quality services.

Julalikari is solvent and in a strong financial position.

We have appointed Mr Gerry Mier and Mr Tony Jonsson from the Cairns-based firm Grant Thornton (Australia) as the special administrators until August 23, 2017.

They will focus on restoring confidence in the corporation’s governance processes, improving communication with key stakeholders, and ensuring services to the community are not compromised.

Photo: Jordan Gillard, Papulu Appar-Kari, published in a report supplied by the Tennant and District Times to the Landrights News issue of November 2015.