Canberra to hear Arrernte plans for a Living Culture Centre

In a small weatherboard house at the base of Akeyulerre (Billy Goat Hill) deep grassroots planning for an Arrernte Living Cultural Centre is close to being ready for presentation in Canberra. Except ‘grassroots’ is the wrong metaphor. It’s the image of a whole tree that Arrernte people, who gather in the house now also known as Akeyulerre, are using to properly describe their plans for growth  – roots, trunk, branches large and small, and fruit.

We’ve been hearing a lot lately about the Territory Government’s ambitious plans for a national Indigenous art gallery for Alice Springs. A group independent from government, Nganampa Anwernekenhe (chaired by Harold Furber), is also doing groundwork for a national Indigenous culture centre to be based here. The NT government’s future pledges to both are $50m and $20m respectively.

The Akeyulerre plans are more modest in scale, while also more thoroughly conceptualised and more advanced. This is not to make a case that their Living Culture Centre should come at the exclusion of the other projects. On the contrary, the Elders believe those projects might well be a terrific thing for Alice Springs / Mparntwe. However they won’t be achieved in the “proper way” without attention paid to the Arrernte traditional owners of this country as they seek funded support to practice and nurture their culture across the generations. In this way they will be able to make a full contribution to the larger-scale initiatives.

In a fortnight Amelia Turner, the Arrernte female chairperson of Akeyulerre Inc’s committee, and its manager Penny Drysdale (pictured together at left), will fly to the nation’s capital to talk with top echelon advisors of the Department of Prime Minister and Cabinet (which encompasses Indigenous Affairs).

This won’t be a first meeting. Rather it will build on a number of visits to Akeyulerre Inc by both Minister Nigel Scullion and senior bureaucrats. There they would have seen the organisation – governed by Arrernte Elders and named for the sacred hill that rises behind the Stuart Terrace block – quietly and steadily fulfilling its role as a gathering and healing place.

Until the advent of Akeyulerre, incorporated in 2000, there was no such place in town for its traditional owners.

Says Ms Turner: “It’s a really significant place, right near the hill, for Arrernte families to strengthen law and culture and learning to pass down to the next generations, and for sharing our knowledge with broader communities as well.”

Initially the organisation had no funding; since its incorporation short-term, shoestring injections of funds have supplemented the vital human and cultural capital that keeps it ticking over. Recently this has included a 12-month grant of operational funds from the Indigenous Advancement Strategy (expiring in June) and, crucially for the current plans, a grant from the Aboriginals Benefit Account to buy the house on Stuart Terrace  as well as the neighbouring property.

Supplementing this has been some philanthropic support (including a $50,000 donation from a local health practitioner as well as pro bono work by architects and a cost consultant) and the income from Akeyulerre Inc’s social enterprises. In the last financial year their traditional healing products, under the business name Interrentye, turned over $48,000 in sales; their fee-for-service smoking ceremonies, close to $25,000. Clients for the ceremonies included the hospital, Congress, big conferences, as well as private families. 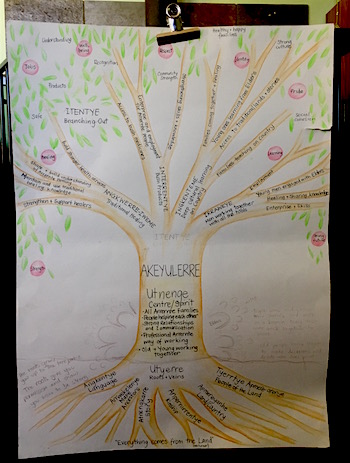 In 2015-16 these activities provided more than 1300 days of meaningful work to some 50 Arrernte individuals. Building on this, in part, is driving forward the plans for Itentye, the Arrernte Living Cultural Centre. But this is not the root, trunk or branch work of Akeyulerre Inc. This is “the juicy fruit” and typically the only part of the tree that funding bodies are interested in.

At right: Akeyulerre Inc’s business plan developed around the metaphor of a tree.

On the Akeyulerre Inc model, that fruit will only be able to grow and be harvested in a sustained way if the whole tree is kept healthy. Its roots are sunk deep in the ground of traditional Arrernte life – land, language, law, culture, kin – while the trunk is the contemporary organisation that the Elders and their supporters have developed to help families respond to the challenges of present-day life.

Branching out are the programs that underpin well-being, ranging from trips to country (some focussed on learning, especially for children and young people, others on healing and cultural practice for men and women) to employment and something so simple yet vital as large family gatherings.

“If we don’t give enough space and time and energy to the cultural roots of this place, we can’t be delivering all the branches,” says Ms Drysdale. “[Governments] tend to fund in a way that neglects the roots. That’s why we’ve been working so strongly with the Prime Minister’s department and Minister Scullion.”

Their plan for growth, calculated at 15% per year, is as it has always been, slow and steady.

“It takes time for the tree to grow by itself to have all those energies,” says Ms Turner.

The ask is for staged increased operational funding support over five years, some of which will hopefully come from the NT Government, as it has in the past. The present annual budget, from all sources including their own income, is around $750,000, but certainly more is needed to be able to  establish and grow the Living Culture Centre.

They are also anxiously awaiting a response on a submission to the Aboriginals Benefit Account (for which the Minister has sign-off) for a capital grant of around $5m to allow them to renovate and where necessary rebuild their premises.

There they will create Itentye as a place where the families can host visitors, locals and tourists alike, who want to learn about Arrernte culture directly from Arrernte people themselves.  This, in the Akeyulerre vision, will provide not only more opportunities for meaningful employment and the resulting income, but also greater inter-cultural understanding.  Win-win, as the saying goes.

It’s the whole model, as one that is working for them, that Akeyulerre Inc want the government to support. In the wake of the annual roll call of expensive failures in meeting Closing the Gap targets, the government might well be in the mood to listen to a plan that plays to strengths.

“When we explain it for non-Indigenous persons, who are not really knowledgeable about Aboriginal law and culture, they are stunned, they say, ‘Oh yeah, that’s how it grows!’” says Ms Turner.

Below: Akeyulerre Inc’s premises on Stuart Terrace. The green house at No 3 is used as home base at present. The dilapidated property at No 5 is not usable in its current state. 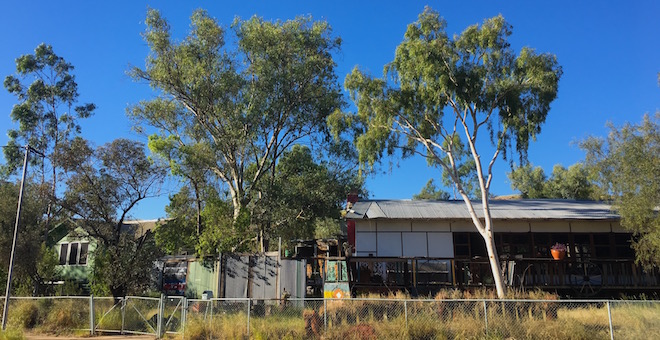 About the national Indigenous art galley: