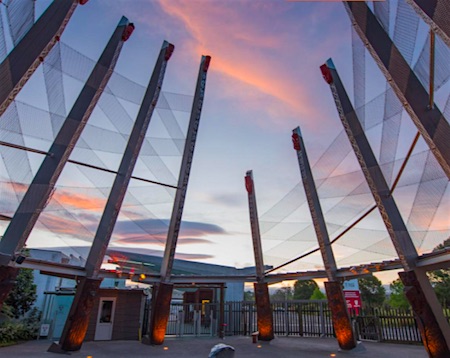 Chief Minister Michael Gunner, in his speech today outlining “The Year Ahead” has put dates on the next steps to be taken in preparing to build a national Indigenous art gallery in Alice Springs, which we reported on  last week.

Left: Artwork at the entrance of Te Puia, the Maori arts and crafts institute at Rotorua, NZ. Choice of illustration is ours. Mr Gunner made no reference to it.

He said a consultation group of Aboriginal and other experts will be formed next month.

And  a design competition “to realise more than a building, but an architectural symbol of remote Australia” will be launched this year.

Given that the government’s commitment of $50m to the project will not flow until 2020-21, the Alice Springs News Online put questions on Monday to Tourism and Culture Minister Lauren Moss about budget allocations for both these steps, as neither comes cost-free.

In our report Minister Assisting Chansey Paech also spoke of curation starting this year. Again, we asked Minister Moss about a budget allocation for this.

We will report the answers when they come to hand.

Mr Paech aslo referred to a shortlist of government-owned land being made public for community consultation before the end of the financial year. A number of our readers have had suggestions to make (among them the former Melanka’s block although is is not government owned and has a $10m price tag on it). Mr Gunner did not refer to the shortlist.

Following is the text of the Alice Springs section of Mr Gunner’s speech:-


Alice Springs is the beating heart of outback and indigenous Australia.

What a special place, where to step onto the street is to hear half a dozen ancient languages. Where ancient songlines begin, traverse and connect.

I see Alice Springs as Australia’s inland capital, a cultural nucleus, a place every international tourist and every school group from Hobart to Broome must visit to better understand our rich and living Indigenous histories.

This town may be iconic, but growth is stagnant.
The removal of the electorate of Greatorex prior to the election was one of the more obvious consequences of a population not keeping pace.

Less visible is the worry of contractors and tradies at a drying pool of jobs.

Beginning this year our Government will invest in Alice Springs in a way not seen for decades.

The nationally-significant iconic Indigenous art gallery will be the centrepiece of an Alice Springs revitalisation.

This is about venerating the tens of thousands of years of continuous cultures that came before any white man ever considered a great southern continent.

This is about celebrating the resilience of these cultures.

That you are special.

The work begins next month when we form a consultation group of Aboriginal and other experts.

This year we will launch a design competition to realise more than a building, but an architectural symbol of remote Australia.
This building will eventually be the beginning of an arts trail linking upgraded or new galleries in Tennant Creek, East Arnhem and Katherine all the way to Darwin and a new CBD museum.

Like in Darwin, the Alice Springs CBD can be so much more.

We must make it more appealing to locals, prospective locals and tourists.

We have begun hearing ideas around creating a central, attractive and welcoming meeting place, where locals and tourists can gather to grab a coffee, a meal, shop and find all the information they need about the region’s tourism offerings.

This may mean creation of more open spaces in the CBD and road re-design. It may mean a park or water and rock features. It will certainly mean showcasing the unique art and cultures of Central Australia.