Hard day in court ends with gesture of catharsis 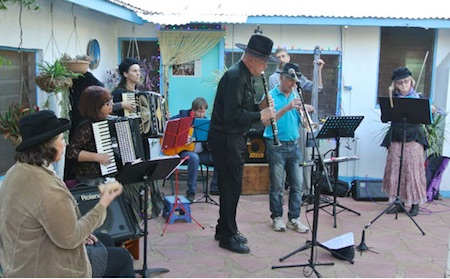 By RUSSELL GOLDFLAM
The barrister and talented musician is the fourth writer in the Rest & Reflection series we publish over the summer holidays. He is pictured at left with local klezmer band Rusty and the Infidels and below being grilled as a witness before the Royal Commission.

As you know from TV, we barristers get our kicks by making a shifty witness squirm on the hook we have carefully baited for him.

“You consider yourself a reasonable man, don’t you?” was the first question an exceptionally skillful QC asked a witness in a case I was once involved in, before confronting him with an excruciatingly lengthy list of the manifestly unreasonable things he had done.

I was enthralled by the methodical dismemberment that followed.

So it was a sobering experience for me the other day when I found the tables turned, and myself on the end of a barrister’s hook.

I had been called to give expert evidence in the Royal Commission into the Protection and Detention of Children in the Northern Territory.

I’ve been in a court room thousands of times, but only very rarely in the witness box.  And this time there seemed to be more barristers at the bar table than disciples at the Last Supper.

And some of them had a bone to pick with me, because a few months ago I had come out in support of some controversial amendments the former government had made to the Youth Justice Act concerning the use of restraint devices.

This is not the time or place to discuss that thorny issue.  What I want to reflect on is how the experience made me feel.  In a word, awful. Just like many of the witnesses I have cross-examined myself, who must have felt awful too.

I don’t blame myself for rigorously and vigorously testing them: I have a professional duty to the court and to my client to do so.  But from now on I will be more careful to avoid doing so with relish.

Courtrooms are places of punishment and pain and shame.  Occasionally, however, they can also be places of catharsis and reconciliation.

In the middle of this year I was a barrister in a murder trial that stretched out over three weeks, during which my accused client and members of the victim’s family present in court glared and occasionally hurled abuse at each other.

Eventually, the jury was sent out to consider their verdict, and quite quickly came back with it: guilty.

It was about 3 o’clock in the afternoon.  The judge told us all to go away and come back in an hour for sentencing.  We all knew that sentencing wouldn’t take long, as Northern Territory law provides that there is only one sentence for murder: life imprisonment, with a minimum 20 years to serve.  I think this is an unfair and stupid law, but this is not the time or place to discuss that thorny issue. 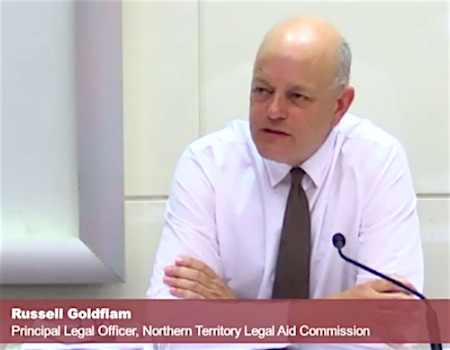 We all came back at 4 o’clock, and the sentencing hearing started with the reading of a victim impact statement that had been signed by about thirty members of the victim’s home community, a remote place where traditional law still holds sway.

As this potent, portentous statement was being recited, a peculiar, percussive rumbling started.  It turned out to be the freak hailstorm which lashed Alice Springs that day.

A little later, as the judge proceeded to sentence, the hail, which had by now penetrated the roof of the courthouse, set off the fire alarm.  The judge, shouting to be heard above the sirens, didn’t budge until he had pronounced his punishment.  Neither did anyone else.

The moment he finished, everyone in the court was ushered outside in a rush, where we all found ourselves huddling together on the courthouse portico, sheltering from the storm, which had started again.

And that is how my colleague and I were brought face to face with the family of the woman our client had murdered, the very people we had been careful to studiously avoid over the last few weeks, except when I had been obliged to make some of them feel awful in the witness box.

There was only one thing to do, and we did it: the customary offer of a hand. To our immense relief, each member of the family came forward and accepted our formal gesture of condolence.