Home Issue 9 Dylan Voller will give evidence in person, not by video link
Issue 9Volume 23

Dylan Voller will give evidence in person, not by video link

Above: A rally held in Alice Springs yesterday to mark Human Rights Day called on the community to  support Dylan Voller and family. Arrernte Kaytetye woman Christine Palmer, speaking at the rally, thanked “the people who brought out that footage of what they did to our children and kept it hidden from us.” PHOTO courtesy the organisers. See interview with a spokeswoman for the rally organisers in the report below.

Dylan Voller – the boy, now a 19-year-old man, who has become the face of the NT’s disgraced juvenile justice system –  will tomorrow tell the story of his experiences in person to the Royal Commission into the Protection and Detention of Children in the Northern Territory.

He was reported to be afraid of giving evidence by video link from gaol, in the presence of guards, but he will be brought to the Darwin Supreme Court, the Royal Commission has announced. 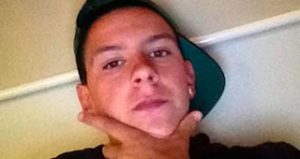 Described as “a vulnerable witness”, he will be heard in a closed session. Only the Commissioners, Counsel Assisting,  Mr Voller’s legal representatives, support people nominated by Mr Voller and technical staff will be present. However, the session will be streamed publicly via webcast.

Meanwhile the Alice Springs News Online asked the spokeswoman of yesterday’s rally, Meret MacDonald, about how she would have acted as a prison officer in two of the televised scenes that sparked public outrage: The stripping naked of Voller, aged 10 at the time, and his being made to wear a spithood and being tied to a chair.

We put to Ms MacDonald that in the first case the prison officers were obliged, by regulation, to remove Voller’s clothes, which could be torn into strips and used as a noose, and replace them with a gown that cannot be torn.

She said: “You don’t strip children and leave them in isolation chambers for up to 24 hours because you’re worried about them self-harming. You get proper psychological care. These guards are trained fighters. They are not trained carers.”

We asked: “If someone spits at you and you are required to deal with that person, what would you do, other than making them wear a spit hood?

Ms MacDonald said people dealing with juvenile offenders should have “training in de-escalation tactics, especially if the young people are highly traumatised, rather than fitting them with spit hoods, stripping them, isolating them. There are ways you can deal with young people to de-escalate”.

We put to Ms MacDonald that this would be a protracted process, not suitable, for example, to transfer a detainee from one place to another.

She said: “I think there should be a system that uses de-escalation methods. I’ve spoken to people in Alice Springs who have worked with young people who are in Don Dale now.

“They said to me in all their time as carers of those young people, they never had to restrain them in that way, or use spit hoods. The issue is, these guards are not adequately trained.”

The Royal Commission, announcing its arrangements for hearing Mr Voller, says its decision to close sessions involving vulnerable witnesses is made case by case and based on expert advice sought by the commission about measure to manage any risk to the witness’s safety and welfare.
This includes an assessment by a psychiatrist, psychologist or counsellor as well as advice from legal representatives of the witness.

Following Mr Voller’s evidence, the Royal Commission will hear from Antoinette Carroll, a youth justice advocate who worked with Mr Voller for seven years. This will also be a closed session and streamed.

Actions of guard found to ensure ‘safety of Dylan Voller’